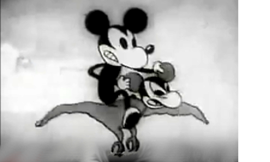 Some screwy links to keep you thinking today. Gary Teetzel forwards us a URL to a 1936 Japanese propaganda cartoon given the makeshift English title Evil Mickey Attacks Japan. That’s exactly what it is. Happy Japanese — people, animal people and quasi- Yokai characters frolic and dance on a tropical island (obviously not Japan) until American monsters bring war — evil machine-gun snakes, crocodile ships and Mickey M. himself riding a bomber bat with mouse ears. Traditional Japanese characters retaliate. What can we say? We could really use a Japanese culture expert (hey Stuart!) for some insight on all the visual references. From Gary: “The actual title is “Toybox Series 3: Picture Book 1936.” Why that particular year? One website speculates that it has to do with the looming 1936 expiration of a Naval Treaty; alarmist Japanese politicos predicted that the U.S. would attack right after it expired. Some speculate that the short thus shows traditional Japanese culture pushing back against the pervasive inroads of western (American) pop culture.” 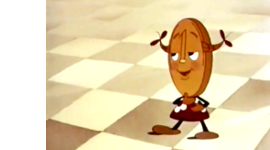 These things are addictive. The vintage Japanese animation led me directly to some good old-fashioned Soviet propaganda, a color cartoon translated as Valuable Kopeck. Happy Soviet currency makes friends and dances with (stereotyped) coins from around the world, while the evil, capitalist American penny only brings guns and war. A cute, feminine Kopeck undergoes some kind of currency change. Animated Soviet propaganda can be really scary. This one isn’t as dark as Stalin-era pieces but has a pretty steep creep factor. The person who posted the cartoon on YouTube gives it a 1949 date, but judging from the appearance of some passenger jets we see, it must really be from the 1960s.

The Warner Archive Collection has announced its July Blu-ray lineup. I’m told that the animated Batman: Mask of the Phantasm is quite good. Skipper John Wayne is a good German in The Sea Chase and a Commie hater in Blood Alley. And a welcome guilty pleasure is Where the Boys Are with Paula Prentiss, Connie Francis, Dolores Hart, Jim Hutton and Yvette Mimieux. For this kid WTBA is pure nostalgia: at age 8 in 1960 I thought this is what being a swinging student would be like if I went to college. Boy, were things different in 1970. 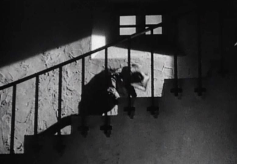 And the biggest announcement this week is that Kino Lorber will indeed be putting out a 3-D Archive– engineered Blu-ray 3-D disc of William Cameron Menzies’ The Maze. The Walter Mirisch production from 1953 uses the depth format well, for an appropriately spooky haunted castle story with a wholly unexpected monster. I got to see this at the Egyptian a few years back, with Walter Mirisch in attendance (and his son, my college friend Larry). 3-D fans will rejoice. It’s expected in the Fall.