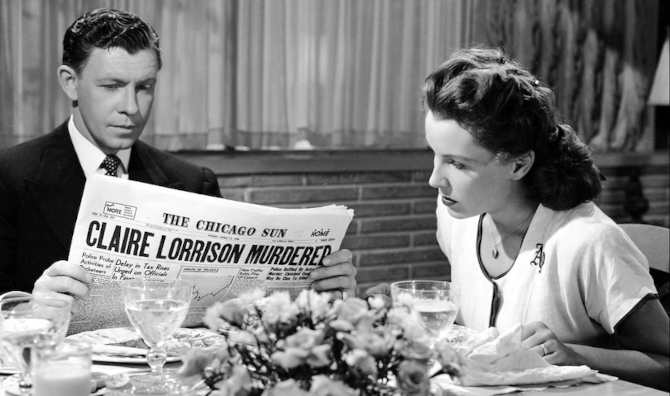 According to my logs, Turner Classic Movies is showing a not-easy-to-see Arch Oboler film tomorrow, February 23, in the middle of the day. It’s The Arnelo Affair and I doubt it’s a classic, but I’m curious anyway. After studying Oboler with Matt Rovner for extras on a disc of Oboler’s movie Five I want to see everything by the erratic, eccentric man, the director of Bewitched, Bwana Devil, The Twonky, The Bubble and several other pictures that are even more obscure.

I guess The Arnelo Affair is a ‘cross off the list’ title. It stars George Murphy, who’s normally a snooze, but along for the ride are John Hodiak, Dean Stockwell, Frances Gifford and Eve Arden.

About cable and streaming, and DVR recording from cable: Friend Alan Peach is right, Turner Classic Movies streamed on Apple TV delivers a more reliable image than does my Spectrum Cable company. Alan set me up with the TCM app on the device and I hadn’t used it too much. But random TCM movies I DVR from Spectrum keep exhibiting funky frame rate issues, dropping and adding frames. This happened last week with the Randolph Scott movie The Bounty Hunter — my DVR encoding had playback problems. But on the TCM streaming app the picture was fine.

Huzzah, another 1st world dilemma resolved, sort of. Cable is expensive, and I tend to watch the same 6 shows while mostly watching video discs for entertainment. Is TCM being subsidized to stay cable-exclusive, so as to keep cable customers?  If I could stream TCM, the networks, a local station or two plus BBC World News America, my cable would go bye bye very quickly.

↓  And finally, long-time CineSavant correspondent Malcolm Alcala comes up with a good one, a photo borrowed from the highly-recommended Peplum TV page. It’s a behind-the scenes snap from one of the Francisi Ercole movies that made Steve Reeves a star. We know that’s Sylva Koscina seated, but can anyone identify the gentleman posing with Steve?  Malcolm suggests that it’s Reeves’ body double, which was the whole joke I’m sure. Anyway, what could be cooler than those two stars on an Italian beach, in 1957?

The PeplumTV site is good for all kinds of arcane news about sword ‘n’ sandal costume pictures. Presently, not far down on the page, is a comparison of several import versions of Robert Aldrich’s Sodom and Gomorrah. 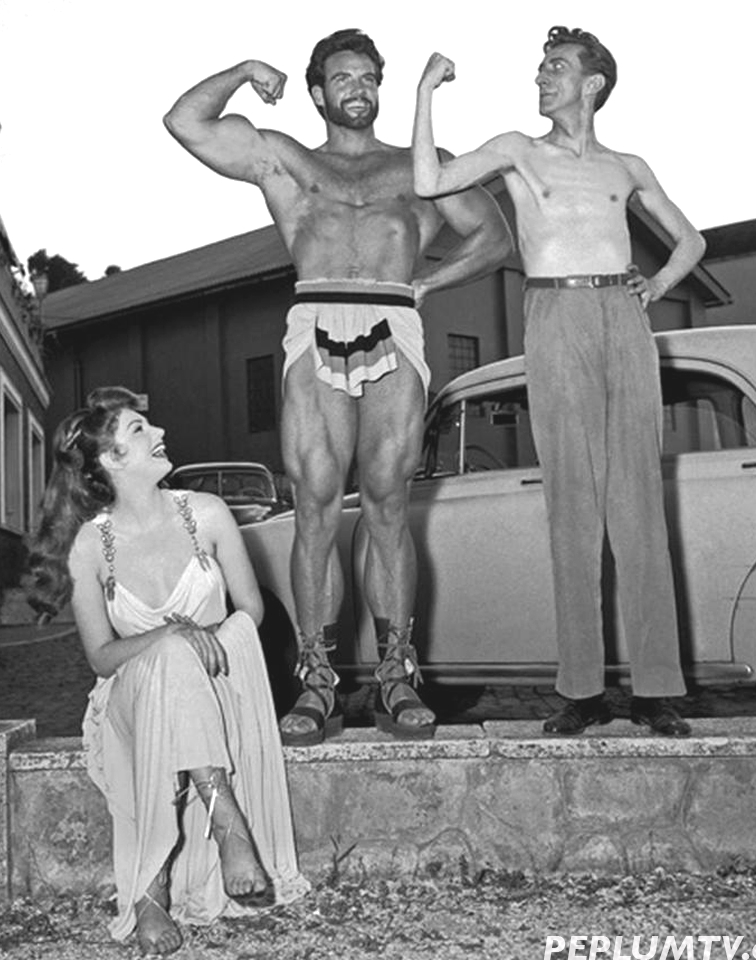