This comes under the blanket of ‘here’s hoping’….

Note: 8am: This is already obsolete! The Warner Archive has just officially announced the Gordon Scott adventure Tarzan’s Greatest Adventure.

Note: 12:30pm: Obsolete strikes twice! The Warner Archive has just officially announced a disc of The Thing from Another World in a new master. I will be interested to hear what kind of restoration has been done. Good news!

Note: 4:30pm: Obsolete are Us! Now the WAC has announced Dark of the Sun as well!. I’d better remember that Tuesday morning is the wrong day to speculate about Warner Archive releases…

So, are these discs really coming, or are they not? The Warner Archives hasn’t announced them, but they’re up on Amazon with dates of November 6 for the (excellent) Tarzan movie, and November 20 for the delayed Rod Taylor thriller and the classic Sci-fi movie.

The text blurbs on the Amazon posts sound real enough, but The Thing from Another World is also listed as ‘currently unavailable,’ which contradicts the given November 20 release date. Are all three posts real?   The Warner Archive Collection could announce them momentarily, making this post obsolete. Amazon is taking pre-order money for Dark of the Sun and Tarzan’s Greatest Adventure, so those seem legit, as if Amazon just jumped the gun on an official WAC announcement. Maybe. 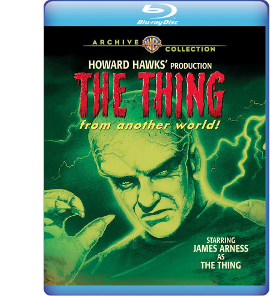 We wonder about The Thing because it’s a show with ‘known problems.’ Just a few years ago it was on a short list of RKO titles for which Turner had been unable to locate prime printing elements of the original uncut version. The version presently being shown on TCM has been adapted for widescreen, cropped. Several minutes of its running time revert to inferior 16mm quality.

I think it would be great if Turner/WB had found a way to rejuvenate The Thing (and its sister film The Big Sky, which suffers from the same issues). But when the company was able to restore The Sea Wolf last year, they told us about it months ahead of time, and gave it a fancy re-premiere, a TCM Fest screening, the works. So I prefer to be skeptical now, so as maybe to be pleasantly surprised later. I’m sure WAC will be letting us know more about this soon. Other news: Olive Films has announced a disc called Mr. Capra Goes to War: Frank Capra’s WWII Documentaries for November 6. The set includes Tunisian Victory, Prelude to War (the first of the Why We Fight films), The Battle of Russia, The Negro Soldier, and Your Job in Germany. The key to desirability on these will be quality — we’re accustomed to seeing some of these in poor condition.

For November Twilight Time is touting the ’72 Antony and Cleopatra, Stanley Kramer’s Oklahoma Crude, the silent The Iron Horse and Nicholas Ray’s The True Story of Jesse James.

Also in November Kino has the second half of its Outer Limits set, its Pioneers: First Women Filmmakers box; a Mamie Van Doren Collection, the Ray Milland films A Man Alone and Lisbon, and the Robert Aldrich films The Grissom Gang and The Killing of Sister George. I only remember seeing snippets of Lisbon on TV… if my memory is correct its soundtrack features “Lisbon Antigua,” one of the most popular instrumental themes of the 1950s. Kino also just announced that they’ll be putting out Universal’s The Land Unknown early in 2019, featuring ‘unbelievable special effects.’ Well, some of them are actually very good.

Finally, Gary Teetzel offers two last-minute links with a happy Halloween theme. In the first, a collector in England has come forward with a Rediscovered 1953 horror film starring Stanley Baker. And Indiana University is going to repremiere a rare Japanese Horror film, 1938’s The Ghost Cat and the Mysterious Shamisen. I concur with the use of the word ‘rare’ — the Hardy Encyclopedia of Horror, which draws from international releases, doesn’t list a single horror film for the year 1938.