Since the day my review of  Sodom and Gomorrah came out readers have been writing in complaining that it’s unavailable. Some have found copies online but usually with smaller import distributors. If you’ve sought the disc and come up empty, there’s a reason. I talked to Explosive Media’s Ulrich Bruckner, who confirmed that Amazon.de has had no copies of the disc almost from the beginning: “Derzeit nicht auf Lager.” That’s because they sold out early in December — Ulrich was barely able to liberate a review copy for CineSavant.

I don’t generally inquire into business particulars with disc releases, as you never know when the simplest information is considered proprietary.  But I was told that although Sodom and Gomorrah is sold out, in a few months it will be reissued, reportedly with a different cover but identical in content. I’ll be sure to make an announcement when that happens.

So if someone wants to sell you an OOP copy of Explosive’s disc for hundreds of dollars, try and hold out. The word on Der Straße is that if you can wait a little while it will again be within reach. But remember the warning of the Helamite commander Segur: “Watch out for Sodomite patrols!”

Next we have, courtesy of David J. Schow, a Vimeo encoding of the 25 minute faux-documentary Focus on Fishko (1983), a comedic satire about ‘historic’ movie docus. It stars the late Howard Hesseman in the title role. I noted actor Joe Silver as well; Angela Aames and Ray Colbert feature in the movie take-offs.

If the format reminds us of the old-movie spoofs of Amazon Women on the Moon it’s because it was written by that film’s Michael Barrie and Jim Mulholland. The comedy in the skits is broad but accurate, with glimpses of smash hit Fishko titles like They Froze Hitler’s Head and Revenge of the 80-Foot Stripper.

Joe Dante told David Schow that Focus on Fishko was a segment of a Pay-TV show called Likely Stories. The irreverent paean to an arcane director reminds me of Dante’s own monograph on the equally fictional Hollywood giant ‘Walter Paisley,’ from a well-remembered issue of Cinefantastique. Careful, a couple of scenes are NSFW- adjacent (if anybody still works in an office). 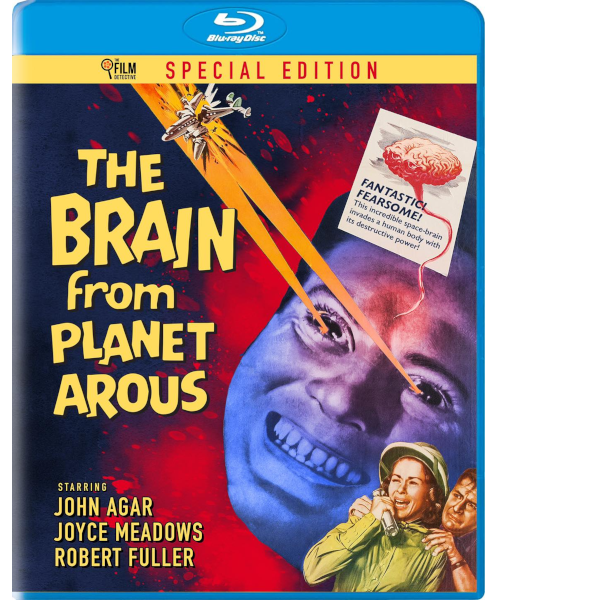 And finally, advisor Gary Teetzel rushes in the news of a Blu-ray announcement from The Film Detective for yet another can’t-live-without-it 1950s creature-feature, the immortal classic The Brain from Planet Arous. This brain-centric opus happens to be a favorite — it’s another absurd sci-fi romp about mental possession, this time featuring baleful bouncy bulbous brains from outer space with bulging basilisk-like eyes. Actor John Agar was tortured by being required to wear contact lenses bigger than poker chips. His grinning, slobbering scientist would seem to come from the Planet Aroused.  And how did all this loose talk about a ‘Fissure of Rolando’ get past the Production Code?

The specs say that the disc will include a Ballyhoo featurette, and will also be presented in dual aspect ratios. Is that to please commentator Tom Weaver, to bring back fond, square-screened memories of Chiller Theater?  No excuses need be made for this one — the show has always been great fun.