CineSavant will be going relatively quiet for a week or so across this year’s Holiday, so we’re getting our Horror fun out of the way now:

Here’s a Book Review for Tom Weaver’s latest fanta-opus, Sardonicus – Scripts from the Crypt #11, the book series through Bear Manor Media. This time around Weaver and his cohorts alight on a 1961 William Castle ‘shocker’ that’s maintained a certain reputation despite not performing as well as any of his previous 5 horror pix. I personally like it much better than Castle’s most successful, Homicidal. And this book review gives me an opportunity to detour into several personal tangents.

I wasn’t a horror film attendee as a tot but I was intrigued by the posters for House on Haunted Hill and The Tingler. I also remember being frustrated when my older sister got to see 13 Ghosts and then wouldn’t answer questions about the ‘ghost viewer’ she brought home . . . It must have been a family conspiracy not to warp my 8 year-old mind. The only actual Castle film I saw in a theater was the later The Night Walker, when the producer-director was fumbling several unfunny horror comedies and striking gold again with his bizarro Joan Crawford show Strait-Jacket. It didn’t matter, as all sins would be forgiven when Castle produced the superb Rosemary’s Baby, one of America’s best mainstream horror pix ever. 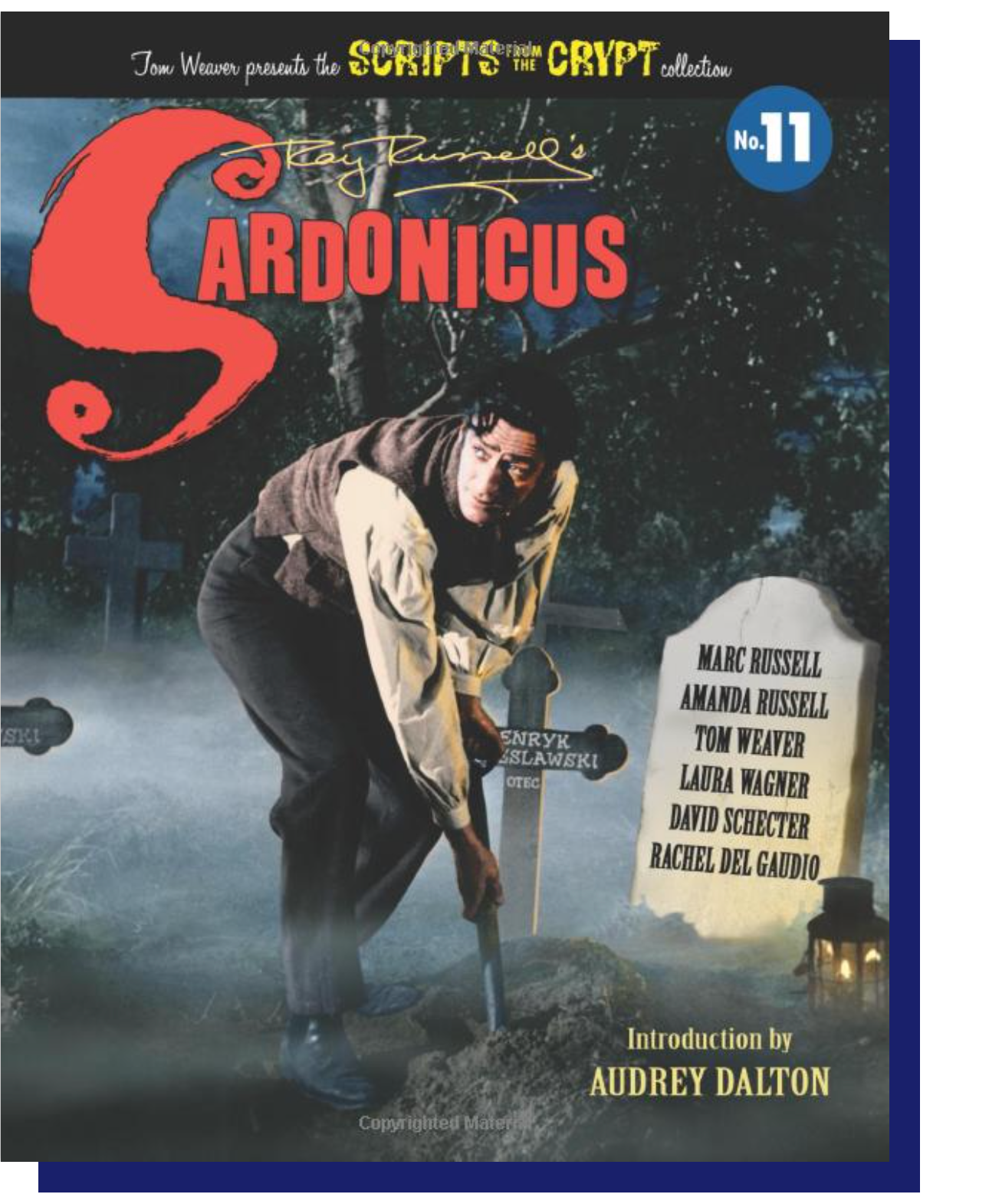 The center of interest is a scary makeup for the Baron, which in the film is briefly glimpsed only three or four times. The one classic sequence in the film is the graveyard scene, which benefits from Guy Rolfe’s sympathetic performance and a graphic shot of a decomposed corpse that seems very advanced for  1961 Hollywood — the darn thing made us jump back half a foot, even though Castle’s direction is merely adequate.

Why does Mr. Sardonicus remain a sticking point in my adult psyche?  I learned the lore of Castle’s Columbia horror oeuvre through Famous Monsters magazine long before I got a look at the pictures themselves. One early issue I saw at age ten printed a mug shot of Baron Sardonicus’s horror-face, an image that I found nightmarishly disturbing … that impossible rictus with more teeth than a Tyrannosaurus Rex, resting below eyes that looks relaxed, at ease. It took me years to figure out what was so psychologically unnerving about it.

Tom Weaver’s book is something of an organized collage. The backbone is Weaver’s own making-of essay chronicling the filming of the show, its publicity, its ‘Punishment Poll’ gimmick and the fallout from exhibitors and the public. Accompanying the film’s entire shooting script are chapters from other writers. Music expert David Schecter wades into Von Dexter’s soundtrack score, Laura Wagner contributes detailed career articles on actors Guy Rolfe and Audrey (swoon) Dalton, and Library of Congress archivist Rachel Del Gaudio writes up a combo- horror fan memoir and visual analysis of the film’s themes.

Weaver’s own writings give depth to a film that in many ways is not all that distinguished. Weaver has no illusions about William Castle, a director who started by emulating Alfred Hitchcock and attending to Orson Welles before settling into a minor groove at Universal and elsewhere. Castle’s hucksterism seemed derivative, even if his ‘carnival advance man’ appearances predated Hitchcock’s in-person presence in film trailers — Castle took his cue from Hitchcock’s marvelously droll bookend cameos in his TV show. It’s fun reading about Castle’s less than respected reputation in Hollywood, where crews either treated him as a pretentious pretender, or (more likely) a slippery climber. He must have been a special case to stand out from the 1,001 other obnoxious Hollywood climbers. Castle’s main writing collaborator Robb White couldn’t resist nailing his employer in an interview (from Filmfax, I think). Castle was in no way prosperous but went to great lengths to affect celebrity airs. ‘Forced’ to hitch a ride in White’s volkswagen, Castle brought along a phone receiver and cord, and pretended to be carrying on a radio-phone conversation in the car, so people would notice him at intersections and think him a bigwig. The joke is the fact that he’d try the gag in a lowly VW bug. 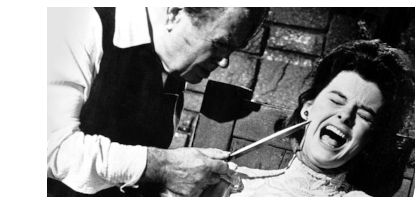 But back to the review. Tom Weaver offers more amusing examples of Castle’s odd methods of self-aggrandizement, along with the facts of the Sardonicus shoot. Weaver had access to a pre-production schedule but not actual production reports, so he’s careful when explaining which scenes were filmed in what order. He also must wade through every dubious publicity announcement, statement and interview quote from William Castle: the producer-director cultivated his mini-celeb persona through pure publicity flackery. Everything he said that wasn’t untrue, was an out-and-out lie. He gave out multiple stories for how shows began, who came up with what idea and how actors were hired.

Castle wasn’t psychotic, just practical: he made very cheap, un-newsworthy films, and knew that unless he hyped everything his work would be invisible. That approach worked well for several years. The cheapo pictures multiplied Columbia’s investment and gave him an excellent relationship with the front office.

Weaver adds some collected reviews and ‘script to screen changes,’ plus anecdotes and news blurbs about the director and his actors. We learn that Guy Rolfe was sickly, and that in England he had played mostly ‘handsome leading man’ parts. Audrey Dalton is still with us; she provides an introduction and does her best to recall good memories of the picture. She remembers Oscar Homolka as a big personality who gave the show a needed boost by purposely injecting some humor into his role. Why not?  Homolka got first billing, even above Ronald Lewis’s dull hero.

The best thing about Scripts from the Crypt / Sardonicus is what we learn about writer-screenwriter Ray Russell. With significant input from Russell’s children Marc and Amanda, Tom Weaver fashions an in-depth portrait. In the early 1950s Russell went from a barely-published short story writer to associate editor for Playboy magazine, all on the basis of two stories he’d submitted to Hugh Hefner after they were turned down elsewhere. Russell spent a decade in Chicago overseeing most of the text content of Hef’s magazine; he’s the one responsible for hiring fantasy-friendly writers like Ray Bradbury and George Langelaan. Russell also used Playboy to get more of his own work in print, such as the novella Sardonicus. We get the full story on Russell’s ambitions, his migration to Los Angeles courtesy of William Castle’s film, and his subsequent writing work on the two excellent Roger Corman pictures that became his most prestigious credits.

Finally, the book reprints the entire original Sardonicus novella. It is easy to see why it appealed. Russell affects a vintage writing style, making full use of antiquated formalities, that gives it a great ‘curling up with a spooky old book’ feeling. William Castle’s film has its moments but comes off as mostly flat and conventional when it needed to be stylish and mysterious. I dug up my copy of a Playboy reprint from 1964 (just above, with its color illustration). The novella seems more like a short story — it fills just 11 pages.

Scripts from the Crypt / Sardonicus also discusses the film’s bizarre makeup at length. The book is informative and its affectionate ribbing of William Castle is funny. Even with only a moderate interest in the movie, I found it to be a rewarding, valuable read, especially the Ray Russell bio.

And we hear from correspondent & advisor Gary Teetzel once more before 2021 sinks into the past … this time he’s come up with a Variety article from April, 1959 that’s an early trade paper look the increasing popularity of Kaiju Pix on American screens: Rashomon may win awards but big rubber monsters were doing booming business. The writer Dave Jampel appears to be unaware of Columbia’s Toho aquisitions, but he has good research on the little business partnership that imported and re-worked the original Godzilla and good info on some subsequent imports and retitlings — with production and licensing price tags attached.

The helpful article confirms a bit of arcane Kaiju lore: Toho indeed initially formatted its movie Daikaiju Baran (later, Varan The Unbelievable) as four half-hour TV shows, and tried to sell them to American television. That really makes sense considering that the show appears to conclude more than once. The article calls the movie “Valan” — did Jampel hear the title over a telephone?  The reporter offers some quotes from Eiji Tsuburaya; we wonder if he simply translated them from a Toho publicity sheet. In any case, the article is at this link, bearing a very Variety-speak title headline: Japanese Arters Wow Critics, But Horror Films Get Coin.

On the same Variety page we’re told that Carol Reed’s Our Man in Havana is about to shoot in Cuba, just four months after Castro’s revolution — and our film Guilds ask that all foreign-produced ‘runaway productions’ be banned because they employ communists!

Thanks for reading! Enjoy the holiday — Glenn Erickson