A quick book review today — really a nod, perhaps — to a book that sounded too interesting to pass up. Foxx Nolte’s Boundless Realm: Deep Explorations Inside Disney’s Haunted Mansion is for committed Disneyland fans, not necessarily casual fans like myself but for people that already know much of the development history of the parks and are ready for something more — more detail and thought. For detail, insightful conjecture, and rather good writing, the book delivers. 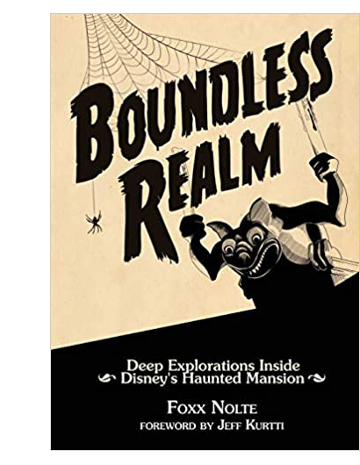 The focus on The Haunted Mansion(s) leads one to expect something that the book is not. In his first chapter Nolte explains that he has not written an introduction to the Disneyland and Disney World attractions, nor a history of their development or construction. Nolte instead tells us that in college he got his dream job, which allowed him to work at the Mansion in Disney World. His book is a collection of studies, observations and acquired knowledge about the attraction — how it works, how some of its design elements were developed, and in particular a great many hidden meanings within the design choices… for instance, how certain rooms were conceived for one kind of ‘illusion-attraction’ but ended up with another.

This involves telling some historical backstory (some good spook-house stories, there), culture and literature, and architectural stylings — is the Mansion Victorian, or something else? — and even relating themes from relevant movies. And there’s also a lot of ‘backstage’ employee weirdness — where on the ride the ‘ushers’ stashed their soft drink containers, and what urns in the back of which mansion room are filled with random shoes lost by riders. How they became lost, we’re not told.

I personally first saw Disneyland’s Haunted Mansion on a graduation night in 1970; I was impressed by the weird elevator room, the ghost illusions in the ballroom and Paul Frees’ spooky voice. The book really is intended for a more die-hard fan, the dedicated Disney-dog already familiar with the basics, and is ready to sign up for ‘Haunted Mansion 102.’ Every aspect of the ride is examined, including discussions of conflicts during the design process, abandoned ideas, and what seems to be a focused concentration on every single thing a rider sees and experiences during the ride.

The book is clearly not a Disney publication. Although nothing is controversial, the inner workings of Disneyland is exactly the material The Mouse routinely suppresses. This is all hard content — the illustrations included are explanatory diagrams of things like window patterns for a ‘ghost light’ effect, sketches explaining how individual gags work, and illustrations of particular pieces of interior design that Nolte is discussing.

I’m told that the publishing date for the book was April 18, although Amazon says October 1 of last year. Frankly, if I knew a genuine Disney park Nut, this would make an ideal gift.