Gee, the holidays are almost here, and CineSavant’s elfin associates are bursting with great ideas for ‘interesting’ Christmas gifts. The last couple of days has seen the CineSavant emailbox filled with terrific suggestions for horror and fantasy themed Christmas Tree Ornaments… you know, the kind that your mother would demand you take down, were you to sneak one onto a bough of holly. (Note the boughs of holly just above. Festive thoughts need graphic reinforcement.)

The barrage of gift suggestions began with a highly unlikely candidate suggested because of our unrestrained love for a noted Iberian filmmaker, whose glory is so exalted that he deserves a place on every tree. He’s top-center below, dressed as Santa, although I think the Fez comes from one of his unforgettable film roles. It was found at the Little Shop of Gore, but I didn’t see it there today… the Severin people posted it, and then Tim Lucas shared it on Facebook.

Also up, more amazing delights to cause family members to accuse you of destroying the Merry good cheer vibe:

a Michael Myers commemorative mask
and a Phantasm Death Sphere.

And I was asked, how can I live without these gems?

A Darth Vader diorama,
our favorite aquatic mouth-breather
and, in honor of a bold man of 2020 who may be our savior in 2021,
there’s The Fabulous Dr. Fauci.
Hopefully the national theme, on January 20 will become, “Fauci Unchained.”

This year we’re being entreated, of course, to cancel out our biggest family gathering holidays of the year. Don’t travel!  Tie yourself to a tree with roots!  Embrace the stay-at-home glow of responsible citizenship. It’s Harrow Alley * out there, folks, and none of the news is fake. 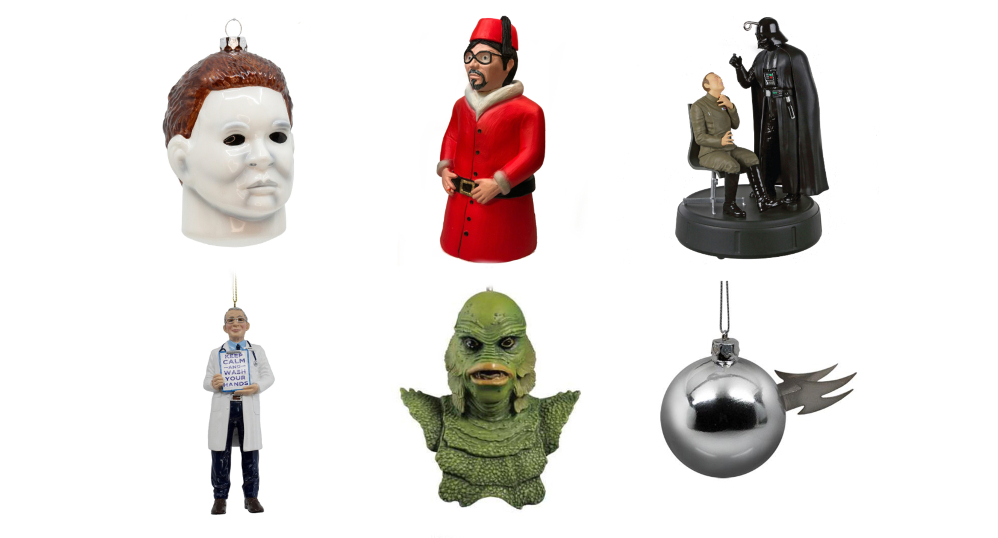 * Harrow Alley is, or for a long time was, the hands-down winner as best un-filmed screenplay. William Froug at UCLA wrote about it when we were students. When we read it we thought it was the perfect epic for Roman Polanski, and imagined Bob Hoskins, Tim Roth, Timothy Spall and others in key roles. Written in the 1960s, it was thought too grim and too expensive. And now the world is living it.