Hello! This is a special fun day, both for reviews and CineSavant Column links! 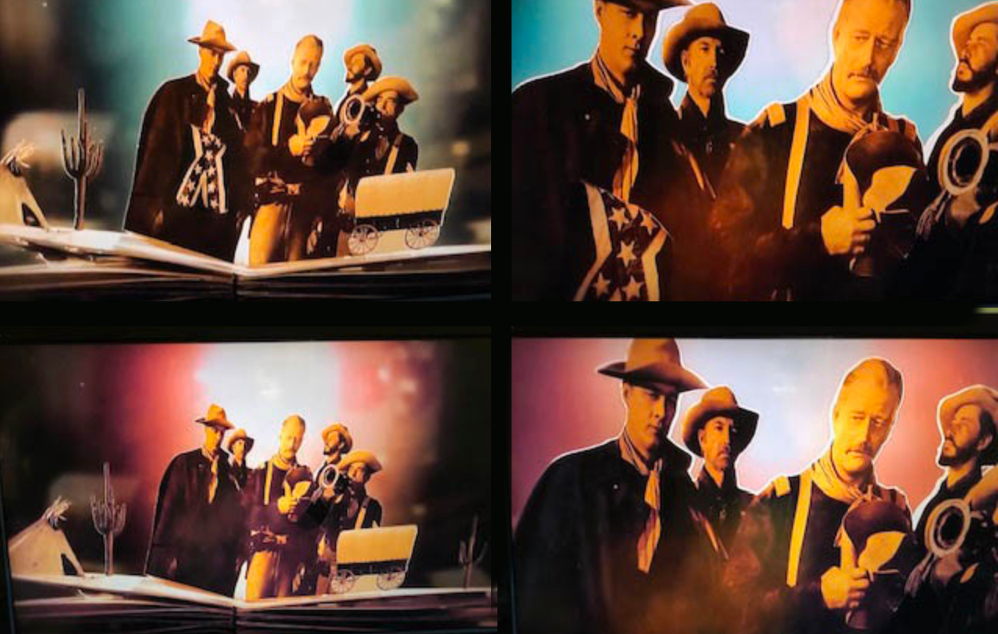 Sharp-eyed correspondent Mark Forer has spotted and documented something very interesting on the Turner Classic Movies cable channel… a little PC polishing of the corporate image. One of TCM’s beautifully crafted feature intro videos is a ‘Pop-Up Book’ in which various movie still photos fold up and out as in a children’s book. TCM’s graphic design and editiorial is so sophisticated, I can’t tell if someone actually created a book, or if it’s all a digital effect.

The four images above get bigger when opened in a new window. The top two snapshots were taken on April 8 — lots of us have old TCM cablecasts languishing on our cable DVRs or Tivos. It’s a scene still from John Ford’s She Wore A Yellow Ribbon, that I think represents the funeral of a cavalry officer who had fought for the South in the Civil War. ( ↓ ) John Wayne of course presides, and Trooper Tyreen (Ben Johnson) holds a confederate battle flag, in honor of the officer’s failed cause. 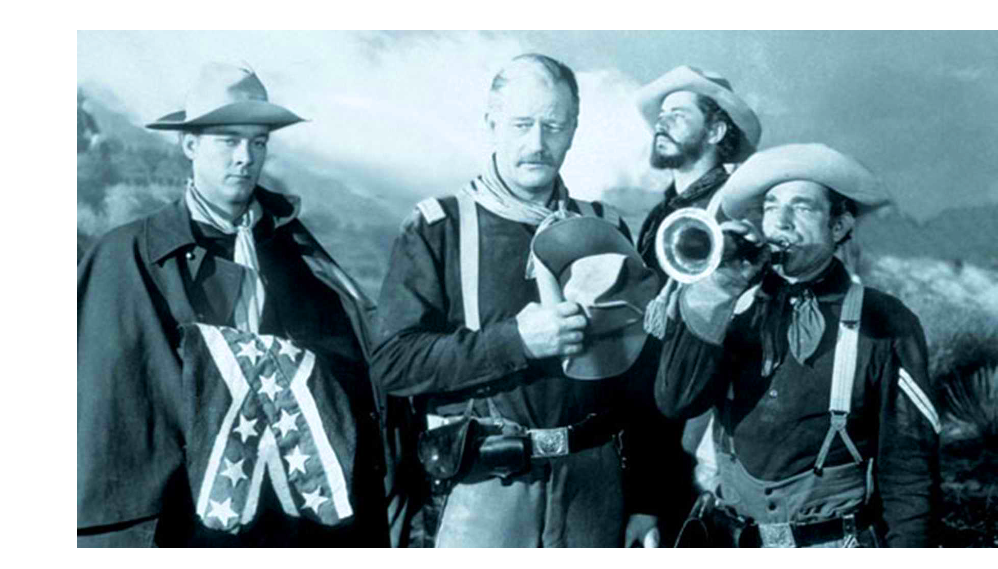 Ah, but the cold hand of the Ministry of Truth at TCM has deemed the confederate flag to be a hot potato. The bottom two images show that the flag has been erased, as undesirable.

Very interesting… cancel culture and overzealous PC policing is dangerous, as it can make us liberals look like Commissars enforcing a conformist viewpoint. As Mark pointed out, almost all the older movies on TCM are going to have issues with Political Correctness. He asks, what will be the next movie or image to be run through a political filter and found wanting?

Note that my review of Gone With the Wind, like almost all readings of the film for the last thirty years, makes note of its essential rancid racism. I don’t know if the show is presently on furlough from TCM screenings. But I don’t for minute think that TCM will start vetting old movies and performing censor cuts. That would wipe out most of the Turner library!  Remember the companies that offered to cleanse movies to make them palatable for conservative families, editing out bad language and inconvenient progressive ideas?

TCM likely views those interstitial videos as a display of their corporate identity, and thus the rebel flag had to go. By the way, we still love the old TCM intros. My favorite is still “Look for the Silver Lining.” Bring that back in some form or another. Put any flag in it you like.

Forgive me, for both of today’s blurbs for upcoming discs are illustrated with completely unnecessary salacious & sordid images, which I know I haven’t included enough of lately! 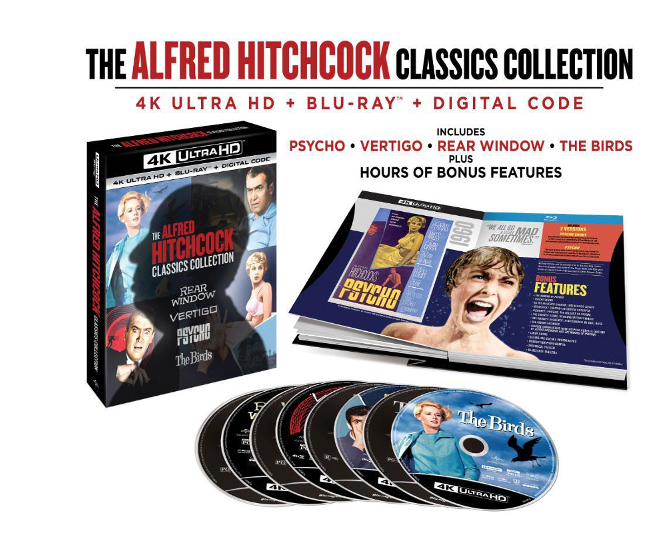 Universal’s newly-promoted The Alfred Hitchcock Classics Collection 4K Ultra HD Blu-ray promises marvelous new encodings of four great Hitch Pix that I’d love to revisit in 4K: Rear Window, Vertigo, Psycho and The Birds. But the extra-special good news is that Universal has remastered Psycho with a longer cut (for standalone Blu-ray as well). The announced release date is September 8.

Wa-ay back in 1998 I wrote a short article for the old DVD Savant that reported something that friend Douglas Haise had found hiding in plain sight. The famous Hitchock-Truffaut interview book documented the famous Janet Leigh Shower Scene shot by shot — and one frame grab showed a more revealing view that didn’t appear in the prints we saw (over and over and over…). My old article is still up — it’s called An Interesting Bit Of Info On The Censored PSYCHO Shower Scene.

A number of years ago we learned that foreign copies of Psycho had retained the shot, but I didn’t know that other short bits and scene extensions had been censored as well. The full set is documented in an excellent entry of the Movie-Censorship.com site. The text is amusing: of course Janet Leigh was never naked during the filming — her body double was!

Now, will the new version include just the extra shot or two from the pre-shower scene, or everything mentioned at the Movie-Censorship page?  I really need to see more seconds of Anthony Perkins with blood on his hands! 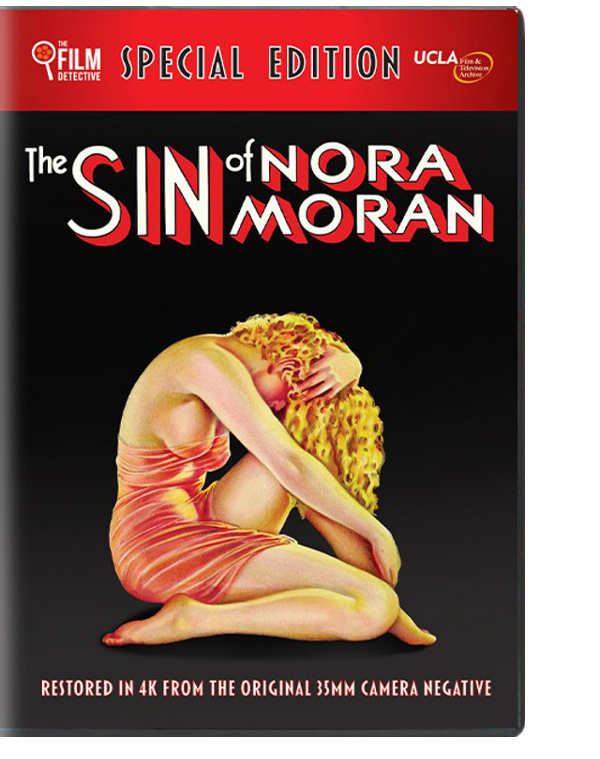 For the second announcement we step back thirty years or so to the marvelous days of pre-Code permissiveness. On July 29) the disc company The Film Detective will release a new Blu-ray of 1933’s The Sin of Nora Moran. A convicted murderer (Zita Johann) relates her story from the Death House. The show ‘utilizes flashbacks, dreams and hallucinations to tell her tale of fateful doom,’ all of which sounds peachy-keen to devotees of similar pre-Code sizzlers like Baby Face, The Story of Temple Drake and Safe In Hell. Zita Johann was the star of Karloff’s The Mummy and played opposite Edward G. Robinson in Howard Hawks’ Tiger Shark.

Most of us only know this ‘Majestic Pictures’ release from its racy original poster (pictured) which was painted by the famed Alberto Vargas. The Film Detective is holding a contest for a giveaway of a quality framed reproduction of the poster.

Another curious note — the disc will be released in collaboration with the UCLA Film and Television Archive, and also Sam Sherman and Independent-International Pictures. Does that mean that The Sin of Nora Moran shared vault shelf space with Al Adamson’s Blood of Ghastly Horror?