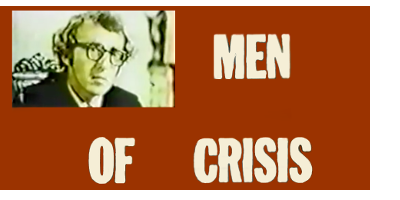 Author and critic Joseph McBride frequently posts sharp, provocative links on Facebook; just a few days ago he linked to this unscreened, censored 1971 satirical TV show called Men of Crisis: The Harvey Wallinger Story. In sort of a forerunner to Zelig, Woody Allen leverages the faux-documentary format of Take the Money and Run to lampoon, skewer, smear and all but expunge Richard Nixon. Narrator Reed Hadley lends the show his appropriate tone of smug self-importance; among the familiar faces aiding Allen are Diane Keaton and Louise Lasser. It’s a crime that we didn’t get to see this in college, when it would have been a hoot: it’s 100% gleefully sophomoric ambush jokes of the best kind.

Now for another slice of web-based radio-type programming — Dick Dinman returns with The WAC’s fearless leader George Feltenstein to talk about Two Impressive Warner Archive Releases. The backstory and restoration of the long version of Rachel and the Stranger is given their full attention, followed by a discussion of the new Blu-ray of the Robert Wise / Robert Mitchum western Blood on the Moon.

Helpful correspondent John Vincent clears up the ‘Zombie’ mystery raised by Jonathan Gluckman a few days ago. Here’s what John had to say:

“Hi Glen, the recording of Gene Kardos’ Zombie you linked to is a pull from a CD called Halloween Stomp which came out in the 1990s. The vocal “EEK!” at the end was lifted from a cartoon called Scrappy’s Ghost Story from 1935 produced by Columbia’s Mintz studio. Those forgotten and under-rated Mintz cartoons were not related to the Kardos 78. The CD maker also interpolated audio samples from the George Pal Puppetoon Jasper in a Jam between other supernaturally- themed jazz 78s. A lot of those have found their way to YouTube.

I’ve never heard another Kardos record like Zombie and have no idea why it was titled that way. The band often covered popular hits of the day: some good, some not so good. They do a particularly lively version of 42nd Street.

This 16mm print is probably the best version of Scrappy’s Ghost Story you’ll find online. Sony controls some beautiful 35mm materials on these that weirdos like me would love to see released some day. Still enjoying your page – just great stuff! — John Vincent

And thanks for reading — Glenn Erickson