John McElwee’s great Greenbriar Picture Shows column for February 27, 2020 has a subject no sci-fi fan could resist: John looks at the import double bills handed Hammer’s Quatermass Films, plus the Q-Thriller wanna-be X The Unknown. John’s distribution – exhibition mindset always points out things that never occurred to me: it seems that these English sci-fi films fared better or worse at U.S.A. box offices depending on what co-feature they were paired with. Quatermass 2 was one of the few Hammers to be doubled up with a non-horror or sci-fi feature, and accordingly did less well. Thanks John!

I’m getting very happy news that the U.K. concern Eureka / Masters of Cinema will be putting out a (hopefully gloriously restored) Blu-ray of the CineSavant must-see favorite The 1,0000 Eyes of Dr. Mabuse. The release date given is the 18th of May. For his final feature film, Fritz Lang revived the evil mastermind of his two silent classics and one early sound masterpiece … even though the diabolical Mabuse was technically killed off back in the silent epic.

Although the storyline slips in odd Edgar Wallace elements like a murderous seance, Lang pushes Mabuse’s ’empire of crime’ into the atomic age — with an existential, apocalyptic worldview. In vintage thrillers like his silent Spies, Lang had practically invented the playbook of the modern espionage/paranoia thriller. Rather than fall back on old ideas, 1,000 Eyes both invents and elaborates on the theme of total surveillance through closed circuit television. And Lang’s fearless, brilliant ‘James Bond’ undercover agent turns out not to be Peter Van Eyck’s handsome hero.

Can you tell that this is a special movie for CineSavant? MoC’s disc looks to have included David Kalat’s great old audio commentary (unless he recorded a new one). 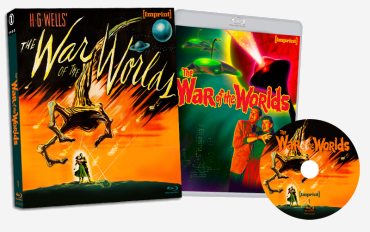 A great deal of discussion is afoot this week about a new Australian disc company called Viavision / Imprint. They’re advertising a string of Paramount-licensed titles that include two science fiction films not available on Blu-ray anywhere else, Gene Fowler Jr.’s I Married a Monster from Outer Space and George Pal’s The War of the Worlds. The classic, Oscar-winning invasion from space epic will reportedly be the new 4K restoration with the popular wire-removal revisions. The spec sheet mentions a new 5.1 mix plus original mono audio. The disc stats also call out the good extras from the 2005 DVD.

We don’t yet know what the discs’ status is re: region locking. Another bit of cold-water news is that the discs aren’t cheap, and there’s a sobering shipping fee to order them from down under. A close associate has ordered a WOTW disc anyway, so I might be able to review it in a few weeks.

The other titles in the first batch of five Imprint releases are Waterloo, The Duellists and Sorry, Wrong Number.

Closer to home, we’re also excited about Kino Classics’ upcoming Blu-ray of the restored 1920 The Golem: Wie en der Welt Kam. It’s a Murnau Stiftung restoration job that ought to be a revelatory experience … of all the silent German classics we saw at film school, The Golem looked the worst. The terrible, ratty prints must have been sourced from bad copies that were unsteady and mis-framed. But the movie itself was obviously beautifully designed and produced — the still photos published in fancy cinema books were works of art. The new disc is a follow-up on a U.K. Masters of Cinema release from last year. Kino says their version will carry an alternate U.S. version, a comparison feature, and a Tim Lucas commentary; its street date is April 14.

Gary Teetzel adds the information that a German disc of Paul Leni’s classic Waxworks (Das Wachsfiguren Kabinett) will arrive even sooner, on March 13.