After my admittedly enthusiastic review for Blue Underground’s Death Line last time, it wasn’t long before this email arrived — from the film’s director, Gary Sherman:

Thank you for that great review. It is very gratifying to have one’s work so completely understood. Again Thank You. Would like to correct one misconception. The tracking shot was originally done in one piece. Unfortunately, the negative of the one perfect take was damaged. This was long before we had CGI to fix things like that. So I had to work a little analog magic to remove the damaged frames. It didn’t really change the flow or content of the shot, just eliminated passing through one archway. You are the first to notice and the first to get an explanation. Bravo! — Gary (Sherman), June 15. 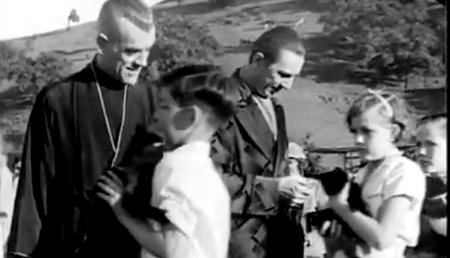 I’m pretty sure that it’s Gary Teetzel that tipped me off to this 45-second
‘Horror Pictures Collection’ film clip from 1934: taking a break from the set of The Black Cat, Boris Karloff and Bela Lugosi are in costume as they review children parading past with their pet cats, some of them black, for a Universal Newsreel. The kids look none too happy, but we can’t tell if the black-clad actors make them nervous, or the if the kitties are scratching them to ribbons. Or maybe the publicity gag is being filmed at that grim WW1 cemetery from the movie.

And an even briefer glimpse of Bela Lugosi is offered in the newsreel clip from the
California Pacific International Exposition from San Francisco. Bela appears at the 48-second mark, doing some hand-kissing with Marie Wilson, while Lee Tracy watches. I think my IDs are correct, so here’s your chance to show me up. (It figures… so far both Joe Dante and Craig Reardon identify the woman as Anita Louise not Marie Wilson. Time to go stare at some faces some more.)