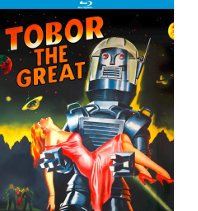 Some fun links tonight. Longtime correspondent ‘B’ sends along an amusing link to Thrillist Entertainment’s illustrated article The 100 Greatest Props in Movie History, and the Stories Behind Them, which has a lot of funky choices but is still an okay read. The Great Whatsis from Kiss Me Deadly is there, so I’m satisfied.

We were told he retired from audio commentaries, but perhaps this one was in the can from an earlier time: Kino says that Richard Harland Smith will be heard on the yak-track for their upcoming Blu-ray of Tobor the Great, which has been given a street date of September 12. The hero brat is the kid from Night of the Hunter!

Gary Teetzel forwards this syfywire link to The 23 Most Hilariously Wrong Genre Movie Closed Captions. I suspect that many of these are from Hong-Kong generated discs.

An excellent trailer-promo surfaced for about a day for Cohen’s promised Blu-ray of The Old Dark House, and then disappeared. The quality was phenomenal for a picture we’d only seen pretty grungy quality. A facebook post claimed that Cohen had leaked a release date, but being the Savant, I missed it. If the promo pops up again, check it out, it’s quite good.

And finally, judging by the online response, I ought to ditch this movie boosh-wah and call myself OLD MUSTANG CAR SAVANT. Thanks for all the notes and interest in a vehicle I had for many years, but never felt secure enough to invest in properly restoring. Now my daughter is finishing the job. Wotta gal!

I will now return to movie-brain mode, at least until the next time I get to visit my old car again.