Hello!  I’ve returned from a break. All kinds of time-consuming things loom ahead, but I’ll be back on the review warpath soon enough.

This is a book review, for Joseph McBride’s big new compendium of his writing for the past fifty years, Two Cheers for Hollywood: Joseph McBride on Movies. It was long ago that I first became aware of McBride, through his first book on John Ford. I also enjoyed the articles and reviews he brought to Daily Variety, at a time when its coverage stopped being pitched solely to exhibitors and became the most reliable review source around. Two Cheers is not a collection of reviews or learned essays but the full range of McBride’s journalistic work. Since the early 1970s McBride was being tapped as a key resource for film-related screenwriting and career recaps for famous directors; his interviews of the greats pretty much picked up where Peter Bogdanovich left off. 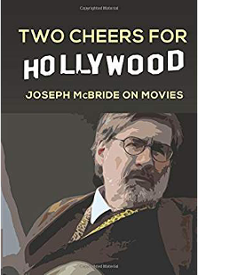 The book’s satisfying loose organization soon reveals a broad range of interests and subject matter. McBride begins with pieces about writers, giving his take on the Blacklist, and the controversy with Elia Kazan’s honorary Oscar. A very large section covers his extensive interviews and articles on directors, with more than one piece about John Ford, who was just as irascible with a fellow Irishman as he was with others. McBride doesn’t shy away from the politics of his subjects, acknowledging that his favorite actor John Wayne carried totally opposite political opinions. The articles never go for the obvious — he looks at George Stevens and François Truffaut, but also the partnership of Joe Dante and Steven Spielberg, and the man who directed the Three Stooges, Edward L. Bernds. McBride wrote an entire book on Frank Capra, but explains in articles reprinted here the distinction between Capra’s earlier work and his later problematic ‘important’ pictures. It’s refreshing to read someone willing to fully take down Capra, whose 1971 autobiography is mostly self-aggrandizing fiction. He also wades deep into the controversy of the Coen Bros.

McBride’s on- set visits reveal unseen personalities for famous actors we think we know, like James Stewart. He has a surprising interview-based piece on Stephin Fetchit, and another on Alma Reville. He even devotes a nice piece to designer Richard Sylbert, and takes time to examine Spielberg’s relationship with his editor.

The book is full of surprises. Each piece is preceded by new notes that describe why it was written, and in many cases, how editors removed bits of controversy here and there. Those sections have been replaced. An article in which McBride described the Bush administration as a ‘regime’ did get him into hot water with one publication. A piece on two movies about the Cuban Missile Crisis, and another on ‘George Orwell in the movies’ reveal more of McBride’s strong opinions on national politics — one of his books is about the Kennedy assassination. We read about McBride’s various efforts to bring suppressed pictures to light, like John Huston’s Let There Be Light and Orson Welles’ Too Much Johnson. He openly embraces John Ford & Leo McCarey’s most sentimental films. Yet McBride is entirely persuasive in his arguments — he devotes an entire chapter to Elia Kazan’s Wild River, which I want to go back and read again.

Joseph McBride has a way with his opinions, which are never taken lightly. When he gets rough with Frank Capra or Jean-Luc Godard, he doesn’t care where the fur flies. By just explaining the bizarre storyline of a film left unmade by Alfred Hitchcock, we get deeper into the director’s psychology than a dozen essays tossing around gossip about his mistreatment of Tippi Hedren. McBride is a journalist first. His writing invariably finds an interesting hook, and then goes beyond to uncover something meaningful.

It’s a big book, almost 700 pages. I know I’m going to be dipping into it again soon. It is always liberating to read the thoughts of people that communicate well. This copy already has six or seven provisional bookmarks. I don’t want to forget the exact words McBride uses to slam Lost Horizon.