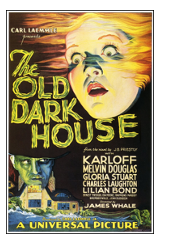 One review today — call it a vacation situation for the next few days, and perhaps updates rather than reviews. But I do have some fun links and announcements.

Gary Teetzel forwards Variety’s announcement that Cohen Media is bringing to Blu-ray a 4K disc of a restored version of James Whale’s The Old Dark House. The movie was once thought lost until the late 1960s, when none other than Curtis Harrington found it in a vault. It’s been in the Library of Congress all this time, while we’ve had to put up with some pretty unsubstantial releases. Universal is reportedly working with Cohen on this. Gee, Universal, I think you lost rights to Mamoulian’s Love Me Tonight, but maybe you can go to the L.O.C and find an uncut, uncensored version!

Gary also forwards a Movie-Censorship.com article comparing the two versions of Sidney Salkow’s The Last Man On Earth — the Italian cut has a scene extension but also trims a lot of shots. The site is illuminating even if it’s sometimes hard to read … does that 9 seconds mean shorter or longer. . . and which version?

And both Joe Dante and correspondent “B.” forwarded this article, Memories of a Real ‘Witch Hunt’ as a rebuff to a distortion of the term that became national news a couple of weeks ago. The author is Julie Garfield, the actress daughter of John Garfield.

And Joe Baltake’s opinion columns are fun this week, just because it’s good to read contrarian opinions backed up with good reasoning. His The Passionate Moviegoer has ‘Blasphemy!’– themed ‘Hall of the Overrated’ negative takes on Cabaret, Breakfast at Tiffany’s and Casablanca. Interesting.

The summer discs that cry out for good reviews are here — The Lost City of Z, The Valachi Papers, Where the Boys Are, The Sea Chase, Lost in America, Straw Dogs, Shag, Stalker, The Road to Bali, The Battle of the River Plate (German Region B), The Quiet American, Shalako, Pulse, Obsessions. I’m also hoping to review Scream Factory’s The Angry Red Planet and The Four Skulls of Jonathan Drake one way or another in the absence of screeners.

And finally, a major book review should be less than a week away — I’m almost finished but it needs work.