Wow, I’ve got little in the way of fabulous new links today, as I think my happy link providers are off hobnobbing with their fellow wizards and otherwise getting into trouble. And no ironic top image today, as I’m putting this one up completely straight, even though the source movie is a house slightly divided against itself, to mangle a phrase.

It’s pretty great getting this Blu-ray of one of my top favorite space films Ikarie XB 1. The secret to having a favorite picture become available on disc is apparently to be pessimistic and assume that it will never be released, that the disc Powers That Be out there have my number, and send anything I want to the back of the line. I guess I have to retire that attitude after this year. When I began ‘MGM Video Savant’ years ago I put out lists of coveted movies, and on top were a group of Fox ‘Scope movies that I’d seen only in miserable Pan-scan TV versions: House of Bamboo, Hell and High Water and Garden of Evil etc. What can I say? Now that I can peruse them in beautiful Blu-ray HD, is it time to die? I hope not. To mis-quote Yellow Submarine, newer and bluer blues are always on the way, and greedy collectors never get enough.

This Ikarie disc was a surprise. I saw the restoration trailer for the show a while back, and noted that Trailers from Hell’s Joe Dante received a prominent text endorsement quote. But only last night did I watch the trailer on the disc, and saw that there was a flurry of additional one-word quotes further on, with the last one being ME. The important, unique word they pulled from my old review is ‘Best,’ which is spelled out in bold Czech: “NEJLEPŠÍ.” Of course, my name is only up for about 12 frames! And it’s misspelled!   I don’t care. I’ve got my names on a bunch of noir and Mario Bava releases, with mostly inane quotes, but this feels special.

Just so you don’t think all is perfect here in Los Angeles, starting a few days before the 4th of July we hear fireworks every night. When the booms really echo, we wonder if hostilities have broken out with Orange County. Three days ago we got a shower of ash from the hills burning to the Northeast. And last night we had a helicopter buzzing around the neighborhood for about an hour, searching for Public Enemy numbers one through four. Look how thoughtful I am — I got this picture for you of a Cop copter with its searchlight. Couldn’t do much else, with the chopper doing everything but playing Ride of the Valkyries. 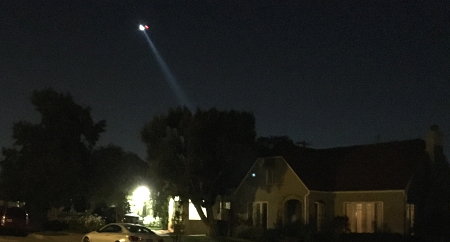 Thanks for reading! Have a great fourth! — Glenn Erickson

More recent Savant Columns below on page 2 … and beyond.