Altair Four’s eclipse was good, but there’s nothing like witnessing the real thing. Yes, Monday’s solar eclipse was fun to watch — a glimpse of the sun’s orb was partly blocked here in Los Angeles, and we saw a lot of viewers become either elated or disappointed in the various network coverage. The experience of darkness at noon is pretty strange; I remember an overcast feel for some eclipse witnessed in my past, but never real darkness such as we saw on TV.

My joke is that, if some uncomprehending person got the time confused and ran out to see the eclipse at 11:30 last night, they might say, “Wow, it really IS an eclipse — it’s pitch black out here.” That’s a spin on the old joke about alien invaders: How did they get through the Solar System without being detected? — They snuck in after darkness.

Every picture tells a story. A colleague of my wife ran out to get some eclipse glasses yesterday, and bought an extra pair ‘just in case.’ They proved to be useful, as demonstrated by the family dog, Riley. I think Riley has the appropriate attitude for a special day. 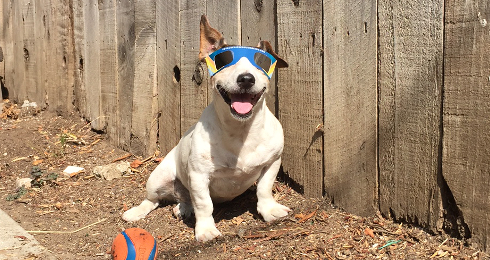 Reviews coming next: ClassicFlix’s The Noose Hangs High with Abbott and Costello, Twilight Time’s Kid Galahad with Elvis, directed by Phil Karlson; and Kelly Reichart’s Certain Women from Criterion. Langushing on Charlie Largent’s to-review plate are Visit to a Small Planet, Everything You Always Wanted to Know about Sex but Were Afraid to Ask, La Poison, They Shoot Horses Don’t They and Suddenly, Last Summer