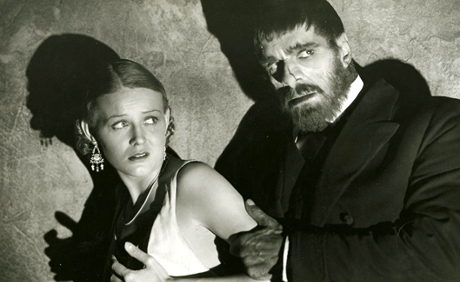 The Cohen Collection’s new Blu-ray of the long-missed The Old Dark House now has a street date, October 24. Gary Teetzel found the blurb on a Barnes and Noble page. I’m already thinking about a nice po-ta-to. They dropped the video promo from YouTube, the one that made the famous James Whale horror show look better than new.

And just in: Kino has announced that its new Avanti! disc will have new interviews with actors Juliet Mills and Clive Revill!

Here’s one for the ‘it isn’t always me’ department. Craig Reardon pointed out that in the review of Duel in the Sun, I had written ‘Joseph Cotton’ numerous times instead of ‘Joseph Cotten.’ It’s one of the various spell-check programs that changes what I write as I write it, ‘correcting’ me. So just remember when you read my error-ridden texts, I’m not (quite) as incompetent as I seem. Or, now that I’ve established plausible deniability, I can behave as if I never make mistakes. Win-win. 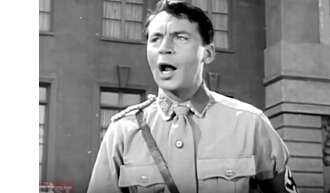 Civic wisdom and political sanity are in short supply these days, so here’s a genuine boost for your morale. Joe Dante is circulating this link to the short subject Don’t Be a Sucker!, which Joe reports was at one time edited into his epochal comedy marathon The Movie Orgy. Done in the earnest style of an educational picture, it’s an anti-fascist film, a scary, patriotic 17 minutes with excellent work from Paul Lukas, Felix Bressart, Kurt Kreuger, Richard Lane, George E. Stone, Ivan Triesault and everyone’s favorite Nazi swine impersonator, Martin Kosleck (right). As a news report on the nature of Fascist slime, it’s highly pertinent today, and who better to teach us basic American values than our favorite character actors from the 1940s?

Produced by the Army, the short subject is dated 1947, but some of its content indicates that it is a slight revision of the 1943 original listed in the IMDB.