I’ve been reading a bit, thanks to some helpful links. I enjoyed Nick Pinkerton’s Film Comment interview with Mario Adorf, especially what the German actor has to say about Sam Peckinpah and Major Dundee, where he played Sgt. Gomez, a Mexican cavalryman. The joke on that movie set was that Adorf made a more convincing Mexican than did the real Mexicans.

Valued correspondent ‘B’ has sent me an interesting book that I just finished, Hollywood Divided: The 1950 Screen Directors Guild Meeting and the Impact of the Blacklist by Kevin Brianton. It’s a fascinating research summary on the famous Directors’ Guild meeting in 1950, where, legend has it, John Ford led a rebellion against Cecil B. DeMille’s underhanded campaign to toss Guild president Joseph Mankiewicz and institute a loyalty oath, one that would spread to other guilds and take over Hollywood. According to author Brianton, everything we know about this episode is wrong, taken from 1970s accounts either embellished or mis-remembered. DeMille was trying to jam the Mankiewicz recall through, but there’s no direct evidence that he mispronounced the names of foreign-born directors at the meeting to make them seem un-American. Mankiewicz was never against a loyalty oath as long as it was voluntary. And John Ford defended DeMille as much as he criticized him. Not only that, but Ford’s famed introductory line, “My name is John Ford. I make Westerns” is not an accurate quote! The most fascinating thing about the book is reading what scores of well known directors had to say at the six-hour meeting, and on which side of the fence they stood. According to Brianton, my late friend Robert S. Birchard in his bio Cecil B. DeMille’s Hollywood, was one of the first historians to correct the ledger as concerns DeMille. The great filmmaker was still a super-patriot who informed for years on the industry to the F.B.I., but he wasn’t as dark a villain as painted by other accounts. 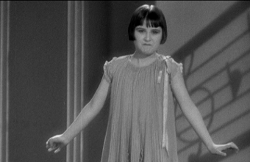 Gary Teetzel checks in with a video of comedienne Rose Marie taped at a screening last week at the Aero of a new documentary on her life and career, Wait for Your Laugh. Gary reports:

“At one point during the audience Q & A, someone asked Rose Marie if she dated anyone after the death of her husband. She said she had gone out a few times, and then shared an anecdote about her fellow Hollywood Square contestant who happens to be one of our favorite horror stars . . . how often do we get to hear a new prime-source story about Vincent Price?”

The photo is of Rose Marie in Paramount’s International House, a pre-code picture . . . made eighty-four years ago.