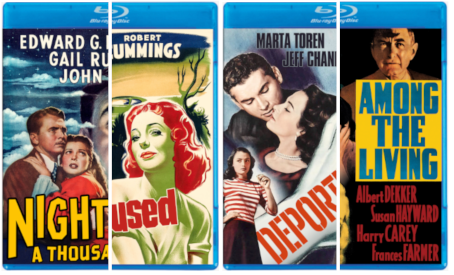 Let’s shout our approval for this foursome of vintage noirs, all of which have been scarce since Eddie Muller was old enough to rob candy stores. Three Paramounts and one Universal give us four notable directors and a gallery of attractive stars, including a swoon-worthy array of actresses: Marta Toren, Loretta Young, Susan Hayward, Gail Russell, Frances Farmer and Marina Berti. The selection includes one of the key ‘just prior to the official style’ titles, a thriller with supernatural overtones, a ‘woman in jeopardy’ story and a gangster tale reportedly inspired by Lucky Luciano: Among the Living, Night Has a Thousand Eyes, The Accused and Deported. On Blu-ray from KL Studio Classics.
11/27/21