Correspondent John Vincent, in correcting a mistake I made about the Max Fleischer animation studio mentioned in last Tuesday’s column, also tipped me off to his website / blog Uncle John’s Crazy Town. The page is a pretty amusing ongoing ode to animation in general. John’s latest entry is about a short series of pictures called Fleischer’s Animated Antics. They look familiar — I’m not sure whether or not I’ve seen them.

A Book Review: Tom Weaver has a new book out in his Bear Manor ‘Scripts from the Crypt’ series, an informative dive into Boris Karloff worship called Boris Karloff’s The Veil. Definitely an item for focused fans on the greatest of all horror stars – and there are plenty of them out there — The Veil digs into a heretofore underreported episode in the Mr. K’s career – his late ’50s years hosting spooky TV shows, while moonlighting as a change-of-pace special guest on TV variety shows, like that of Dinah Shore. Karloff fans that think they know everything about their hero may receive something of a shock, as the book uncovers a TV show called The Veil. Ten episodes were produced in 1958, but when the fabled Hal Roach studio went belly-up they were consigned to the vault and never aired.

Weaver’s book series to some degree follows a research ‘n’ scrapbook format grouped around reprints of some key scripts from the ill-fated series. Much in the book’s favor is the sheer unfamiliarity of the subject, here illuminated by a lifetime of research. Weaver’s key essay has sufficient data to tell the story of the series in great detail, with little or no guesswork. Each of the episodes is explained in full detail, with mini-bios for the actors involved. When Weaver showed ‘rescued’ episodes to one of the show’s directors, he couldn’t remember working on it! For other angles Weaver relies on specialized essays. Barbara Bibas Montero’s piece covers the career of her father, the show’s producer. Martin Varno (yes, THE Martin Varno, the legendary screenwriter of Night of the Blood Beast) offers a glimpse of what working life was like on the Roach lot, a huge Culver City studio crumbling in disrepair, and soon to fall into receivership. 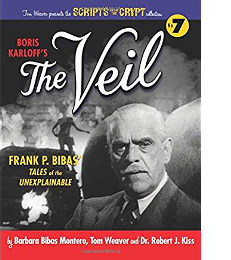 The book’s multiple perspectives are good, too. Weaver presents a well-documented account of the studio’s demise as reported in the trade papers. Hal Roach Jr. announced dozens of upcoming shows, just days before the whole studio went before the auction block. That’s followed up by an excellent overview of fantasy-horror TV production in the late ’50s by Dr. Robert J. Kiss. The takeaway info is that The Veil would at best have shaped up as a weak sister to its genre competition One Step Beyond, and Karloff’s later hit show Thriller. And we even hear the story of how the original film material was rescued from oblivion, by the late proprietor of the Something Weird video label, Mike Vraney.

Tom Weaver can be highly critical of genre pictures that don’t meet his personal criteria, and his writing refuses to sugarcoat The Veil. Despite some good playing, he finds that most of the episodes are weak both in story and execution, with Boris Karloff’s recurring roles only infrequently giving him a diverting character to play. Weaver is surprisingly hard on Karloff, for seemingly taking any job that came along and even for being a pinchpenny. To me it’s entirely understandable if the old gent just put on his gracious act for P.R. purposes. Before stardom came he’d led as brutal a life as a ‘wandering actor’ could, working in unreliable stage companies out in Canada and the northwest. He’d long ago discovered that he could work simultaneously on Broadway and in junk movies, without a deleterious effect on his career. True, the series doesn’t sound like much of a keeper, but the detail is absorbing. Was Karloff required to provide some of his own costumes? Weaver marvels at the fact that he always wears the same tie, not only in the spooky episode intros, but also when in character in some of the shows.

Boris Karloff’s The Veil concludes with some extra scripts, some interesting photos and collector errata such as an appendix on a grim double murder committed by the actor’s niece back in England. Everything is thoroughly indexed and annotated, making this a serious reference book as well, not just a compendium of fan fluff or (cough) reviewer opinion. Weaver always manages to make interesting reading of what the mainstream might consider some pretty minor ’50s horror efforts. This particular subject may sound less essential than others, but the book’s peek into the realities of ’50s horror TV production is often illuminating.

I may be a little late with next Tuesday’s reviews — it’s a family weekend and if I go near a TV monitor it will be for pleasure.