I identify, at these timings, the following less- iconic places: I think the cameraman thought this was a studio, but I don’t think it is (1:03); Warner Bros in Burbank (I’m pretty sure, 1:08); An old Fox lot on Western just South of Sunset, which later became the Deluxe lab (1:25); Looking West down Hollywood Blvd from Gower (my Toyota dealership is in the foreground on the cut, 2:01); 20th Fox, moving from Pico Blvd North, showing the ‘Hello Dolly’ street set (3:50, and pictured above) — at (4:30) the view crosses Olympic Blvd going North to more studio property (including a movie airplane) on land that is now residential streets just West of Century City; MGM looking Northwest across Culver Blvd (5:04); The MGM back lot (I’m pretty sure, 5.18). 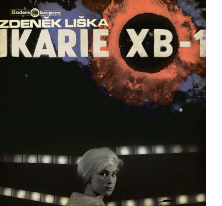 Correspondent and advisor Gary Teetzel turns my attention to something I should resist but might not be able to — the soundtrack to the science fiction film Ikarie XB 1. The Zdenek Liska score is coming out from a label called Finders Keepers Records. A price is listed but no release date, which at least gives me time to forget about it before I spend my money. A ‘Tracklist and Soundclips’ link takes us to a couple of samples, but none of the track names given suggest that the film’s memorable ‘space dance number’ is on the disc. It’s so distinctive, it might have been composed by somebody else.

I’ve been pretty good at avoiding direct political jabs lately, but this one was too good to pass up. Remember the 2012 Finnish sci-fi black comedy Iron Sky, the strident anti-Neocon tale about surviving Nazis re-invading Earth from a base on the dark side of the moon?   An even more politically caustic sequel is on the way, and to promote it the finicky Finnish filmmakers have put together a special trailer that’s so biased, it almost isn’t funny: Iron Sky The Coming Race trailer. How dare the Finns lampoon American politics, you say? As foreigners are the ones that keep having to bear the burden of our ‘interesting’ foreign policies, I think they should be able to protest as much as they want.

And Kino Lorber has detailed its February releases, which include the dippy psychedelic western Zacariah, Walter Matthau in the Jack Lemmon- directed Kotch, Cliff Robertson & Claire Bloom in an adaptation of Flowers for Algernon, Charly; Sidney Lumet’s sorority-of-vipers epic The Group, Burt Lancaster in The Midnight Man, Burt Lancaster in the Technicolor film noir Desert Fury (just above); John Farrow’s 1940 A Bill of Divorcement and Terence Young’s obscure but curious pirate picture with Anthony Quinn, The Rover.