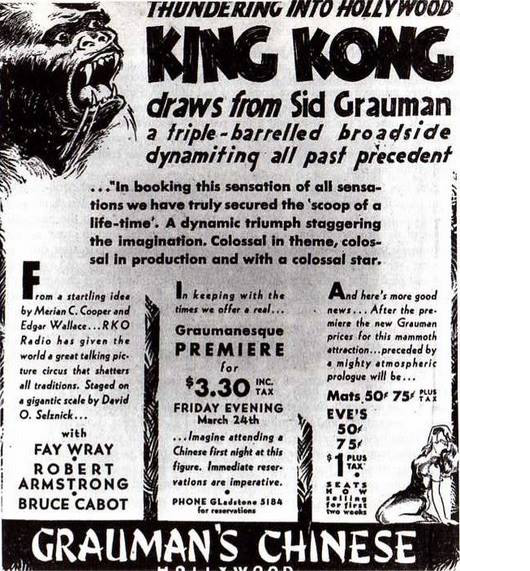 The holidays are wrapping up, and even if you’re adversely affected by the partial government shutdown, you may feel lucky simply to have survived 2018.

With a bit more time on my hands, I’m gearing up for more reviews than normal in January: I’ll be playing catchup with some December titles as well.

Wanna go to a premiere? I believe that Steve Finkelstein rounded up this 1933 newspaper ad from theater owner Sid Grauman, who apparently wanted to make sure the grand opening of a certain blockbuster didn’t play to an empty house. Three dollars and thirty cents doesn’t sound like much, but it did if you were making $35 a week. I understand that, in addition to the movie and a lavish prologue stage show, RKO erected a full-sized bust of Kong in the forecourt of the Chinese Theater.

A nod to a pair of good review sites: ‘Vienna’ over at Vienna’s Classic Hollywood dropped me a friendly, flattering line today; I checked out her page again, and also moved on to Laura’s Miscellaneous Musings — both feature reviews and opinions from interesting viewpoints (in other words, with thoughts I hadn’t considered).

Thanks for reading, thanks as ever, and Happy New Year ! — Glenn Erickson