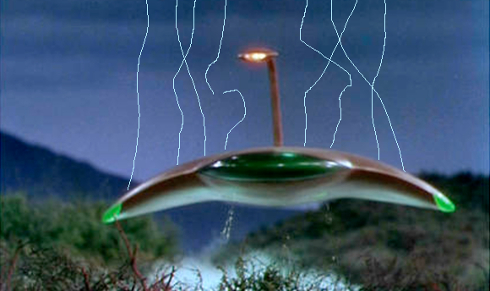 Following up on Saturday’s CineSavant Column announcement of a new restoration of George Pal’s 1953 The War of the Worlds, I prevailed upon The Reel Thing attendee and sometime- Savant correspondent Michael Schlesinger to shoot me a report on the screening. And just like the gent Mike is, he did just that. Here’s what the producer of The Misadventures of Biffle and Shooster sent back, by secret messenger:

Glenn: The restoration of The War of the Worlds looks and sounds terrific, with vivid color and brisk sound. They did remove wires, on the belief that George Pal & Co. would not have wanted them to be seen.

(One thing they did overlook in their presentation is that back then, projectors used carbon arcs, which emit a pure white light, so the lighting was calibrated for that. Modern projectors use quartz or halogen bulbs–and lasers now–which have less than white light, rendering the wires visible. This is why, in the old days, when a B&W film was shown, the image might go from greenish to brownish at the reel changes, because the bulbs were different from each other.)

The telephone wires at the crashes have been left in, however, for obvious reasons. Some matte lines are still visible and couldn’t be fixed, but that’s not a reason to quibble. The sound remains mostly mono, but sound effects are frequently panned to the side speakers with impressive results. And it was shown at the correct 1.37 aspect ratio. All in all, a profound success.

By the way, the opening night The Reel Thing film was the new 4K restoration of Billy Wilder’s The Apartment, which meant that there were TWO Jack Kruschen movies shown at the Academy Vine Street this weekend! — Mike

All that sounds okay to me — I certainly won’t miss the wires. I’ve heard multiple reasons why they’ve seemed so visible in video presentations, the most amusing being that the original Technicolor process ‘softened’ the image so that little things like wires weren’t as visible. Well, we always saw the wires and really didn’t care — at age 12 in a 1964 reissue I was so keyed-up and on the edge of my seat that it didn’t matter.

I’ve been told that when Ray Harryhausen was informed that the aerial brace wires holding up the Harpies in Jason and the Argonauts suddenly became visible on an HD scan, he immediately agreed that the wires should be removed if possible. We’ve heard no outcry after WB cleaned up various wires supporting flying monkeys, etc. in The Wizard of Oz. On the other hand, fans have roundly condemned a special effects re-do job on Hammer’s The Devil Rides Out; and a now- roundly condemned CGI revision on a DVD of Robert Wise’s Star Trek: The Motion Picture will likely never be seen again.

I’m as guilty as anyone about performing ‘dream revisions.’ Were the studio vaults my personal toy box, I’d probably be lobbying for a version of The Incredible Shrinking Man that gives Robert Scott Carey little shadows when he’s matted into shots. I’d re-run every effect in Gorgo to fix mattes, replace awful paintings and to paint-in extra explosion effects. I’m excited about the new 3-D release of Revenge of the Creature, and keep wishing that Blu-ray 3-D had not been suppressed in the U.S.. I wish it became so popular that Universal would send out the final, flat Creature movie, The Creature Walks Among Us, for a 3-D conversion. With the boom gone bust (only because they dropped the 3-D feature from domestic monitors) there must be more than one company out there willing to do the work at bargain rates. Ah well, when Walks Among Us plays, I’ll just close one eye and pretend. That trick works perfectly with Invaders from Mars, a flat picture that looks more 3-D than most real 3-D movies.

It’s great that Paramount has restored The War of the Worlds, which should be considered one of that studio’s historic milestone pictures. They’re apparently going to take it along to a few screening series — helpful correspondent Marshall Crawford informed me about this one. We can only hope that it also is given a new Blu-ray release. Their fancy restorations of White Christmas and especially The Ten Commandments make those films highly re-watchable. The process by which they remastered the DeMille movie ‘fixed’ plenty of annoying matte lines — if they couldn’t remove them they made them a less-annoying black, instead of blue. I’m hoping the same thing can happen with War. I also hope that they continue with a restoration of When Worlds Collide — which also won for best Special Effects, plus was nominated for Best Cinematography.

As if vintage ’50s sci-fi wasn’t enough, we’ve been tipped off by Tim Lucas that a German Blu-ray disc of Mario Bava’s dazzling mythical epic Hercules in the Haunted World is on its way, sooner than later. I haven’t details on Regions, but Tim vouchsafes that it will at least carry English-friendly subtitle choices. Plus Tim is involved with the extras. This is the one Bava-directed film I saw as a kid in a theater; it’ll be great if the color reproduces the experience. Great stuff! But wait, there’s more. We also have a bit of additional information about the upcoming Olive Signature edition of Don Siegel’s Invasion of the Body Snatchers — the release date is October 16. We have no word yet about extras, which at the moment prompts some residual conjecture — some desirable items were produced for earlier unreleased discs, and have yet been seen.

There’s a never-released Kevin McCarthy-Dana Wynter-Joe Dante commentary, and also a now-legendary in-depth docu produced for the title upwards of 14 years ago, but also not seen. A third possible item is a couple of minutes of beautiful color home movies of the shoot on the streets of Sierra Madre in 1955; I remember a very clear shot of a prop man carrying a green seed pod across a street. Those were on YouTube for a few weeks, way back when.

Olive’s Signature extras so far have mostly been interview lectures from film academics. When the possibility of a special edition came up last year, I was only one of several people who contacted Olive, so the effort was certainly made. We’ll have to see what they come up with.

A note on goofy subtitles

This isn’t as serious. It once was that the most entertaining, if perplexing, subtitles were on discs mastered in Southeast Asia — just trying to decipher them was an exercise in twisted language logic. An old DVD of Von Trier’s The Kingdom made movie viewing a fun code-breaking exercise.

Just as I’m willing to bet that some Home Video companies sometimes farm out the writing of disc box text to whatever illiterate office assistant isn’t working a 70-hour week, many of today’s subtitle transcriptions make us scratch our heads as well. This happens especially when older films reference well-known names, places and concepts unknown to today’s 20-somethings. Gary Teetzel and I trade such observances, but don’t write them down as often as we should. Gary just sent me his first thoughts on a horror picture I haven’t seen that’s just out on Blu-ray, 1969’s Eye of the Cat:

Glenn: There’s a scene in the film where Michael Sarrazin and Gayle Hunnicutt go to a party with a bunch of hippies–or rather, Hollywood’s idea of what hippies were like. As the camera surveys the scene, we overhear lame one-liners from the party goers. One woman says “FRENCH FILM ACTORS HAVE GONE FROM MARIENBAD TO WORSE!” The subtitles turn this into “FRENCH FILM ACTORS HAVE GONE FROM MERRY AND BAD TO WORSE.” I guess no one at the company is a Resnais fan; we better send (an Alain Resnais fan we know) over there to straighten them out. — Gary

Perhaps we should be compiling more of these subtitle anomalies…