I think the word has been leaking out for weeks, but we’re told that Powerhouse Indicator will shortly be announcing a Region A compatible Blu-ray of Jacques Tourneur’s incomparable Night of / Curse of The Demon. We Region B- equipped viewers love the encoding on the French disc from a while back, but there’s always the carrot of PH’s thorough extras. Gary Teetzel sent along not one but two links to YouTube radio shows of M.R. James’ source story Casting the Runes: 1947 ESCAPE with John McIntire as Edward Dunning and William Conrad as Karswell, and Michael Hordern’s classic read. 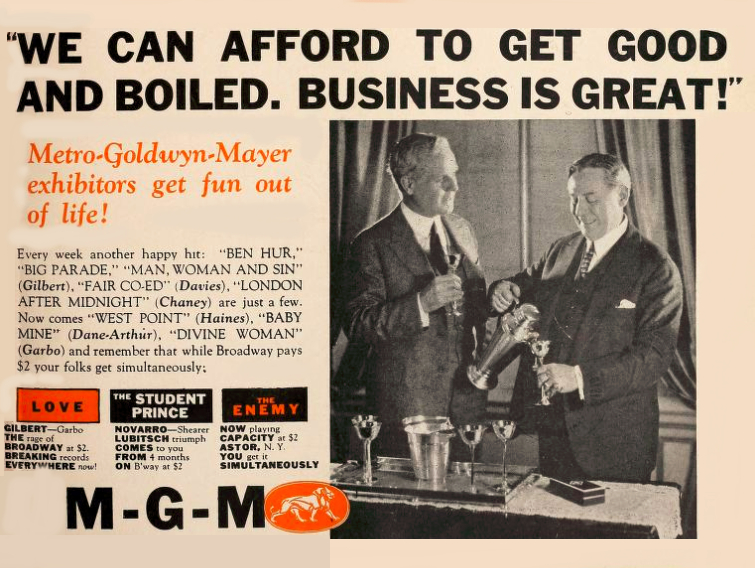 Gary Teetzel’s rummaging in the pulp trades of the past uncovered this odd 1928 company ad for MGM, addressing exhibitors, Note that it actually declares that, with MGM movies playing in your theaters, you’ll be able to get good and drunk. Pretty impressive considering that prohibition was then the law of the land; I guess they weren’t lying when they said that nobody took that Constitutional Amendment seriously.

I’ve been getting lively responses on my review for The Stranglers of Bombay and my photo article about a special effect in Kronos; even some of my web colleagues sent along a few nice words about them.

Right now I’ve got my nose jammed in the mail slot waiting for a UK disc of Kevin Brownlow’s It Happened Here to show up. So it isn’t due for another week … we don’t let details like that dampen the enthusiasm.

Although we’re not doing anything spectacular this year, I’m really enjoying our Summer in Los Angeles — no stress, etc., and fun on the side with a couple of visits from relatives. My daughter and I share a ‘thing’ for the Kaiju monster Mothra, in that I took her to a screening when she was four, and drew her a comic book version as preparation for the outing. She lately found herself a ritzy Mothra toy, and just yesterday sent me an (I suspect) pricey Godzilla toy, just for the fun of it. There’s no way to put a bad face on that — maybe I can even make Big G expert Gary Teetzel envious!