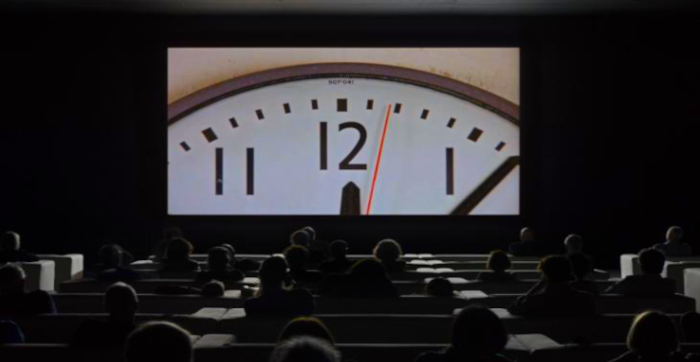 I received a number of notes about my inclusion of a note about Christian Marclay’s art installation The Clock at the end of my review for Vincente Minnelli’s The Clock. It’s the 24-hour video that keeps time with real time, and synchronizes hundreds (thousands?) of movie clips that show characters looking at or referring to, real clocks.

As a thoughtful follow-up, CineSavant correspondent Steve Wilkinson sent along a link to an unattributed crowdsourced “ClockClock” web page, which spells out the busy 24-hour schedule of realtime metadata for Christian Marclay’s The Clock.

I guess the list could be called a spoiler, although some of the contributors don’t know the titles of each show they list in their time-stamped entries. Minnelli’s The Clock doesn’t seem to be there. But I thought the list worth a good scan. Marclay’s work reportedly needs to be seen in person to understand its charm — the important difference is the way he edits the clips together to make them seem one giant unending movie experience. 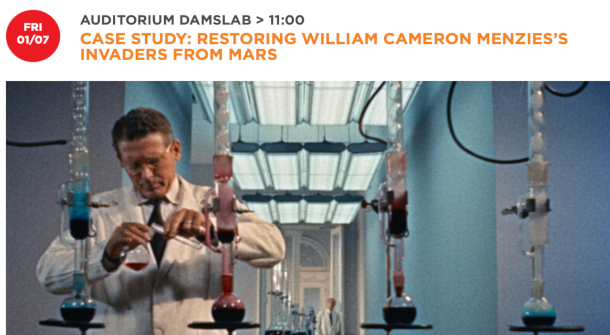 What, you haven’t already jetted off to Bologna, Italy for the Il Cinema Ritrovato film festival?  It’s the next opportunity to see the new Ignite restoration of the classic sci-fi Invaders from Mars.

I’m sad to say that I’ll be attending personally only in my alternate-dimension jet-setting fantasy life. I’m told that the Italians really do film festivals right. I would like to see this again in a theater some day, after the Great Plague passes.  Seriously, no movies or festivals for Glenn ’til the Bronze Sphinx sounds the All-Clear.

I was able to talk with Mr. MacQueen a few weeks back, and will continue to trawl for any and all bits of news about the upcoming Invaders disc release. It’s a pretty bold move for the startup disc company Ignite, simultaneously releasing in three formats. MacQueen’s involvement pretty much erases worries about the restoration quality. The project seems an all-star effort from the Gee Whiz Get-Go.

We got a really gratifying response to last Tuesday’s Raiders of the Lost Ark 4K review, which is good because I have a habit of alienating fans when reviewing really popular pix. Correspondent “B” reminded us last weekend that an acknowledged prime influence on the Lucas – Spielberg blockbuster was not an old movie serial, but a story by the comic book genius Carl Barks.

A 1954 Uncle Scrooge comic book story called The Seven Cities of Cebola sets Scrooge, Donald and his nephews on a search for a fabled treasure in the American Southwest, a desert Odyssey that incorporates a number of realistic details. They’re pursued by those scurvy Beagle Boys, who else?  You know, I’ve yet to see a single piece of serious legislation to curb the terrorist Beagle Boy cult.

Sure enough, the final comic panels take place in an enormous cavern with the fabled seven cities, and a very familiar booby trap to trip up would-be treasure raiders. Scrooge spells out the trap’s domino effect in the panels above. Before we see that, one of the nephews points out a mechanical shaft connected to the priceless idol, which will set loose the giant ‘pinball’ suspended high above. It’s a pretty good gag, we have to admit.