Oops … just as I was linking to a YouTube encoding of Edgar G. Ulmer’s Journey Beneath the Desert on Saturday, some (righteous) rights holder took it down … but do not despair. As a consolation prize, correspondent Jonathan Gluckman forwards another YouTube video, a single scene from the movie, albeit in not quite its full Technirama width:  Antinea, l’amante della città sepolta.

But you do get to see Jean-Louis Trintignant, Haya Harareet, Gian-Maria Volontè, Amedeo Nazzari and Giulia Rubini — and one of Edgar Ulmer’s impressive sets. The Carlo Rustichelli music is good, too.

We Wanna Go to the Mayfair and the RKO Palace!

And now, a little detour to discuss an NYC Times Square picture palace, just because it came up while reviewing Conquest of Space last Saturday. Being a California boy who visited Times Square just once in 1998, I had no idea that several of the iconic giant movie palaces we see in photos were once right there in the center of everything. I assume that some later became legit houses?

Correspondent and advisor “B” explained that

. . . the RKO Palace is absolutely in Times Square; it basically faces it, at 1564 Broadway (Seventh Avenue side) between 46th and 47th Street. If you were in the area in ’98, you may recall seeing the marquee for the Broadway production of Disney’s Beauty and the Beast — it was playing at the Palace. The theatre has been undergoing extensive renovation for the past few years. The hotel next door is being expanded (and will now extend to a high-rise area above the theatre) and the theatre itself is being raised thirty feet. But the place will still be there, thankfully. 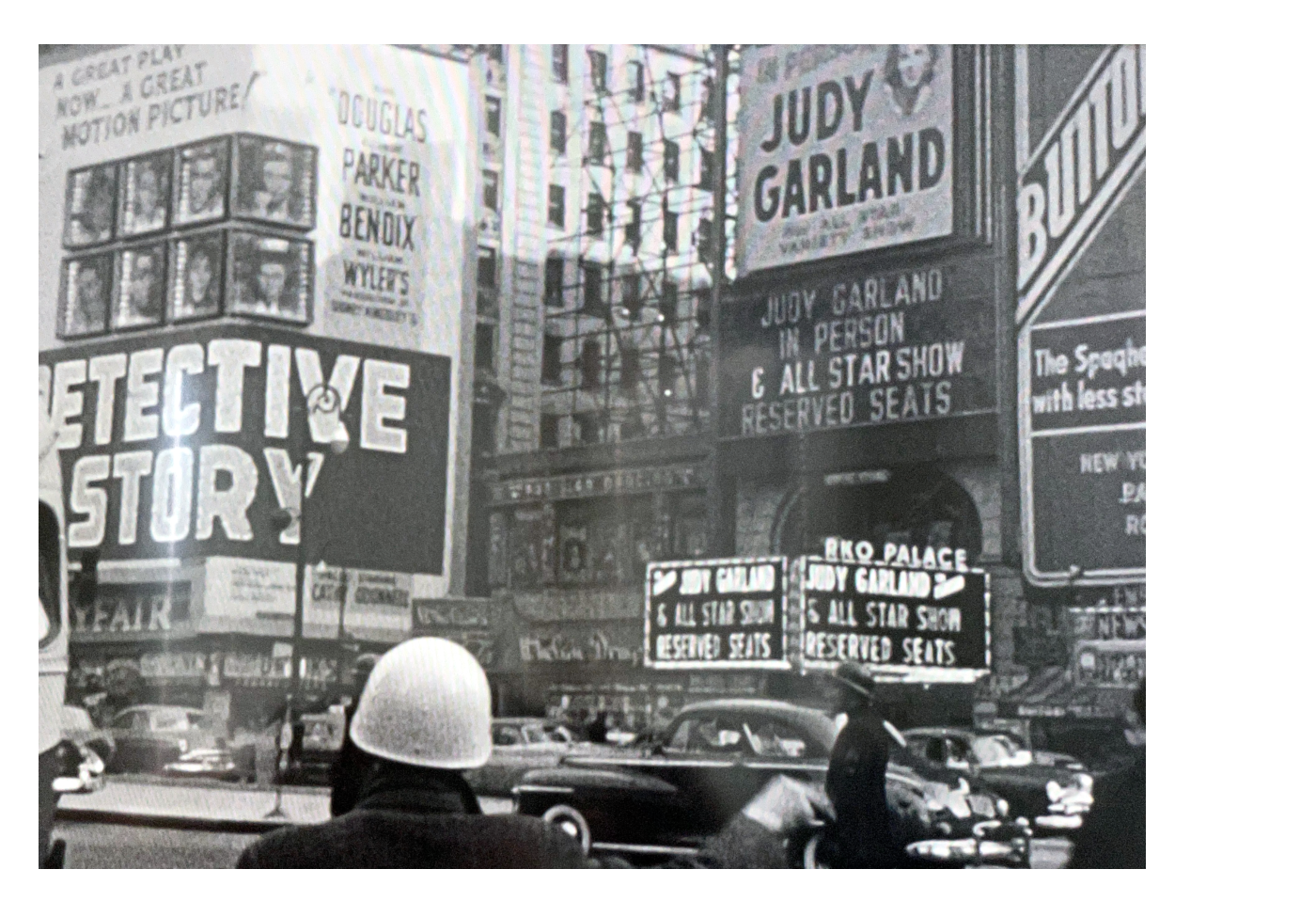 The position of the Palace made it a frequent ‘supporting star’ in movie scenes that show Times Square. It’s just to the right of the Mayfair Theater, the movie house with the giant billboard that reaches up eight or nine stories.  ←  Here in a screen shot from The Beast from 20,000 Fathoms, Judy Garland is appearing at the Palace, performing live. The marquee often advertises, “8 Vaudeville Acts.”  I have no idea how long the average vaudeville act was, but that can’t have left much room for a second feature. (All images enlarge zoomed or in new window.)

Yup, that’s the Palace back in the day. If you look at the pan of the Broadway area near the beginning of George Stevens’ Something to Live For, you can see a similar marquee set-up for the Palace… eight vaudeville acts, with Samuel Fuller’s The Baron of Arizona as the screen attraction. Gun Crazy played there in the late summer of 1950.

This appears to be the actual ad to go with the image just below. The Hilton Sisters — yes, from Tod Browning’s Freaks! get more attention than Joseph H. Lewis’s Gun Crazy: 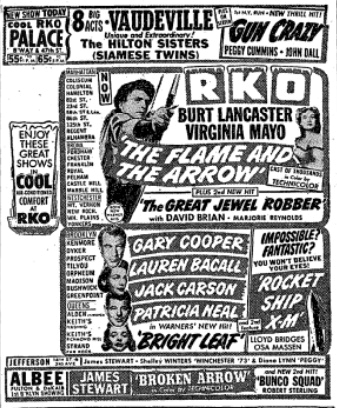 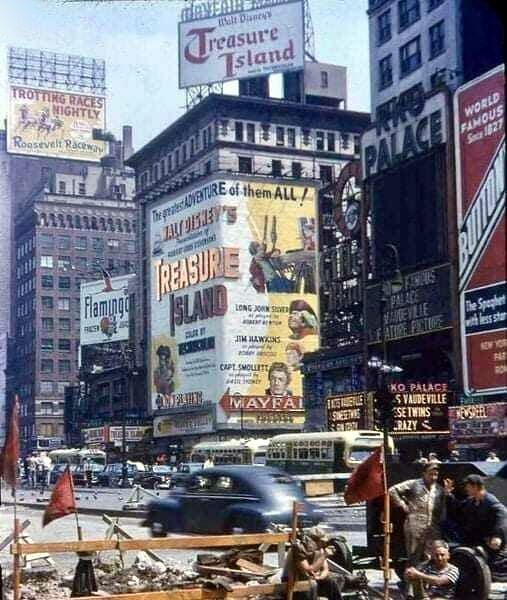 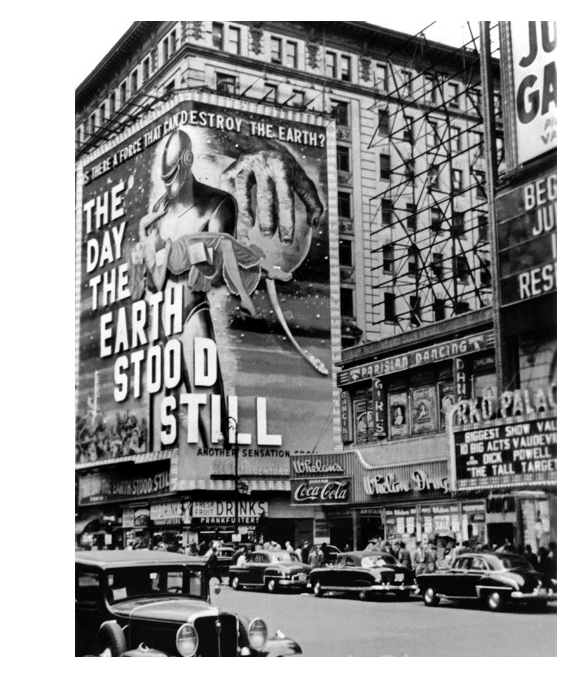 The 1,700 seat Palace opened in 1913 as a vaudeville house, and quickly became the most well-known such venue in the United States. It began primarily showing movies in 1932 and would often show pictures in conjunction with vaudeville acts; in the latter ‘thirties, it became strictly a picture house for some years. In 1949, the theatre reinstituted its movie/vaudeville policy and continued with it into the mid-’50s. Occasionally during this period the Palace would house ambitious one-person shows — Judy Garland’s famous early ’50s comeback sold out the place for three or four months, and Danny Kaye and Jerry Lewis each had several very successful solo runs at the theatre in the ’60s.

After the mid-’50s the house was sometimes a roadshow house (Bridge on the River Kwai, The Roots of Heaven, The Diary of Anne Frank) and more frequently a first-run venue — The Birds was a smash at the Palace). In 1966, the Nederlanders began to convert the Palace into a legit house (Sweet Charity was a big hit there); it continued to show movies from time to time until 1970, when it permanently became an important B’way theatre. [We saw La Cage Aux Folles there in ’84.]

As the photo proves, the Palace also booked Invaders from Mars two years before Conquest of Space; I have a hard time imagining seeing Invaders with 1600 other people and then sitting through stage acts. The experts say that Conquest did not do well at the box office, but its initial run doesn’t seem to have been too shabby, as shown by “B”s research. 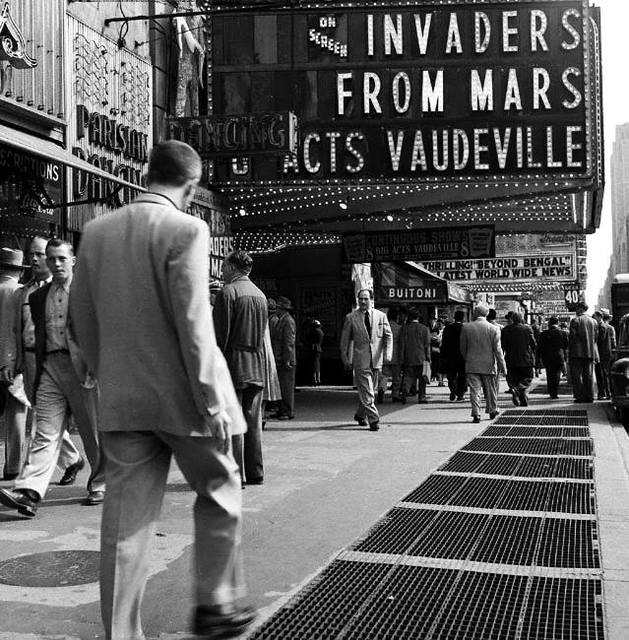 I am looking over issues of Variety from March and April of ’55, and in many cities I’m seeing Conquest playing either solo or as the lead film in a double-feature. It did $12,000 as a solo in at its opening stanza at Cincinnati’s Palace in mid-March, and perhaps $17,000 as a solo at Cleveland’s Loew’s State. That same week, it did $5,000 at the Fenway and $17,000 at the Paramount in Boston, playing with Roger Corman’s tiny Five Guns West for ARC in both situations; with AA’s The Bob Mathias Story as a second feature, Conquest did a ‘standout’ $18,000 at the Palms in Detroit, with Robert Lippert’s Silver Star, it did $12,000 at Buffalo’s Paramount. In April, paired with Republic’s Timberjack (at least this was a relatively strong color co-feature), Conquest did $21,000 at the Roosevelt, and was held over for a second week.

Conquest of Space did about $23,000 at its single week at NY’s RKO Palace, supported by those eight vaudeville acts; Variety called this gross ‘sturdy.’