A big positive response for the Buster Keaton documentary link last Tuesday, which is maybe why this time around I’m again leaning on links to online videos. First up is a full feature suggested by correspondent and old friend Malcolm Alcala, responding to our earlier Edgar G. Ulmer review.

It’s a rather good YouTube encoding of Ulmer’s 1961 L’amante della città sepolta with Jean-Louis Trintignant, Haya Harareet, George Riviére and Gian-Maria Volontè; it’s also called Journey Beneath the Desert and in this French iteration, L’Atlantide. It’s version number six or seven of the Benoit novel, L’Atlantide, which shares a lot in common with H. Rider Haggard’s She; this update keeps ‘Atlantis’ under the Sahara desert but adds an atom test subplot.

The version is in un-subtitled French but the good scan lets us imagine how beautiful original Technirama-Technicolor prints might have been — the movie reportedly had a 70mm release in Europe. The story is slow, talky and more than a little stiff overall — but Ulmer’s sets are really impressive, as is Carlo Rustichelli’s music score. Ariannè Ulmer Cipes receives screen credit for Assistant Direction — as ‘Ariannè Arden,’ the name she used when acting in Beyond the Time Barrier. The IMDB lists her as a dialogue coach, which may have been her own description of her duties on the movie. 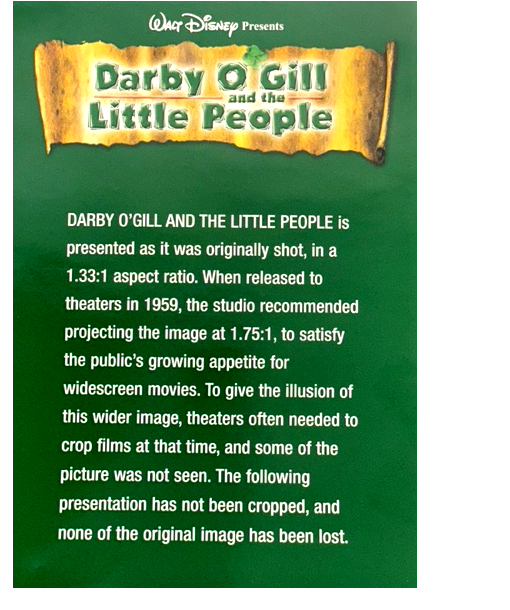 Someone alert our friends Tom Weaver and Jeffrey Wells: according to an official Disney disc insert from 2004, widescreen formatting is a nefarious conspiracy to cheat you from seeing the ‘whole original image!’

The picture on the left is the insert from the old Disney DVD of Darby O’Gill and the Little People, and it made us wonder why Disney would feel the need to get defensive about a flat full frame transfer of their fine 1959 movie — in 2004, before widescreen TVs had taken over, most everybody’s ‘family’ films were routinely put out flat on home video.

We thought the text was amusing, as if an attorney were making a backwards argument — completely misrepresenting the concept of widescreen exhibition — and acting as if they’re doing us a favor.

The image at left can be made more legible: it zooms bigger or can be opened in a new window.

The Disney Club has released a new Blu-ray of Darby O’Gill and first reports are that the aspect ratio is 1:66 widescreen, which is fine by us at CineSavant, although the film’s special effects were fun to scrutinize full-frame as well. When I was 7, by myself in the Hickam Air Base theater, those banshees sure had me worried.

The Warner Archive Collection’s new Blu-ray of Kevin Reynolds’ Fandango prompted me to go searching for an online encoding of the USC film that was the basis for the show. It’s called Proof, and it is exactly what a smart film student of 1979 should concoct to get the attention of Steven Spielberg — a nicely crafted ‘crazy road trip’ movie about the challenge three beer-swizzling clowns set up for their nerdy friend to prove his courage — at the flakiest parachute jump school imaginable. Smart work, Kevin — just like Bob Gale and Robert Zemeckis before you, you caught the brass ring and formed a solid (for quite a while) working relationship with Kevin Costner.

I remember Proof well because of its actor Marvin J. McIntyre, who is a hilarious original here: “ARCH!”  He repeated his character in Fandango and graced a number of good shows in the following years. Marvin was a good friend of a fellow editor in trailers and came by the shop often (quite a few years ago). Proof wasn’t Marvin’s first film role but it certainly got him going . . . Spielberg’s vote of approval had to help a little.