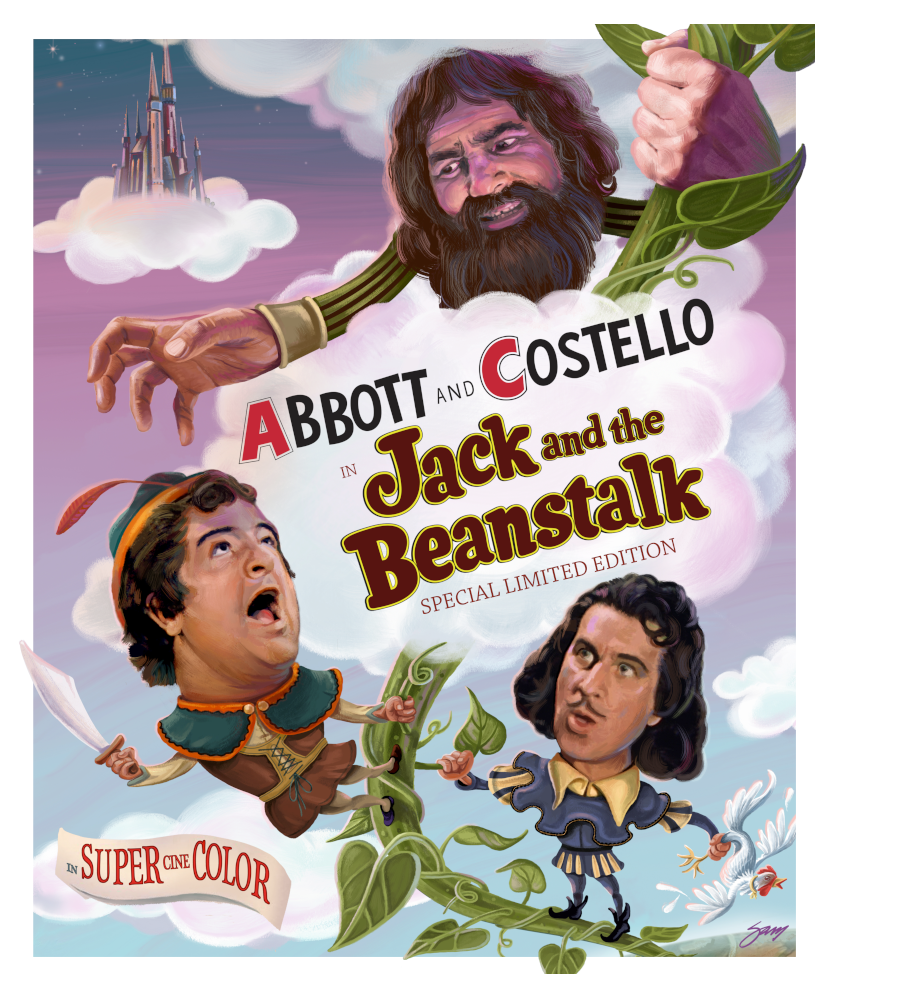 I’ve been talking to Bob Furmanek and Jack Theakston about the crazy original color sequence in Monster from Green Hell, and can say that I will soon have an illustrated follow-up CineSavant article about exactly that subject. So hold your Pulitzer nominations ’til you’ve read it. Bob & Jack are amazing film collectors — they seem to have a line on every arcane film mystery from the 1950s.

While getting my bad information corrected on that subject I also solicited some information about the progress of the 3-D Film Archive’s ongoing Cinecolor restoration of the Abbott and Costello feature Jack and the Beanstalk.

An ongoing Kickstarter Campaign for the restoration is still underway.  As I’ve tried to say before, the kiddie musical Jack and the Beanstalk has always appealed. I thought Lou Costello was fine when playing for children and wish his career had allowed him to make more pictures in that direction. Jack in the Beanstalk is disarmingly naïve; the main song is catchy and I even like the rudimentary dance numbers. The sappy romantic leads are exactly how such characters were pictured in children’s books of the 1950s. 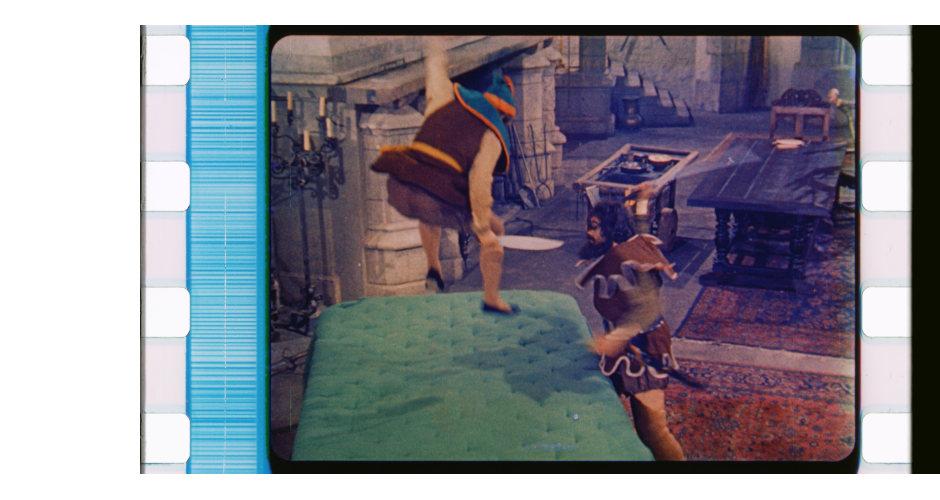 I DVR the show from TCM now and then and what keeps popping up is a degraded image with wilted color. When the 3-D Archive announced a restoration back in 2020 the news was a nice break from the Covid blues.

I asked Bob and Jack for an update. They asked me to distinguish their upcoming restored disc, to be released by ClassicFlix, from a recent VCI disc billed a a 4K restoration. The 3-D Archive’s project is much more involved.

How much more involved?  Let’s hope you like technical talk, because Jack Theakston didn’t hold back on the details of their work. Here goes, from Jack: 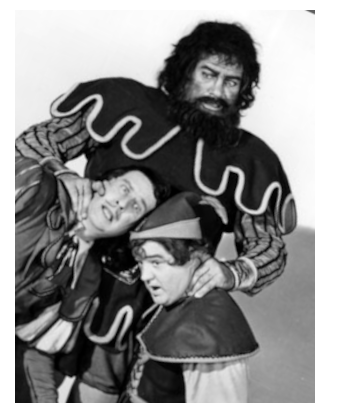 Bob and I had four to five prints of Jack and the Beanstalk to work from. As you know, no pre-print on this show exists.

The “A” print came from the Library of Congress, and short of a few splices and emulsion digs, was in fine condition.
The “B” print came from a collector on the West coast, and was in a rougher shape. Lots of splices, scratches, arc burns, etc.
The “C” print came from BFI, and looks to have been an answer print. The color sections were almost all misregistered and of bad gamma. The sepia sections were in near mint condition, however, making the “C” print the basis for the film’s bookend sequences.
The “D” print was odds and ends Bob picked up from a collector in the ’70s, and was quite incomplete, but yielded a couple of drop-in shots that we needed.

The biggest challenge for this show was assembly (from the four sources), which took a lot of video trickery to smooth over: a heavy application of cleanup, and worst of all, color grading. I think we spent something like two and a half weeks total color grading this film to get it to look near normal. The original SuperCinecolor prints had an odd artifact which to us looked like some sort of projection arc burn effect, where a box in the middle of the image stays static. Much of the color grading was spent dialing this out. This is the only SuperCinecolor print that I’ve seen that had this issue, and Bob and I suspect that it was an artifact in printing, not in projection.

We found SuperCinecolor to be a nightmare to work with in several different ways. There is Cyan-Magenta-Yellow dust from the first positive dupe, then there’s Red-Green-Blue dust from the dupe negative that’s used to print the final film. The colors are very good, but this three-generation intermediate adds considerable film grain. Comparing it to the one section of original camera neg we have (feature outtakes) shows that a lot of detail was compromised. The one blessing is that the dyes SuperCinecolor used for the color layers are very stable, and most of the information we needed was all there. 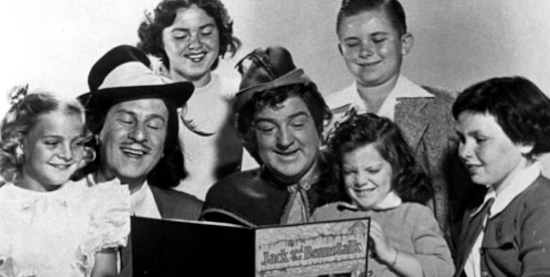 Thanks Jack. I will all add that all of the film’s master 35mm elements — which include the original Eastman color camera negative and red/blue/yellow separation masters — went missing when worldwide rights were sold in December 1959 to Sterling Television in New York. RKO Radio Pictures acquired rights for theatrical reissue and struck new B&W 35mm prints in March 1960.

When I did extensive research with Joe Trentin in the RKO files back in the mid-1980s, they had no record whatsoever of receiving any color master elements. It’s hard to believe — those master color elements have been MIA for a VERY long time.

This restoration group is always working on more than one project at a time, so I was happy to read here and there that Jack and the Beanstalk was coming along nicely. Jack Theakston’s March 5 Facebook post read

“If you contributed to Jack and the Beanstalk your wait will be well met. Bob and I just signed off on the color and, well . . . wow. Also, we were able to make the sepia sections look like preprint quality. Picture is 99% done. Audio is next. Wrapping bows on special features, and this is out of the door by the middle of the month.”

Mr. Theakston forwarded the sample frame with the final color. I haven’t tweaked it as I do most pix on CineSavant. As with some of the other images here, if you zoom it or open it in a new window it gets much larger: 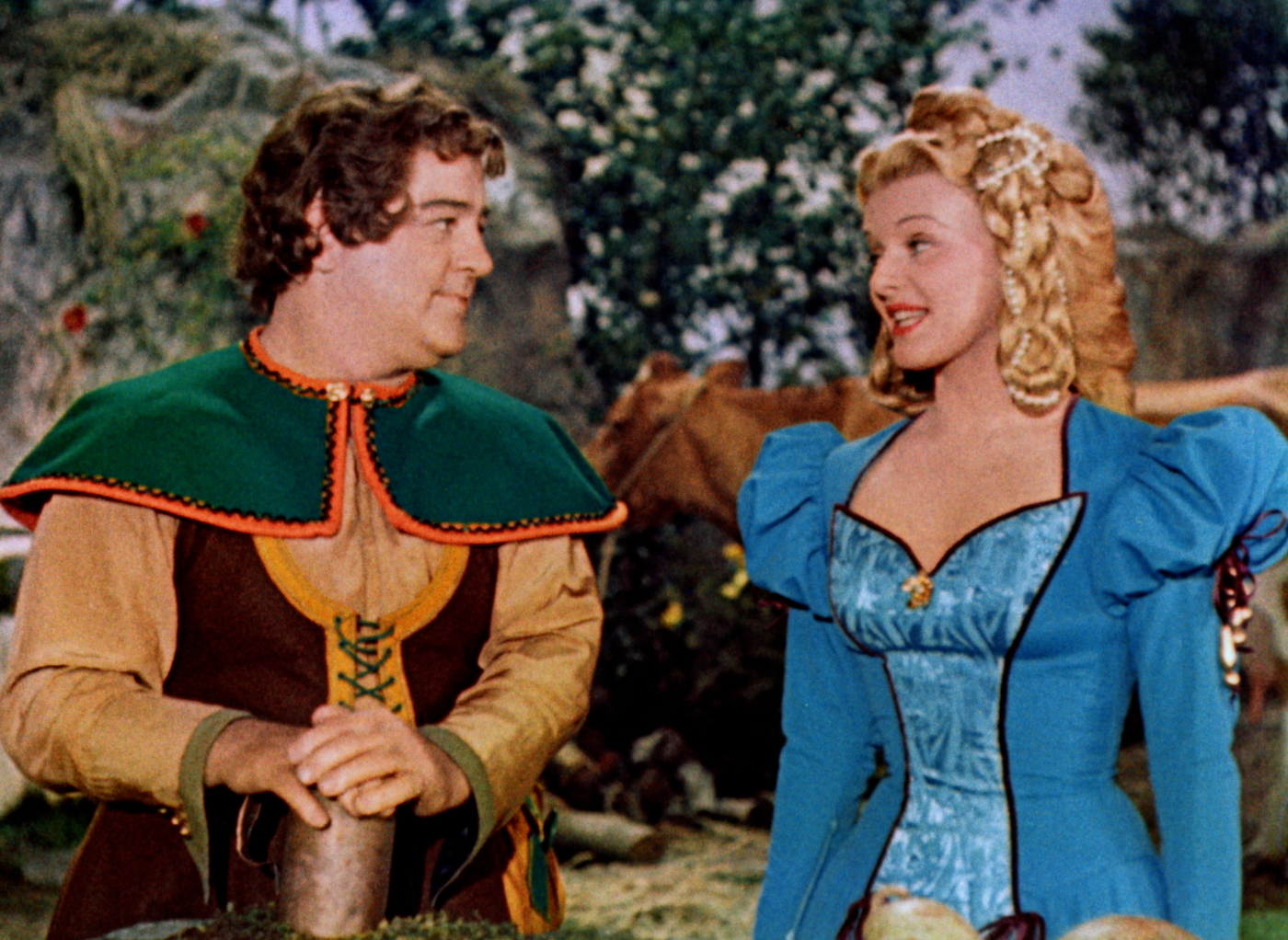 Jack and the Beanstalk is a weird favorite for me. Many people love The 5,000 Fingers of Dr. T, a show that always gave me the creeps. But Jack always did the trick for some reason. Lou Costello looks like he really wants little kids to be happy. He makes me remember being an uncritical six year-old, in the kiddie spirit. ClassicFlix is as yet giving no projected date for their Blu-ray release. I’m hoping for the best. 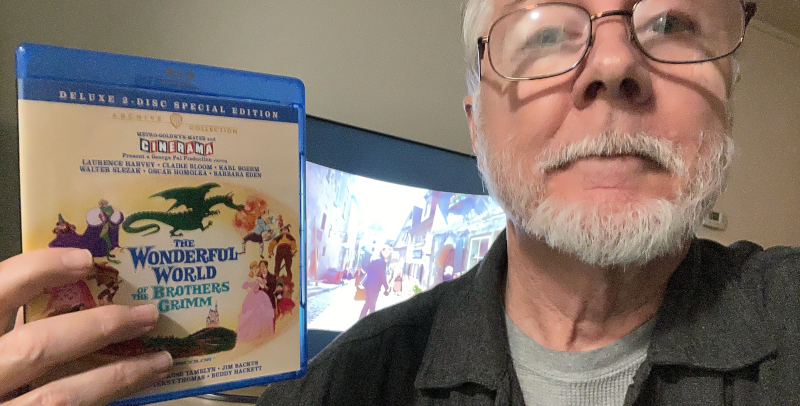 Meanwhile, back in the mundane world of disc reviewing, newly arrived and ready to review is the long-awaited full video restoration of George Pal’s The Wonderful World of the Brothers Grimm. I watched it last night, and the fabulous presentation really helps. It could be David Strohmaier and Tom March’s biggest accomplishment, taking a show nobody thought could be restored all the way to a final product this pristine.

Just as impressive was a 40 minute restoration making-of video, which becomes exceedingly technical. We loved every minute.