It’s a windy day in Los Angeles. Criterion’s announcements for April contain some hot titles, starting with Vittorio de Sica’s must-see Miracle in Milan, a fantasy neorealist spinoff that may be the director’s most moving, meaningful picture. Equally anticipated are Frank Tashlin’s crazy The Girl Can’t Help It, Alex Cox’s wildly subversive political western Walker and Bertand Tavernier’s ode to Jazz ‘Round Midnight; plus the Nigerian drama Eyimofe and a 4K upgrade of the documentary For All Mankind. 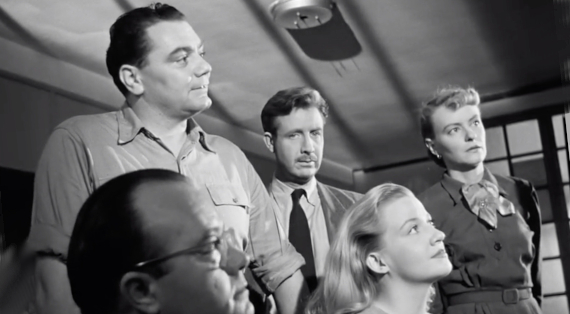 I was knocked out by last year’s TCM debut of Robert Siodmak’s ‘different’ story of labor trouble in a New England plastics factory and talked to the expert that restored it; now Flicker Alley has their Blu-ray special edition ready to go for March 15. My take on the once-obscure The Whistle at Eaton Falls is that it’s a ‘reverse film-noir’: it comes on like a disaffected critique of the free enterprise system, but ends with a well-earned positive message. Lloyd Bridges leads an interesting cast, with early roles for Ernest Borgnine, Murray Hamilton, Arthur O’Connell and Anne Francis. Flicker Alley’s full extra content includes pieces on producer Louis de Rochemont, a booklet and an audio commentary by Alan K. Rode.

And thanks to a steer from correspondent Jonathan Gluckman I made a fun discovery on YouTube, the entire feature 24×36: A Movie About Posters. It’s a documentary about the history of movie advertisements and some of the artists and illustrators that ought to be famous for painting them, as told by artists, collectors and gallery owners. The graphics-oriented show looks great; the title refers to the size of a standard American One-Sheet, 24×36 inches.