A nice announcement last week from restoration specialist Dave Strohmaier : his long-in-gestation filmic resurrection work on George Pal’s The Wonderful World of the Brothers Grimm is apparently complete, and about to be premiered at The Museum of Modern Art in New York. Dave says that ’22 will be the year of Grimm, and I hope he’s only talking about this long-overlooked roadshow spectacle.

Mr. Strohmaier’s long association with Pacific Theaters / Cinerama & Warners has completed, or come close to completing, HD remasters of all the Cinerama travelogues, the Cinerama format copycat productions, and soon the two MGM features filmed in the unwieldy three camera – three projector process. If Dave’s publicity text is correct an eventual Blu-ray will include a Smilebox encoding, which some viewers don’t like but I enjoy a lot. Starring Colonel Travis and Peeping Tom as those lovable Grimm Brothers!

The welcome link-nod this week comes from dependable correspondent Edward Sullivan: a steer to the National Film Board of Canada presentation Hoodoo McFiggin’s Christmas. It’s more of a storyboard picture book movie than really animated, but it has a droll appeal … a sideways take on the usual ‘be grateful for your lousy presents’ holiday moralizing.

Ed tells me that the narrator — what a precise reading he gives — is Alan Maitland. Ed also offers another Christmas-themed radio piece from the CBC narrated by Maitland: The Shepherd. It’s a non-combat tale about a military flyer. The ‘Vampire’ he talks about is the name of an early Brit jet plane. 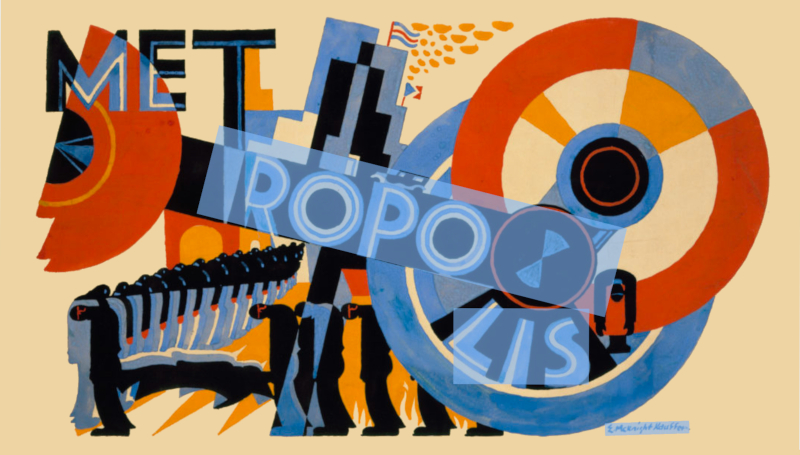 And lastly, this isn’t at all holiday-oriented but I liked it, so there. Correspondent and frequent advisor “B” sent along this vintage poster image, with a link to a Cooper Hewitt art exhibit website on an American artist once called ‘the poster king,’ Underground Modernist: E. McKnight Kauffer. Kauffer’s approach was definitely radical at a time when most public art made Norman Rockwell look radical. One poster promoting London’s Underground is almost scary.

The radicalism is all in Kauffer’s pleasing sense of design. Although this abstract Metropolis poster got my attention, it’s the only one of the 20 examples that advertises a movie. All catch the eye and I have to admit one or two were definite head-scratchers. Thanks “B,” with twenty more years of this kind of exposure I might be able to add ‘cultured’ to my list of personal adjectives. Hey, although Kauffer likely did not write the text, one poster shouts “Death to Facism! Liberty to the People!” Gotta love that sentiment, even if it’s in support of Marshal Tito.