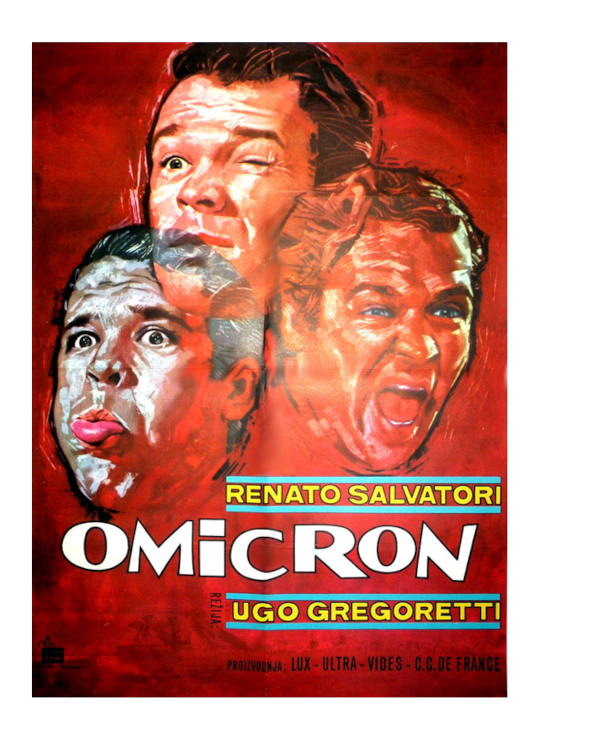 No, your favorite terrifying virus is not being made into a new motion picture — this show came out almost sixty years ago. The Italian social satire Omicron (1963, Ugo Gregoretti) is about a space alien that possesses an Italian factory worker (Renato Salvatori). If you’ve heard the movie mentioned at all, it’s possibly because it was one of several titles up for awards at the ’63 Trieste Sci-Fi film festival, where X-The Man With the X-Ray Eyes, Ikarie XB 1 and the Russian Amphibian Man were in competition. It’s on YouTube, but not with subtitles.

I thought of the old movie not just to drop a stack of movie titles, but because it reminded me of something. Our worldwide Pandemic, about to go into its third devastating year, continues for several dismal reasons.

One cause is rampant disinformation. Overworked medical staff and health officials are prevented from getting the virus under control — more variants will continue to form, with so many unprotected hosts to receive and incubate them.

When I heard the name ‘Omicron’ I thought, at least that name sounds like something potentially sinister, something to be afraid of.  It’s just a Greek letter, but in movie terms it reminds me of a name that a ’60s spy movie might give to an Evil Computer that wants to take over the world.   Who is disturbed by the name ‘Delta Virus?’  If the military can give mobilizations and missions politically-spun names like ‘Operation Freedom,’ why can’t we apply some better PR to this Pandemic?

Remember this name, for a nasty monster that eats little girls back in 1981’s Dragonslayer?:

The stack of syllables in ‘Vermithrax Pejorative’ sounds utterly loathsome in itself, even when we have no idea what it means. That’s what’s needed, something to make one’s skin crawl. Anybody have any good ideas for a shiver-inducing name for the next killer mutation?  The Satan Bug and The Andromeda Strain had their day, but we need something that will have every citizen rushing to get ‘the jab.’  C’mon, step up and play good propagandists for world health and stability.

This second link is easy, it’s simply the Milestone Newsletter for December. Those people work up this page every month, and it always has interesting links, not just plugs for their product. Charlie Largent is working on a review for the Milestone/Kino disc of The Mystery of Picasso that I can’t wait to read — the 1955 non-fiction film is by director H.G. Clouzot, who simply records the artist painting in impressively creative ways. For part of the time he paints on glass, and we watch the act of creation from a vantage point where we see everything. And part way through the film, Clouzot’s films changes aspect ratios, to CinemaScope. I hope that this new remaster finds the right way to translate that to Blu-ray.