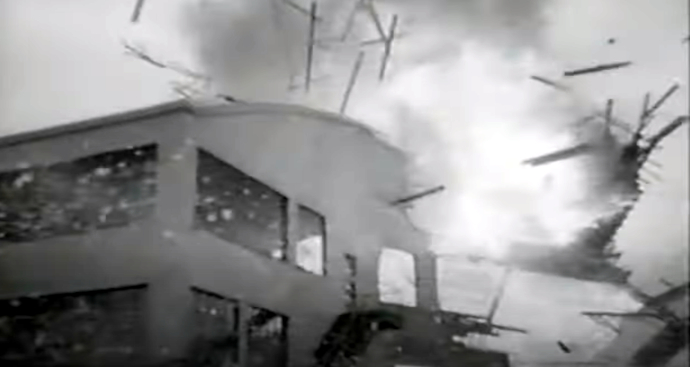 Zoom, Crash, and Boom!   — This is still a fun reel of Howard and Theodore Lydecker special effects miniatures clips: an endless string of ‘Rocketman’ zip-flights, a few alien spacecraft, and then a string of explosions, some more realistic than others. Hey, the factory explosion that became stock footage for Earth vs. The Flying Saucers is here, too.

The YouTube video is called Lydecker Brothers : Special Effects. The first half of the reel is repetitive, but we’re still impressed by how well they hid those wires. A.D. Flowers used the same physical-gag ‘flying’ technique for 1941.

Thanks to David J. Schow for the link: the morbid YouTube empress Caitlin Doughty has a new ‘Ask a Mortician’ episode uploaded with the intriguing title America’s Forgotten Vampire Panic. Think New England in 1799, when mothers apparently bore a dozen children because fewer than half lived to be adults.

Doughty makes it funny and historically interesting, and the corny editing is fun too. I get the message that people were just as superstitious-nuts back then as they are now, but they just had a better excuse in the 19th century. Ms. Doughty also ought to be in movies, she’s charmer with a hundred amusing faces.