This is a strange weekend: I had new reviews prepared and ready to go, but couldn’t post them. My computer went down on Thursday, a total mess. Two days later, thanks to help from the brilliant Allan Peach, CineSavant is back in action again, ready with reviews to fill hearts with joy and love (and empty pocketbooks) everywhere.

The one thing that seems to work is writing, so this is the right time to come across with a BOOK REVIEW that’s been percolating for a few days. The book is a winner.

Joseph McBride’s Billy Wilder: Dancing on the Edge
is an analytical study of the great director and his films. I’ve read at least three studies of our greatest American writer-director but none as rewarding as this one. As a young critic McBride interviewed Wilder and watched him direct one of his later films. His research is far more extensive than anything I’ve seen for a film director, with all sources carefully annotated.

One reason those previous books kept me interested was because of Wilder’s humor. Billy Wilder was noted for his incredible wit in quotes given to newspapermen or just related by his wife Audrey or his associates, jokes about other directors that could be adoring (Ernst Lubitsch) or derogatory (Sidney J. Furie), and of course the edgy humor about ‘handstands in the shower’ or comparing the Germans’ money to their toilet paper. His caustic wit had bite and relevance because it always called out something that was true. Michael Todd’s death in an airplane crash became national news, what with Elizabeth Taylor becoming a widow, etc. . Wilder’s response was a classic ‘too soon’ bit of morbid humor: he noted that most notices omitted the fact that a number of other people had died too, and suggested that those forgotten souls should be given some sort of credit like: “PRODUCER TODD DIES IN CRASH… additional guest dying by…” 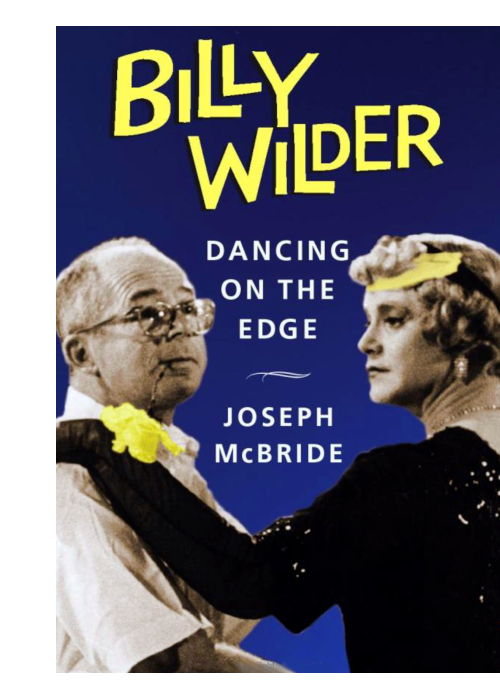 When one book wanted to ‘explain’ Billy Wilder’s psychology, it tried to pass off a single romantic episode from his youth as ‘explaining’ the director’s entire jaded, soured worldview on women and romantic disillusion. Wilder called it nonsense, and it now comes off as biography as screenwriting, with an outsider picking one incident from a person’s life and deciding it’s a magic key to understanding.

As related so thoroughly by Joseph McBride, Billy Wilder’s life was so eventful, dramatic, and tragic that giving one event special precedence seems silly. In 1920’s Germany ‘Billie’ Wilder was a hard-charging busy reporter and screenwriter, always rushing around and aggressively pursuing whatever he was after. Incredibly sharp, he could see where Nazi Germany was going. He split for Paris and finally Hollywood even though it meant losing all of his possessions. After his first visa expired he spent months waiting in Mexico for entry status; this man knew he was lucky to get in. Later on he lost several members of his family to the Holocaust, including his mother. He went back once to try to persuade her to leave with him, but she wouldn’t budge. That episode surely had a much more serious bearing on Wilder’s general world view, a point that McBride returns to time and again. Of course Wilder had to be a tough-minded man, to continue with a high risk, high tension career as a screenwriter and eventually director.

Joseph McBride fully covers Billy Wilder’s career ups and downs. Wilder could hold grudges and he didn’t hold back criticism of collaborators that gave him trouble, like Humphrey Bogart. Industry opinion went against him in the middle 1960’s for the strangest reason — scores of lame, puerile sex comedies were released every year, yet Wilder’s refreshingly adult Kiss Me, Stupid was singled out as obscene, and Wilder reviled as a crude purveyor of bad taste, misogyny and smut. Big critics decided that he abused his actresses and that his cynicism hid a cruel streak… and this was in 1965, when the whole culture was becoming liberalized. The book’s aggressive defense reminds us that in reality Wilder gave many actresses terrific characters to play. 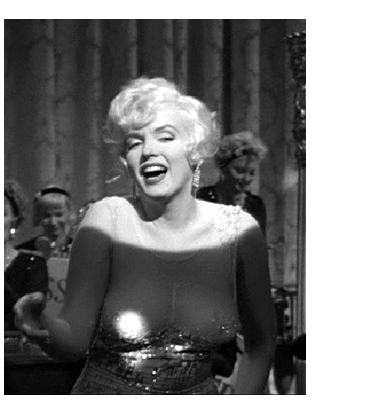 McBride is first and foremost a critic with a conscience. His judgment favors some Wilder pictures as masterpieces (Some Like it Hot, The Apartment, Avanti!) but he values others less, labeling a few highly entertaining films as failures by the yardstick of director achievement: The Seven-Year Itch; One, Two, Three, even the two marvelous Audrey Hepburn pictures Sabrina and Love in the Afternoon. So we have to remind ourselves that this is a critical assessment in which the artist comes first — he’s not just a reviewer communicating what works and what doesn’t (although McBride doesn’t think the consistently hilarious One, Two, Three is even funny.)

But the hard critical assessment gives us more than enough information to make up our own minds. McBride closely documents the personalities of Wilder’s two main writing collaborators, Charles Brackett and I.A.L. Diamond, in close detail. Brackett had differing politics and a much more patrician attitude toward entertainment, which at first balanced Wilder’s excesses. As a serious man of letters, Brackett surely completed Wilder’s assimilation and mastering of the English language. Their screenplay for Ball of Fire shows Wilder in full command of American jargon and idioms. A decade later, Diamond appears to be an ideal writing partner. Detractors of Wilder guessed that Diamond ‘softened’ Wilder and gave him a heart, whereas McBride makes an excellent case that Wilder was the romantic, finding touches of human warmth in most every picture.

McBride puts the usual reportage of Wilder in a different perspective. Wilder never thought he could touch his idol & mentor Ernst Lubitsch, but his own constructions are equally bittersweet, and add a very Wilderian seriousness, a dimension of real life. On the subject of homosexual tension in Wilder’s films, McBride thoroughly charts a pattern from the match-striking business in Double Indemnity through the prisoners’ drag charades in Stalag 17, and forward to the teasing of Sherlock Holmes’s ambivalent sexuality. I hadn’t realized that Wilder and Diamond had made sexual confusion so much the backbone of Some Like It Hot, and the chapter-plus devoted to that topic is fascinating. It points up the fact that Wilder’s humor was never just a stack of ‘jokes of opportunity.’ We watch Jack Lemmon’s feminine side come to the fore as soon as he puts on a dress. 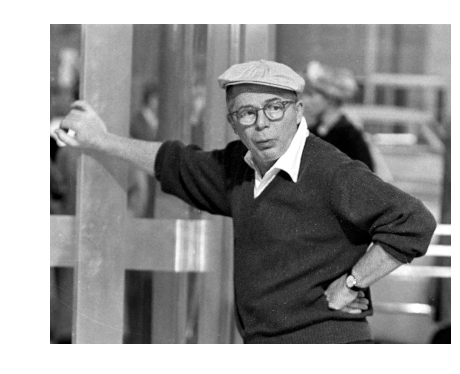 The Holocaust theme arises in odd places, not just A Foreign Affair but in the odd Bing Crosby sort-of musical comedy The Emperor Waltz, where the stars’ romance is compared to two dogs, one royal and one a commoner. With a few clues, McBride makes the case that the extermination theme comes out when some villainous nobles plan to quietly kill the offending dog. I can’t say that the insight makes we want to see The Emperor Waltz again.

McBride doesn’t go in detail as concerns Wilder’s other one-shot writing partners, except for a few notes on Raymond Chandler. He instead sees the first few post- Brackett years as a time of ‘running for cover’ after being clobbered by the negative reaction to his acid valentine to journalistic corruption Ace in the Hole: a couple of Broadway adaptations, the Hepburn ‘failures’ (can’t quite follow him there) and the outlier project The Spirit of St. Louis, on which McBride expends as little ink as possible. With St. Louis we realize that McBride aims higher than just presenting an encyclopedia of production details. Wilder’s account of Lucky Lindy’s was massacred and disemboweled by pressure from Lindbergh himself, removing everything but the bare bones of the famous flight. I know it’s considered a failure but it’s still highly entertaining, and I’d give Billy Wilder full credit for stretching his range.

For this book McBride instead focuses on the artist, making compelling connections between personal experience and the brilliant insights in his movies. The Private Life of Sherlock Holmes, Avanti!, Sunset Blvd., Kiss Me Stupid are examined from all points of view. The book begins chronologically but then begins to break up by theme about half-way through; the last quarter concentrates on Billy Wilder’s decline, a choice that works well because Wilder’s previously unerring knowledge of his audience can only be understood when Wilder begins to lose his grip. Wilder’s self criticisms are just as unsparingly wicked as his earlier critiques of others. After the awful Buddy Buddy, when an interviewer (Schlondorff?) assures him that he still has avid fans, Wilder’s comeback quip is a mordant Kool-Aid joke: “Oh yeah, a few fans. I’ve got a cult. I’m going to get them together and take them to Guyana.” (Paraphrase)

What we really appreciate is the organized approach and his entertaining prose, not a given in serious film studies. Billy Wilder comes alive as a remarkable man… I already want to re-view four or five of his movies after this read. Of all of Joseph McBride’s film books, I think this is the one I’ve enjoyed the most.

Joseph McBride’s Billy Wilder: Dancing on the Edge is a handsomely printed hardcover, and likely a good gift idea for the right recipient. At 680 pages it’s a serious contender for film book of 2021.

Here’s the publisher’s page for the book: Columbia University Press Billy Wilder: Dancing on the Edge.