Gary Teetzel points the myriad fans of Dr. Frank Baxter to an episode of The Burns and Allen Show in which Baxter guest stars. We ’50s kids know Baxter from his Frank Capra Bell Science TV specials, and Sci-Fi fans have always wondered what possessed him to perform as a fake scientist in the crazy prologue for that (ulp) epic The Mole People.

The real-life USC professor Dr. Baxter had quite a roll going in 1956, in terms of TV exposure. He apparently inspired this episode of The Burns and Allen Show because of a TV show he made for CBS talking about Shakespeare. Gary explains: 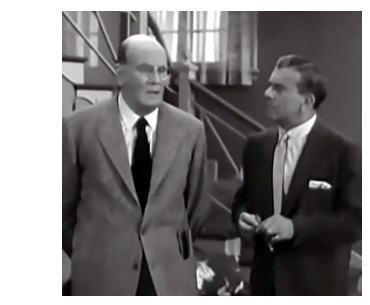 “The episode aired in October of 1956, one month before the premiere of Our Mr. Sun, the first of the Frank Capra Bell Science TV specials with Baxter, and two months before The Mole People hit theaters and changed the landscape of American entertainment forever. Both Our Mr. Sun and The Burns and Allen Show aired on CBS, so I wonder if his appearance was a promotional tie-in for the Bell Science specials.”

“BTW, there is a subplot in which announcer Harry Von Zell wants George to help him get an acting role through producer William Goetz. Goetz’s name turns up a lot on the show, so he must have been a real-life friend of Burns. — Gary“

Dr. Baxter is actually not bad playing opposite George and Gracie; his delivery fits the show’s near-surreal take on sitcom situations. Something tells me that Baxter’s jaw-dropping prologue for The Mole People changed his mind about pursuing more film roles, although his guest shots on TV (as himself) kept him busy for ten more years.

Well, the Warner Archive Collection has arrived in a big way — we will be reviewing most of these in the next few weeks. We’ll try to get a couple of horror items up before Halloween — especially the Val Lewton pictures and the Karl Freund/Peter Lorre classic. And the western The Naked Spur is a major favorite — I’ll be discussing it with Dick Dinman on his podcast, in a few weeks.

I remember Night Shift from when I was assisting on TV commercials in the early 1980s. It and the movie Splash! were the first time I saw a studio-produced ‘Electronic Press Kit’ (EPK) edited for a feature film — a tape for distribution to media outlets with the trailer, interviews, a featurette and maybe a music video, all fluffy hype for easy access for TV producers. Four years later at Cannon I was cutting them, and after that I did several for MGM and Orion, like Silence of the Lambs and The Addams Family.