For CineSavant film fans in the Palm Springs area — you know, anywhere West of the Mississippi — you’ve got instant weekend plans if you need another big-screen dose of Noir Nirvana. The 2021 Arthur Lyons Film Noir Festival is a go, and it starts in two days: Thursday October 21 through Sunday October 24. It’s a chance to mix, hobnob and maybe even double-cross the deans of noir Alan K. Rode and Eddie Muller, plus special guest author Steven K. Smith. The schedule includes the rare, hard-to-see items we expect like Playgirl with Shelley Winters, and The Cruel Tower with Charles McGraw.

There’s a foreign double bill with an Argentinian noir, and H.G. Clouzot’s Quai des Orfèvres, and an interesting screening of the James Cagney gangster movie Angels with Dirty Faces, which hasn’t been on TV or in theaters for years. For crowd-pleasing cred, the sure winner is Saturday night’s Violent Saturday, an all-star heist picture given a violent climax with a Quaker farmer. Guest interviewees are the daughters of Victor Mature and Dana Andrews, and the son of Richard Fleischer. Check out the Arthur Lyons Film Noir Festival website.

This article from the August 24, 1955 Motion Picture Exhibitor describes Promotional Efforts on behalf of the Sam Katzman double feature of It Came from Beneath the Sea and Creature with the Atom Brain. We can barely believe that the theater manager created a stop-and-stare display by filling an aquarium with muddy water and some plants, topped by a sign declaring that it contains an “invisible IT.”  But he claimed that it worked, that it attracted gawkers.

These theater managers had a lot of nerve, asking lowly barely-paid ushers and candy concessionaires to ‘pledge’ to do promotional work on their own time. 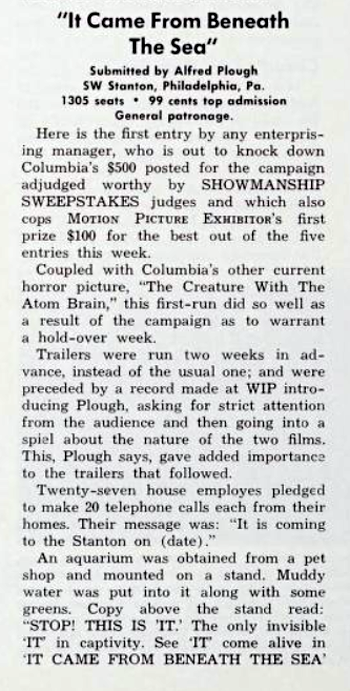 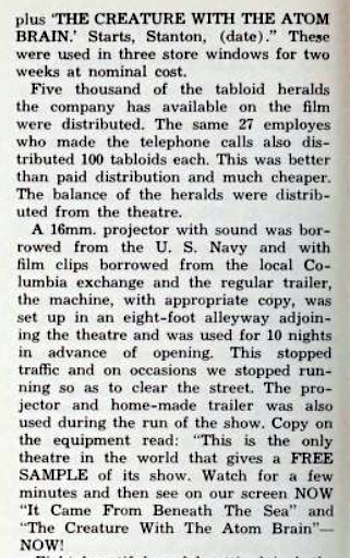 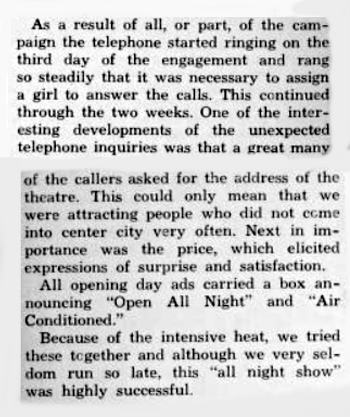 The double feature was popular in Boston: 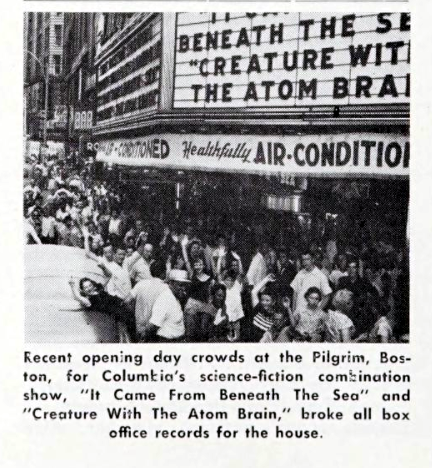 I remember a mob scene like that in downtown Honolulu when I got to see Gorgo double-billed with Caltiki The Immortal Monster.. It was a packed house, with people being let in all the time depending on what seats were empty. I guess the fire marshals just looked the other way — although theaters were staffed with enough ushers to handle almost any unruly behavior.