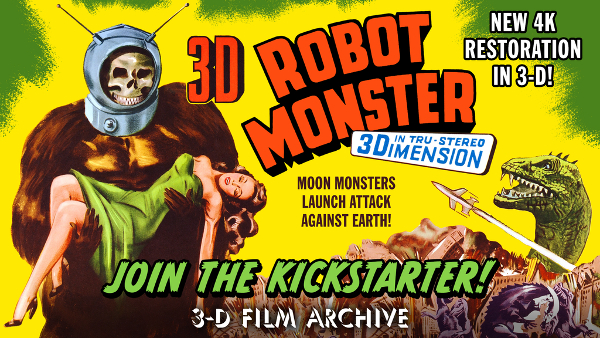 I almost don’t know what to say — the 3-D Film Archive has announced an upcoming full 3-D restoration of the Holy Grail of 1950s schlock sci-fi, auteur Phil Tucker’s masterpiece Robot Monster. The Archive has launched a Kickstarter campaign to get the ball rolling.

It’s a worthy cause, for sure. “We cannot, but we must” admit that the movie’s ‘Tru-Stereo Three Dimension’ entitles the glorious intergalactic saga of Ro-Man to be a cultural ground zero event of its decade. Yes, 2022 promises to be The Year of the Automatic Billion Bubble Machine, from N.A. Fisher Chemical Products, Inc.. Now who is going to license a line of sensational Robot Monster toys?

Is it cartoon madness, or great art?  Correspondent Jonathan Gluckman has sent us a link to concert madness — pianist Yanni Tan aspires to ‘ivory synch’ the entire piano score to the Tom and Jerry cartoon The Cat Concerto.

The official title is Yannie Tan plays the Cat Concerto, Hungarian Rhapsody No. 2 by Liszt, but that’s far too lengthy to print here. The fun part is that Ms. Tan performs wearing cat ears, and with cat whiskers on her cheeks. Who says there’s no high kul-tyer at CineSavant?

And Dick Dinman’s cheerful podcast DVD Classics Corner on the Air turns its critical eye toward Criterion’s recent Blu-ray of what might be Samuel Fuller’s most accomplished movie in A salute to Criterion’s Pickup on South Street.

Listeners beware — Dick’s co-host is none other than this reviewer. Dick calls this the liveliest podcast we’ve yet had — talking about Richard Widmark, Jean Peters and the sheer fun of this upside-down Anti-Commie thriller.