Hide your significant other’s credit cards ! — For the Ray Harryhausen fan who has everything, a company called Star Ace is offering for sale detailed soft rubber Gwangi replicas — you remember, the snarly, chompy Mexican Allosaurus from a certain 1969 Charles H. Schneer movie. Tipster Gary Teetzel has given the online sales presentation for the Valley of Gwangi (Deluxe Version) doll some careful thought:

“Mighty nice… but for $275 Gwangi should come with a minimum of extras: multiple cowboys on horseback with lariats; an evil dwarf figure that fits in his mouth; an elephant for Gwangi to fight; and a cathedral play set that comes pre-soaked in kerosene for easy burning. That non- flame-resistant cathedral feature is a one-time play opportunity.“

Next, thanks to a tip from David J. Schow we have Jenny List’s Hackaday article End of an Era: NTSC finally goes dark in America. Already obsolete when finally adopted in 1954, The National Television System Committee’s analog color system is officially dead now, at least in the U.S.. I worked with it roughly for twenty years, and heard nothing but abuse from video engineers. It was of course mocked with the acronym Never Twice the Same Color.

My video scientist friend long ago convinced me that the system adopted was chosen because it fit the proprietary needs of large corporations — something that’s happened every step of the way when universally-applicable systems were introduced. One of the latest and most ignominious examples is HD TV … the system adopted wasn’t the best but was sponsored by a corporate giant. (Just the same, it looks pretty good to me.) Wikipedia’s article about NTSC and the conversion to digital formats is here. 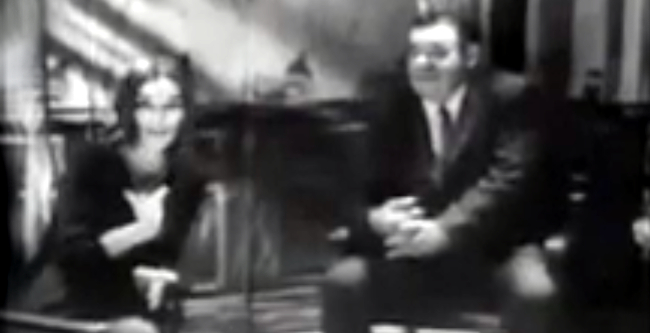 Sorry, it’s not the photo above that’s fuzzy, CineSavant has made YOUR EYES go bad!  Tom Weaver noted this long-lost Kinescope of an interstitial horror-host segment from Shreveport, Lousiana late-nite movie show called  Terror!   Is it an incredible, fantastic keepsake from the old (NTSC) years of TV broadcasting?  (I ask because Tom was none too impressed.)

The host segment appears meant to fit between screenings of Frankenstein Meets the Wolfman and The Mummy’s Tomb.  Lon apparently reads his tirade from a teleprompter, and finishes with a ‘Mummy Walk’ into the lens. When he rhapsodizes incoherently about ‘gators ‘n’ crocks,’ we wonder if whoever wrote Lon’s copy had in mind his character in the 1959 The Alligator People. That movie does take place in Louisiana, after all.

Maybe it’s just plain awful, but hey, it’s Lon, perhaps earning some money on a public appearance tour, for what we can’t say. The excerpt isn’t dated but the IMDB says that KSLA Channel 12 Shreveport ran the Terror! show between 1963 and 1965. Ruth Sprayberry was “Evilun;” her sidekick witch Malicea was played by Billie Jardine. The Youtube entry is called Evilun Hosts KSLA’s Terror! with Lon Chaney Jr..