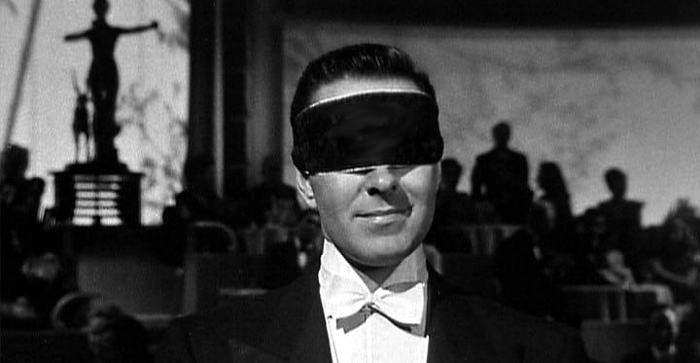 Dick Dinman is back today with another DVD Classic Corner On The Air podcast, this time about the new Criterion release of the ‘carnival-noir’ classic Nightmare Alley. Dick’s guest interviewees are Tyrone Power Jr., Kim Novak and Colleen Gray, all speaking to the talent and star power of Tyrone Power, whose favorite film this was. CineSavant’s review of the disc is here.

Also in the offing on the podcast front, from correspondent W. David Lichty, is an online talk about the new CD release of Jerry Goldsmith’s unused music score for The Public Eye, the movie reviewed at CineSavant here. Their blurb: “This is music that will be brand-new to most Goldsmith fans, and you’ll hear plenty of illustrative excerpts from the new album along the way.”

Gary Teetzel throws us a link to an Auction of Willis O’Brien Memorabilia, a great many collectables associated with the famed animator and special effects master. One of the items is O’Brien’s Oscar statuette. The first thing we speculated is, how much of this material will Peter Jackson grab up?  The minimum bids quoted are certainly in line with High Art.

The middle picture is a still from a test (?) for O’Brien’s pre-war project ‘War Eagles.’ It’s not easy to see, but it depicts an allosaurus (liberated from O’Brien’s abortive Gwangi project) chomping down on one of the title eagles. Down the stack are collections of rare photographs from other O’Brien movies, and beautiful concept artwork for un-filmed projects we never heard of. We did hear of one — King Kong v. Frankenstein, which we haven’t seen since a couple of drawings were printed in Famous Monsters.

Gee, Heritage Auctions, these auction items look really nice. I’d like to bid on some of the still photo collections. Could you post each rare photo as a separate .png graphic, at maybe 400 dpi?  That would really encourage me to submit a healthy, multi-million dollar bid.