Whoah … I drifted over to Facebook Messenger on Wednesday and discovered that readers, friends and contacts had been sending me messages for over a year, some of them fairly important, and I hadn’t checked in. I’ve rushed out some apologies, and have sent some info for a friend’s audio commentary, which I hope isn’t too late.

For the record, I correspond much more consistently via Jurassic-era Email, at cinesavant@gmail.com &mbsp;That’s the best way to reach me — I check it every couple of hours. I was complaining about not having Column items, and my own FB contacts were offering me plenty of them. 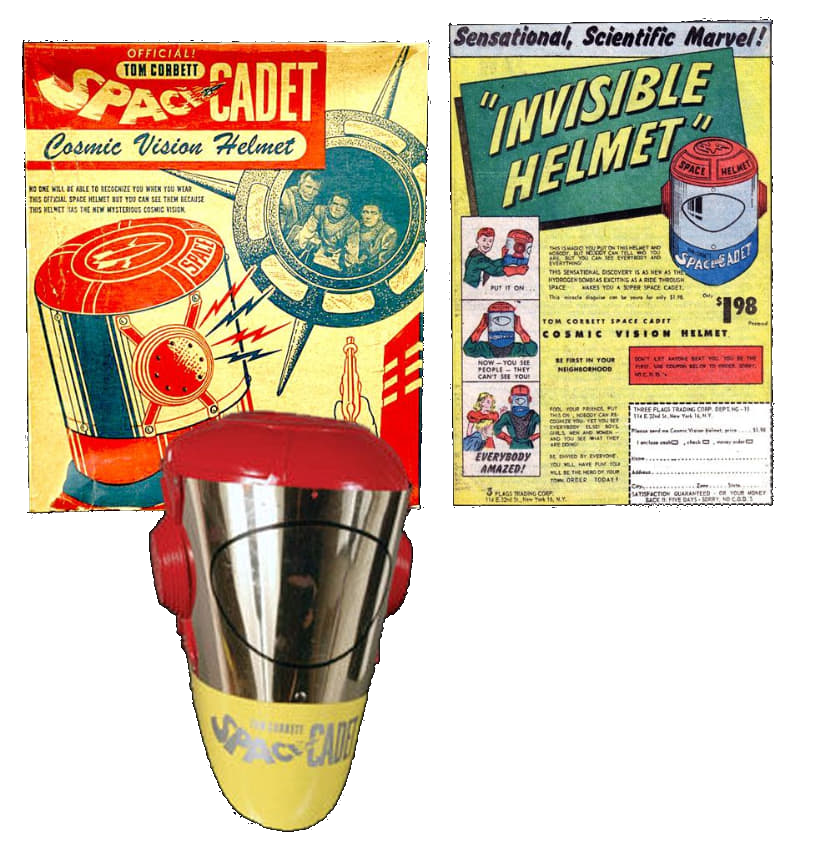 ←  Back in July of 2020 I asked if the Toy Space Helmet seen in the 1953 movie It Came from Outer Space was a movie prop, or a real toy a kid might have bought back then. Correspondent Tim Williams sent me a note with this vintage ad for a Tom Corbett Space Cadet Cosmic Vision Helmet, a note that I finally found a year later. Tim says it’s a match for what’s seen in the Jack Arnold movie. To better read the text, the image can be zoomed or opened in a new window.

Was I born too late, or what?  I really would have wanted that space helmet around 1958 or so. I remember playing with a plastic test pilot helmet, pretending I was a Mysterian space pirate.

Another message missed: back in February helpful Jack Criddle forwarded his Mixcloud Play Morricone For Me podcast called Black Cowboys, recorded for this year’s Black History Month. I only missed it by three months. Here’s the rest of Jack’s blurb: “Play Morricone For Me delves into the history of real-life African-American cowboys, exploring onscreen racial representation (and the lack thereof) in the western genre. Featuring music from the films of Herb Jeffries, Woody Strode, Jim Brown and others, from The Bronze Buckaroo to Django Unchained and beyond.”

Correspondent Michael Ryan asked if I knew of an online review site for Laserdiscs that he couldn’t find, but I think he found it on his own. He sent a link to a page that sells used Lasers but also comprises a sort-of information archive: Laserdisc Database. It’s pretty comprehensive — I even found my weird Japanese laser of Major Dundee in there…

I certainly can’t play laserdiscs any more. I’ve kept fewer than a hundred, mainly if they’re not out on newer media, like The Wannsee Conference or because they have isolated music tracks, like When Worlds Collide. And also because of artwork I like, such as the old Tex Avery boxed set. Some offered for sale on the site might be desirable just for the artwork.

Michael included an even better link, to a YouTube encoding of the entire Criterion Laserdisc commentary for King Kong. Recorded by Ron Haver in 1984, it was the second laser commentary ever; Haver spends the first two minutes just explaining the new medium.

Ron Haver ran the film program at the Los Angeles County Museum of Art all through the 1970s, becoming something of a legendary figure. We went to the (recently demolished) Bing Theater countless times to see great screenings of original studio prints… students were charged a dollar. Haver’s presentations made one feel privileged to be there, and during his introductions he’d frequently bring incredible surprise guests on stage — James Stewart, Gene Kelly & Jean Hagen, etc.. I once got to shake the hand of Mose Harper himself, Hank Worden.  Haver published several impressive film books as well, collectors’ items.