First, a request for correspondents to check their email addresses for CineSavant: please use my cinesavant@gmail.com email address going forward … I’m missing mail from the old ‘dvdsavant’ email, and am not checking it remotely as often as I once did.

↑  Next up, I’m hoping to snag a screener for Arrow’s offering of Giants and Toys, a fairly amazing late ’50s Japanese film that blew me away twenty years ago on DVD. Its savage satire on the crazy advertising world and the impossible burdens placed on employees to keep a job makes the Japanese filmmaker Yasuzo Masumura seem way ahead of his time, and way ahead of us in terms of satirical accuracy. The chaotic graphic style also looks like an American show ten or twenty years in the future. I’m eager to review! 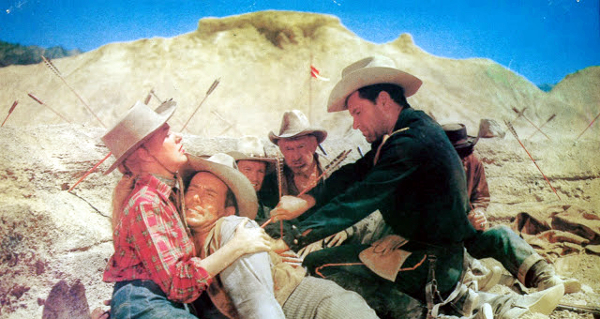 A book reference last week told me that the ‘arrow volley’ scene in John Sturges’ Escape from Fort Bravo was filmed in New Mexico. Correspondent Mike DelGaudio wrote in to correct me and the book, with proof that the scene was filmed in Death Valley, along with those other scenes clearly obtained at Zabriskie Point. Here’s what Mike had to say:

Hi Glenn … I just wanted to let you know that the arrow volley in Fort Bravo was filmed off the Artist Point road in Death Valley. Believe it or not, the depression our heroes hide in is still there! I can’t take credit for finding it, that would be my buddy Eddie Henn. Although we graduated from the same high school (’61 & ’70) here on Long Island, NY, I met first him in the Thugee Temple Pocket of Lone Pine about 2005 or so. Eddie is an unbelievable location hound who spends his retirement traveling to locations of films as varied as Northwest Passage and The Flim Flam Man.

I offer a then-and-now photo comparison; the first still ( ↑ ) is borrowed from John McElwee at Greenbriar Picture Shows. The second ( ↓ ) is a picture I took about 10 years ago.

The scenes where William Holden is leading the cavalry past the giant rock walls were filmed near Gallup in New Mexico. I think Rocky Mountain with Errol Flynn used the same area. Stay healthy and thanks for the fun reviews! — Mike 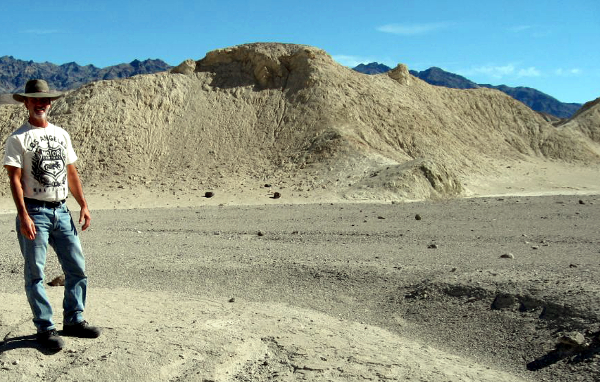