First up, maybe there are better copies floating about but I was blown away by this web encoding of the once- hard to find Tonite Let’s All Make Love in London, Peter Whitehead’s mod snapshot of the swingin’ scene around a 1967 Rolling Stones concert. I didn’t realize that it was a full hour in duration; back in High School we saw a much shorter digest version, in an evening of experimental films screened at UC Riverside.

In our (relatively) Podunk town we kids were crazy about anything English. They had the Beatles and James Bond and Hammer Films. My girlfriends wanted to look just like the models with their straight hair and light-colored lipstick. An exchange student from England was immediately popular.

The scattershot docu is all over the place. This must have been where I picked up the term ‘Dollygirl’ — a young woman interviewed actually calls herself that. The interviews with actors and artists and in-crowd types are full of vague, self-congratulatory talk about freedom and entitlement as part of an exciting (and profitable) movement. Compared to the ramblings of our Woodstock-era U.S. hippies, the quotable speeches here are not as innocent but sometimes almost as wince-inducing … I once thought this was all beyond cool. Everybody wants to make this scene — Eric Burdon, Michael Caine, David Hockney, Julie Christie, Polanski and Tate, various Rolling Stones, Allen Ginsberg. Jim Brown seems to have cruised in from the set of The Dirty Dozen and Lee Marvin is interviewed in costume.

The interviews vary wildly. Mick Jagger drifts, yet hits upon the observation that he’s playing to the first generation of young people that have money to spend. The charming Julie Christie notes that all the attention on London is good for her and good for the country. Michael Caine candidly states that ‘the scene’ is mainly about sex; in those years he ran his love life more or less like a kid in a candy store. Allen Ginsberg reads the bit of poetry containing the title, which to a 17 year-old sounds like the best suggestion ever made — the whole idea has always been to Live For Now. A couple of the artists come off as self-absorbed opportunists, just as pompous as the rich folk we see watching the changing of the guard. The regulation body painting sequence is dated, but typical of the campaign to make London seem sexier, yet still artistic.

The only celeb to really lay an egg is Vanessa Redgrave. Her political statement about Cuba comes with the worst-ever rendition of Guantanamera; you wouldn’t think she ever heard Spanish before, let alone met a Cuban. Elsewhere the music is choice: Pink Floyd and The Stones. Mick Jagger’s performance footage is barely more than a series of attacks by fans rushing the stage. Bouncers wrestle them to the floor and toss them bodily back into the audience. As with the less successful Wonderwall the soundtrack album sold long after the movie ceased to circulate.

Tonite Let’s All Make Love in London may be flaky at times, but it’s one of the best documents of a year when England was ground zero for youth culture, art, and sexual liberation. When I saw a short version in 1970, I thought it the coolest thing on the planet. It looks as if the upscale celebs that made the scene had a lot of fun — recent Michael Caine interviews show him both amused and grateful for his ‘wild years.’ Has anybody found a long web encoding of Tonite without Japanese subtitles? 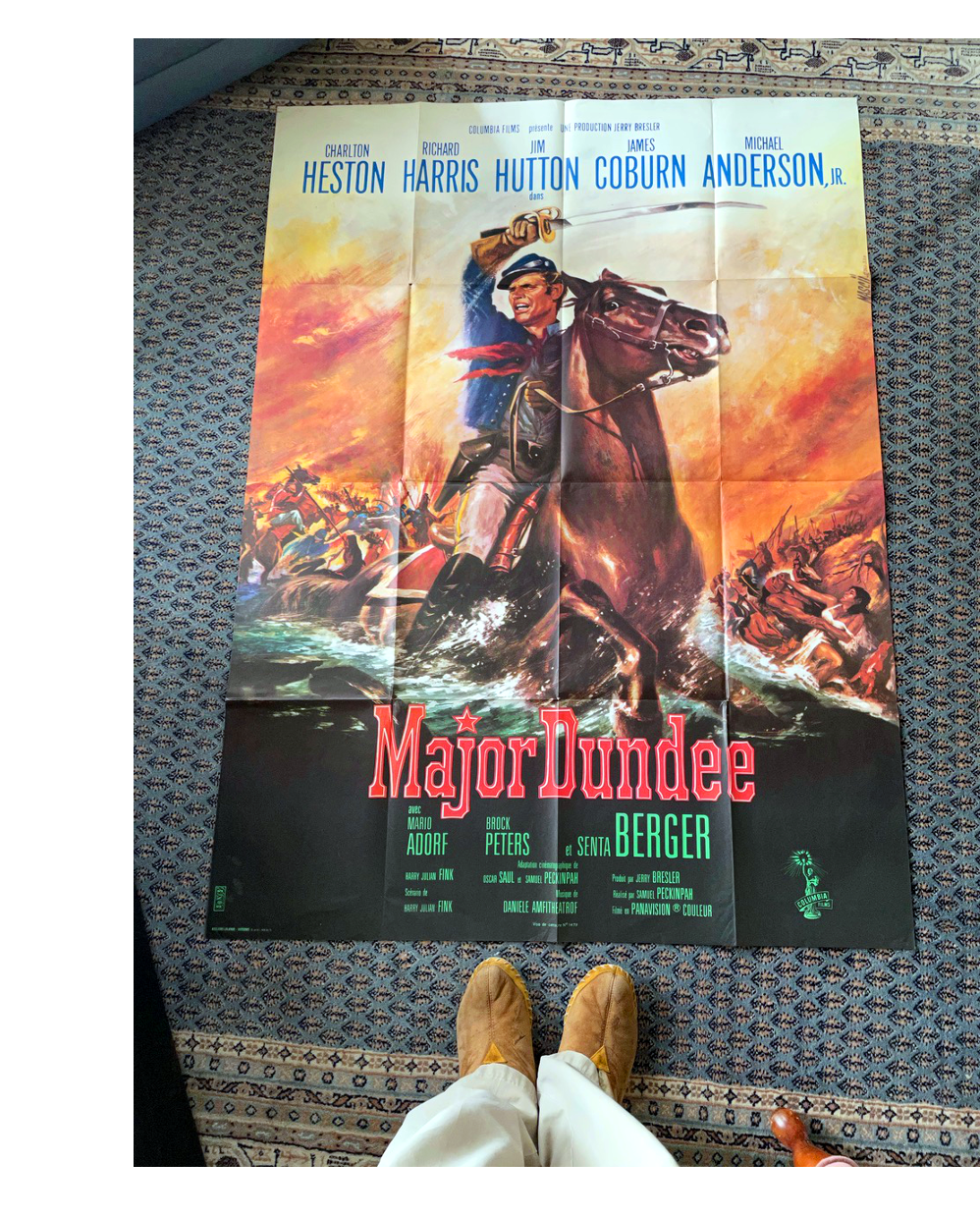 And Thursday was a happy day for me… cleaning out the attic, I prepared to throw away what looked like some random pieces of cardboard. Literally five steps from the trash bin in the street, I just happened to see that one thick piece of cardboard had Michael Arick’s name on it… and stopped and poked around a bit more.

Sure enough, the ‘random’ cardboard was the folder that my oversized French poster for Major Dundee came in when Mike bought it for me in 2002 — I had no Ebay account, and he did. The folded poster was inside. I had lost track of it maybe seven years ago, and I just came that close to throwing it away. Thought #1: pretty darn lucky. Thought #2: THINK before you toss stuff, fool !

I included my feet in the photo to give a better idea of the poster’s size: 39″ by 55″. Looking at it now, I’m intrigued by the credits. American posters for Dundee don’t have mega-star Charlton Heston’s name above the title, which is unthinkable for 1965 unless one knows that Heston rebated his salary for the movie back to Columbia Pictures, and made the movie for no pay. Maybe that ‘gesture’ triggered a clause that demoted his billing to the same level as the other actors. This French poster puts a bunch of names above the title, surely for design purposes. But the ones the French chose to leave below, and smaller, are the film’s one black actor and the two German actors. Hmmm.

Anyway I thought it useful to proclaim both how lucky and how foolish I was…. while showing off. I’m not a big poster collector but most of what I have is very important to me.

Finally, from the heartland comes a vital public service announcement from Bill Shaffer, who helps run the Kansas Silent Film Festival.  Bill also runs a yearly Godzilla and Friends festival, a fun movie marathon that every Spring draws children from the Topeka area. This year the festival is online, so all of us can see the lead-ins to the films, the special presentations, etc.. It’s not as much fun as being there with a lot of joyous ten year-old Godzilla fans, but maybe next year it will come back as a live event. If you’re curious, check out the full list of attractions at The Kansas Film Festival Page. It’s non-synchronic — you can watch any event at any time between Friday May 7 and Monday May 17.