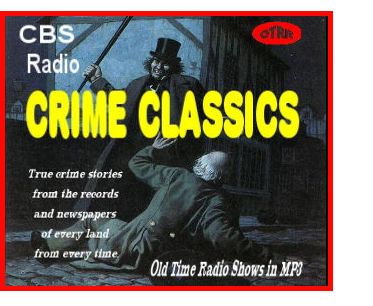 Whenever I want to start a discussion with readers, all I have to to is mention the magic name of composer Bernard Herrmann. Following up on my post last Saturday, correspondent Kit McFarlane has generously written in with two more highly interesting links. This Internet Archive page called CBS Radio Crime Classics allows one to audit a dozen or so half-hour TV shows with soundtrack scores by Herrmann. The one I listened to was very entertaining.

Kit follows up with a link to his Pop Matters article that’s mostly about the Crime Classics radio shows, The Seven-Layered Arsenic Cake of Madame Lafarge and other Crime Classics.  I didn’t know about any of this Kit, thank you.

We really enjoyed some of the restored films shown last weekend at the TCMFest, held online for the second year in a row. A beautiful new copy of the French Josephine Baker musical Princesse Tam-Tam (1935) will happily replace the ragged remnant that’s been shown for years. We also greatly enjoyed the early Tay Garnett / Helen Twelvetrees drama Her Man, which was made in 1930 but has technical and artistic qualities (a complex soundtrack, impressive tracking shots) that critics often ascribe to later ‘auteurs.’ Some of the knockabout slapstick comedy is really good.

Sneaking into the mix was an obscure 1951 ‘social problem’ picture that I frankly had never heard of, despite the fact that it was directed by the famed Robert Siodmak. The Whistle at Eaton Falls stars Lloyd Bridges and Dorothy Gish, and sports amazing early film work by Anne Francis, Ernest Borgnine, Arthur O’Connell, Carleton Carpenter, Murray Hamilton and James Westerfield, most of whom look years younger than we are used to seeing them. The show was so good that I yesterday obtained a phone interview with David Strohmaier, who restored it, and am working up a part-review article.

Eaton Falls is about a labor struggle in a New England plastics factory. It grabbed me because 1) of its unusual high quality, 2) because it all but dropped off the face of the Earth after its initial run, and 3) because it feels like one of those pessimistic ‘America isn’t working right’ movies of the time — yet it pays off quite differently. It’s especially impressive because its reasonably positive finish doesn’t negate its complexities — it doesn’t end with a phony Frank Capra reconciliation. The fact that movies like this drop in out of nowhere, is a great motivator to stay around to see what might be next.