First up today from Dick Dinman is a new DVD Classics Corner On the Air discussion of the 3-D Wings of the Hawk with author Jeremy Arnold; they get into the film and the 3-D process as well as director Budd Boetticher and the star Julia Adams. CineSavant’s Blu-ray review from January 26 is here.

But wait, there’s more. From the same source, a link to a 43-second promo for La maschera del Demonio, from May of 1960. Mariano pointed out that it includes a close-up of Barbara Steele’s stand-in lying on the slab in the crypt. It fooled me for a second.

And this Archivo Luce link is a collection of stills showing the brutal working conditions on the set of the horror film The Vampire and the Ballerina. It’s 48 behind the scenes images from December of 1959 called Fondo Vedo / Momenti della lavorazione del film L’Amante del Vampiro. Wait, they’re all glamour photos of Heléne Remy, Ombretta Ostenda and Tina Gloriani. Who would have thought that an Italian movie promotion would concentrate on sexy actresses? 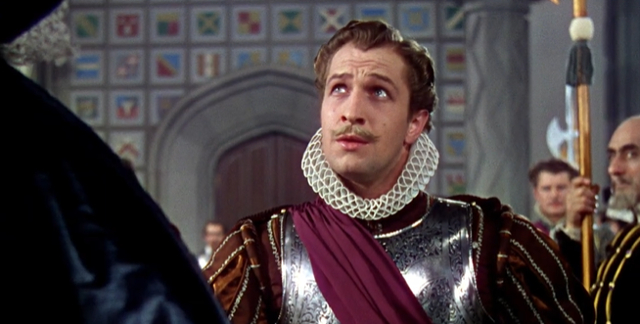 The suggested list, all of which are said to be scanned in 4K, is as follows: Jane Powell and the Mr. Universe winners in the musical Athena (1954); Frank Sinatra and Debbie Reynolds in The Tender Trap (1955); the Bob Hope comedy Bachelor in Paradise (1961), Gregory Peck and Jane Wyman in The Yearling (1946), William Holden and Eleanor Parker in Escape from Fort Bravo (1953), the Bette Davis / Errol Flynn Technicolor classic The Private Lives of Elizabeth and Essex (1939, with Vincent Price ↑ ), Cary Grant and Myrna Loy in Mr. Blandings Builds his Dream House (1948), and the Jackie Chan Drunken Master II (1994) in Cantonese, Mandarin and English.

More welcome Warner Archive news for fans of film noir is a restored They Won’t Believe Me (1947) with Robert Young, Susan Hayward, Jane Greer and Rita Johnson. As hinted at earlier here at CineSavant, it’s the full 95-minute original cut — for reissue it was slashed by a full fifteen minutes, and most of us have never seen the full show.TCM’s Noir Alley showed They Won’t Believe Me a few months back, and it was the expected short version. The WAC earlier rescued the longer original cuts of both The Thing from Another World and Rachel and the Stranger, each time making big news.

Like I said, none of these have been officially announced; we’re expecting some news on that early next week. They seem to be fairly firm but none are up for order yet… and there are enough titles here to keep the schedule going for months.