These images enlarge when opened in a new window.
Hello!

I know you’ve come here for the latest semi-recent news about new Blu-ray discs, restorations, old gossip, etc… but it’s desperation time I was inspired by my jaunt into the CineSavant Attic of Doom the other day, the one where I found the old Apocalypse Now program. I’ve been answering mail and having fun discussing that for more than two weeks now. So as a further demonstration of unrestrained self-interest look in at the world of not-so-impressive collecting, here’s a random assortment of goodies that I’ve kept for upwards 55 years. I’m too shy to splatter this stuff all over Facebook, so why do I post it here?  Only my analyst knows.

Everything was found in one dusty box. Above, from left to right we start with some Swedish money. Being ignorant, I Google-discovered that Sweden is in the European Union but hasn’t adopted the Euro yet. So I could be rich!  Next is my 1966 Mustang owner’s booklet, and it’s pretty grimy. My daughter has the car now; I’ll put it aside to give to her.   Then in two pieces is my original Draft Card issued in 1971. I didn’t tear it apart, it fell apart in my wallet.  Above and further right is one of those ‘Chick’ proselytizing comic books… being fascinated by propaganda, I tried to buy the whole set. I actually found my first on a bus stop bench… left there to spread the good word.  The Castle Films Box, which once held two minutes of wretched quality 8mm footage of the first Mercury launch, was found by my sister and mailed to me a few years back. I’ve got five or six original Castle boxes of monster movies … they had colorful covers.  And finally, one of my Editors’ Guild cards. Yes, I am an actual card carrying member of local 700. 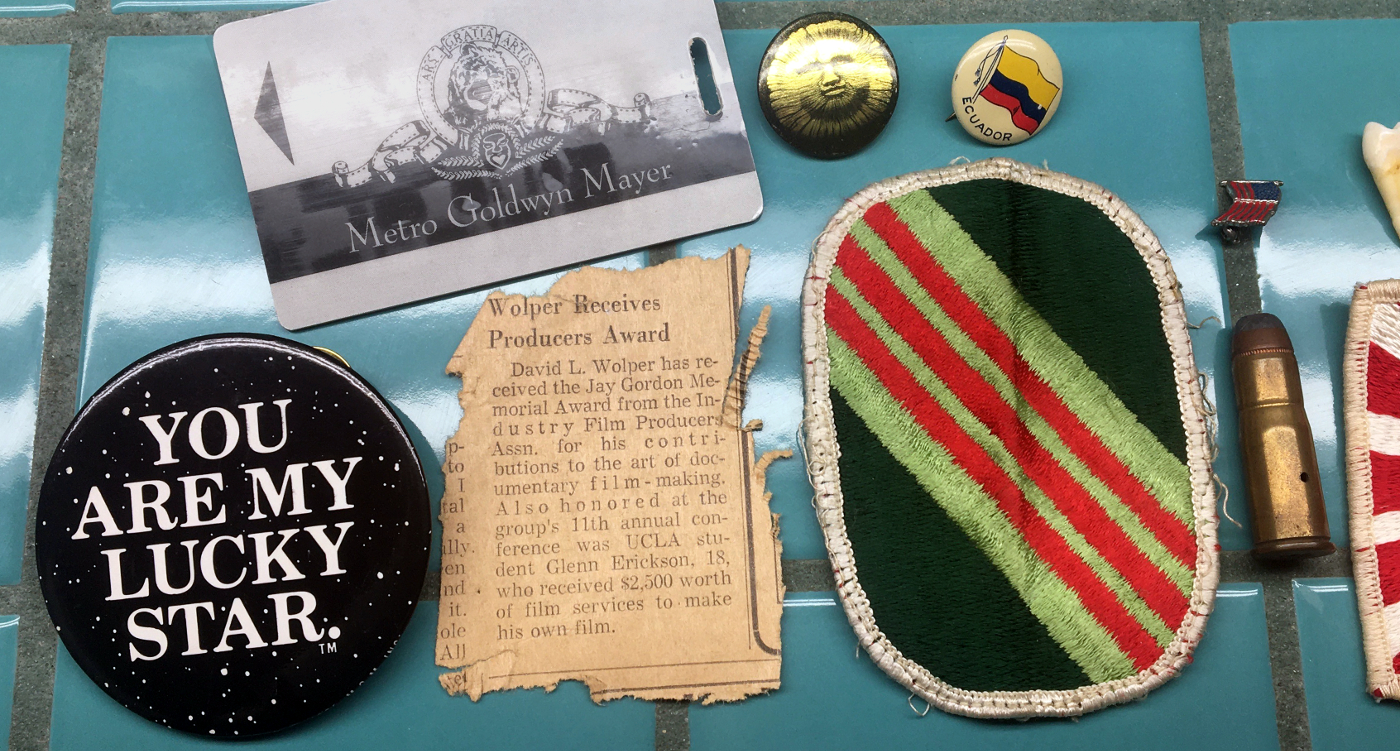 Just above is a grouping of items that are at least tangentially movie-related. The black ‘You Are My Lucky Star’ Button was handed out in Westwood on the first day of the 1979 release of Alien. Fox must have already passed on that promotional tagline in favor of ‘In Space No One Can Hear You Scream,’ and were just getting rid of thousands of buttons that some (likely pink-slipped) publicity flack had ordered.  Next just above is my MGM security entrance card, which I palmed instead of turned in when I left the company. Actual corporate employees were escorted out, the old cardboard box ritual. Since I was a Guild contractee, I was able to slip back in for several days to grab up all the personal stuff in my editing room, which I should never have allowed to pile up. Imagine my surprise when the damn card stopped working!  They probably kept a security file with photos of me leaving with cart after cart of books, etc.

Moving to the right and just below is a News Clipping from 1970 or so; I got an award arranged by Ray Ussery at the Air Force Film and Photo installation at Norton AFB (chronicled here). I think the award was window dressing for the real award given to the great David L. Wolper. I have a photo of me being congratulated by Wolper but it’s so hideous it will remain under wraps. Most of the $2500 ended up being for film services I could never use, but the CFI Lab did indeed honor some promised credit there four years later.   Next over, the two little buttons on top. The second is just a memento of Ecuador, but the first is a Promo Button for the brief reissue of The Wicker Man around 1978. They organized the ad campaign around the pagan sun god. Nice little item, but just as with the Alien button, nobody could tell what it refers to.  The big green and red insignia shoulder patch was given to me by John Milius on 1941; he told us they were the Official Special Forces Patch designed for Apocalypse Now. Modelmaker Ken Swenson wore his but I didn’t have an appropriate jacket to put mine on. I never remember to look for the patch in the movie — maybe it was only something the movie crew wore.

The rubbish priceless mementos continue in the photo below.   The Bullet is a dummy, one of many that came in a leather ‘bandido’ style bullet belt that a girlfriend bought at the MGM Auction. The hole drilled in it was apparently to let crew people know it wasn’t real. The colorful Rising Sun Patch is of course from the movie 1941: I don’t know if a Japanese person would have found it offensive, then or now.   The Four Teeth were pulled all at once in 1972 by an Air Force doctor. As a starving student, I got onto Norton AFB with my expired parking pass and presented a note from my dentist spelling out the oral surgery I needed. The young military doctor noted I was 21 years old and no longer qualified for dependent military medical care. I stood up, but he said, ‘Can’t you take a joke? Sit down, kid.’ In about five minutes he yanked them all out like I never knew what hit me. God Bless the Air Force…  The Last Button is of course from the Cannon film with Dolph Lundgren.  And the Team Banzai Sticker is indeed from The Adventures of Buckaroo Banzai. I think production personnel put them on their cars or something; I found a stack of them in editorial boxes of daily outs that I went through while working on the DVD release. 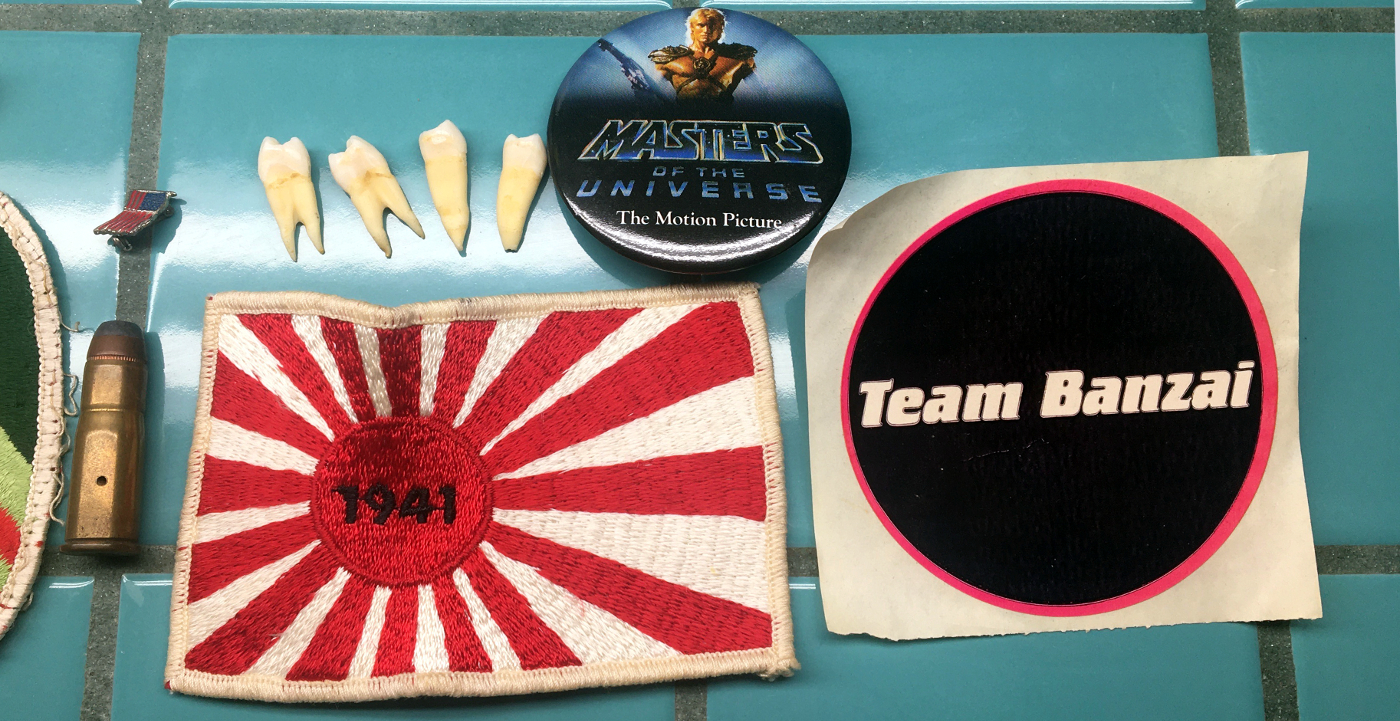 And finally I know you need to know everything about the famous Panama Hats, which are actually made in Ecuador. Relatives sent me two over time … the really fine and fancy high grade ones come unfinished and rolled up in balsa wood boxes like this. On 1941 costumer Ed Wynigear referred me to these two marvelous little men who worked way up in the loft in Western Costume on Melrose (long gone). They blocked it for me; in 1979 I couldn’t find anyone anywhere else who still knew how to block a hat. Very stylish!  The box says ‘Sombreros Finos Montecristi.’

But Wait — a real CineSavant column item did come in, thanks to friend Craig Reardon. On last week’s review for The Flame Barrier I asserted that the famous effects makeup man Dick Smith is consistently credited for a number of films he didn’t work on, where special mold appliance work was actually done by another, older makeup specialist with the same name, Dick or Richard Smith.  Craig found the proof in this page from a 1959 magazine. It looks like Famous Monsters to me.

The article even verifies that this 20th Fox-based Dick Smith worked for Ben Nye, on The Fly (1958) and The Alligator People (1959).  Yes, CineSavant is the place for meaningful information we all need to better navigate our daily lives.

(All images on this page enlarge when opened in a new window.) 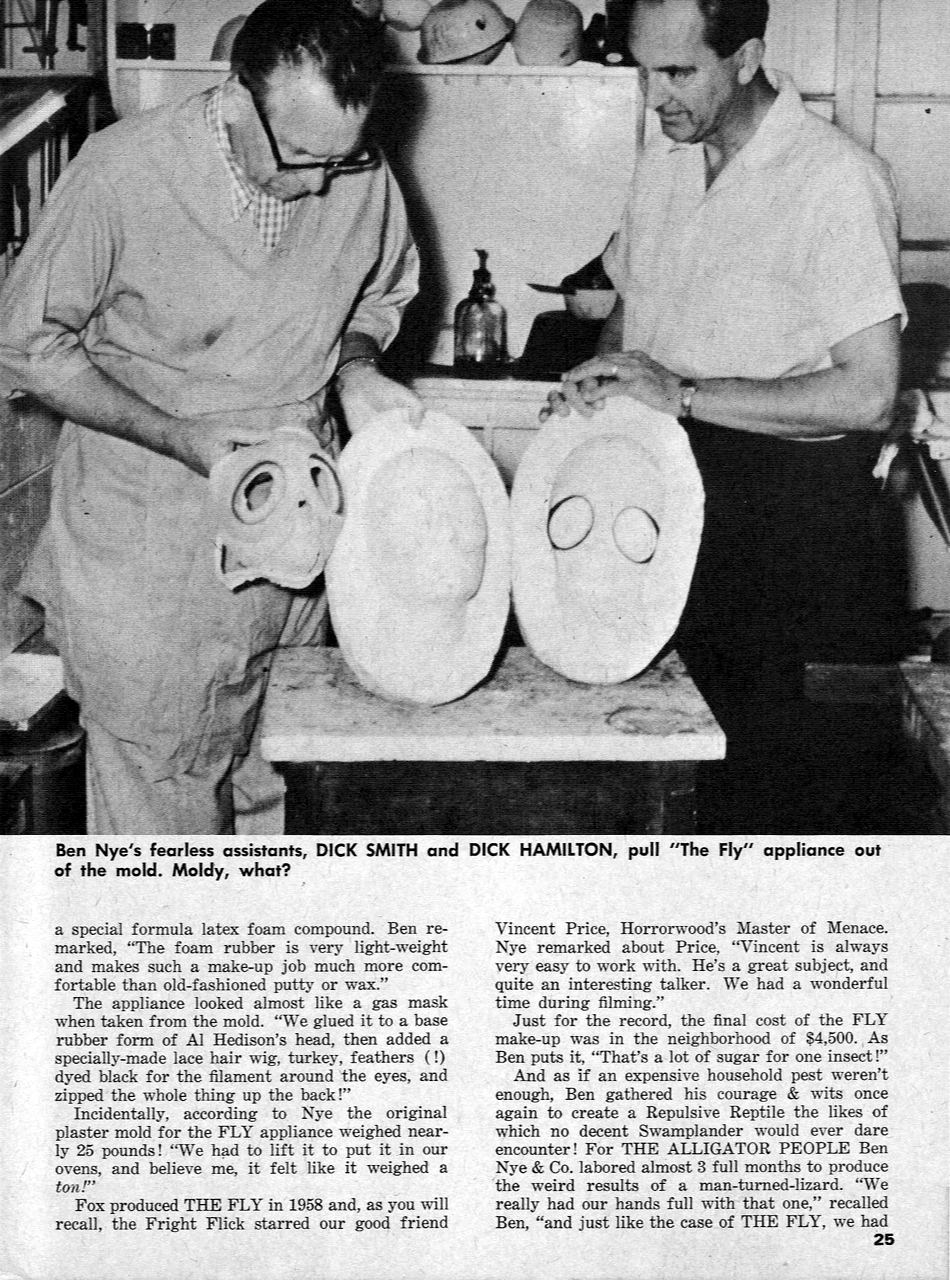