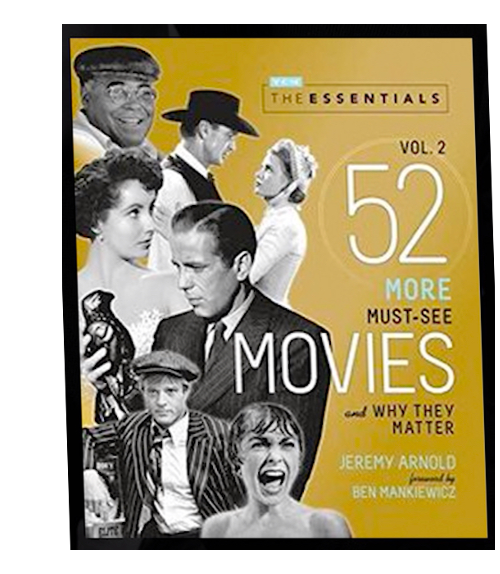 Exciting discs to review today — and a new batch of discs came in so I can predict even more enthusiastic reviews up for the next few weeks.

→  This go-round we’ve got the equivalent of a book review via Dick Dinman’s DVD Classics Corner on the Air: Dick interviews author Jeremy Arnold about his latest Turner Classic Movies book TCM The Essentials Volume 2 — 52 More Must-See Movies and Why They Matter. No, they don’t run through the entire index but pick three movies each to discuss.

Colleague Jeremy Arnold just marked a COVID milestone on Facebook — last Friday March 6 was the one-year anniversary of ‘the night that everything shut down’ for him… and coincidentally me too. I also attended the first night of the NOIR CITY festival on March 6 2020, to see a pair of Argentinian noirs. The car radio on the way to the Egyptian Theater was already talking about the exploding infection rate, and simple habit kept us from turning back (our nights out are not frequent during the community college semester).

My wife and I hadn’t been in a big crowd in a while, and Noir City at the Egyptian is always a socially-fun mob scene. The psychological undertow that night was powerful: amid all those people, the theater suddenly felt like Germ City. When the break came we didn’t even stop for a drink, but instead went straight home…

… and like most everybody else that could, stayed home for this full year.

Just like Jeremy we haven’t been to a movie since, as is the case with most of the rest of the country. We’re fortunate in that for us relative isolation is practical — we both have work that can be done from home. Almost no in-person meetings for a full year. Last month I recorded a joint commentary remotely, with one participant in a studio and myself on a Zoom call. I most often ran into Jeremy at the Academy’s Margaret Herrick research library, which is now closed. No more commentaries for me until it reopens.

I once thought my parents had seen everything, that I’d never live through the world-altering disasters they had. Who would have predicted that I’d spend an entire year living like a gopher in the Erickson Burrow, watching these cascading health and political disasters unfold?  Yep, let’s hope that this time next year we’ll be wearing masks out of courtesy instead of fear, and that we’ll be seeing our loved ones in person again.

Stop worrying, because MGM has a new animated logo. I’m sure you’ve been waiting for this day as impatiently as I have, and it’s now up on YouTube. I’m told that, yes indeed, the lion is not CGI generated, which doesn’t mean that Leo hasn’t been put through a digital Cuisinart twenty or thirty times. You’ll also be happy to know that MGM has finally made Leo logo-friendly for viewers not educated in the classics: the age old motto is now translated.

Back at The Cannon Group promo director Liz Beckman designed a great jacket logo for our fearless Cannon Trailer Department, a parody of the MGM Logo with a slightly different motto: “Ars Gratia Pecunae.”   Look it up, Pilgrim!