A book review today, for a new Film Noir tome that I enjoyed very much: Film Noir Prototypes: Origins of the Movement. It’s yet another book on noir edited by Alain Silver and James Ursini, part of the group that put together the first influential English- language reference on noir in 1979, Film Noir The Encyclopedia. That earlier volume is still the place to start for serious noir study, but the refreshing concept of the new Prototypes book improves on many of the noir readers and essay collections that followed. The earliest French authors and Paul Schrader tried to nail down a firm definition of Noir, starting with the question of whether it’s a genre, a style or a movement with specific parameters. The new Prototypes book analyzes the actual sources credited with forming noir, comparing them to films in the noir mainstream and adding plenty of visuals to make the comparisons concrete.

If that sounds too academic, the book itself is not. The various new articles and reprints naturally start with the style’s acknowledged debt to German expressionism. In fact, the handsome cover illustration is not from a Hollywood noir, but G.W. Pabst’s 1929 Die büchse der Pandora. Skipping down the chapter list, the subjects dealt with as sources for noir make for compelling reading: Victorian fiction, American painting (Edward Hopper!), Universal horror pictures, British Gaumont thrillers, Dostoevsky’s Crime and Punishment, Gangster classics, French films from the Occupation, Cornell Woolrich, Gothic thrillers, Social realism and tabloid journalism. The studies even rake the work of Cecil B. DeMille and John Ford for noir antecedents. The broad net pulls in a wealth of relevant trends, insights and proto-noir knowledge; a ‘familiar’ subject yields up some thoughtful new angles.

Besides Ursini and Silver, the compendium of articles includes work by Julie Grossman, Todd Erickson and the late and missed Robert G. Porfirio. His original essay on German Expressionism and noir starts the show. 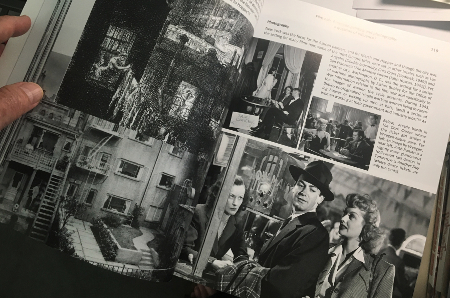 The Prototypes book is printed on heavy glossy paper, and the quality illustrations are beautifully reproduced, film stills and artwork alike. I skipped around, looking first at the chapters of greatest interest. I read most of them within a week, and only then the wrap-around essays. I found the book a useful antidote for noir studies that rehash the same fifty pictures and fifteen directors — the good authors tapped by the anthology bring new ideas to this still-interesting topic.

The Applause Books paperback went on sale on May 15.

Now, to get really serious, here’s a link from Gary Teetzel about favorite subject #38 here at CineSavant Central. Toho Kingdom has Nicholas Driscoll’s in-depth book review of a Japanese Godzilla Manga from the 1950s. The elaborate graphic novel covers the adventures of two Godzillas, parent and child. And yes, it does appear to be for kids.

Of course, Gary always tops me . . . I thought this business sign for a local llanteria on Virgil St. in Los Angeles was kind of cute. When the shop is open, various stuffed Kaiju toys hang in the shop door!

And one more link has slipped in at the last minute — it’s a very good one — Joe Dante is circulating a Paleofuture article by Matt Novak about the criminalization of film collectors, How 1960s Film Pirates Sold Movies Before the FBI Came Knocking. This Mr. Woody Wise must be the fellow I bought my 16mm print of It’s a Wonderful Life from in 1978. That was a real Christmas treat for several years. . . thanks, Woody!