It’s a post- Labor Day CineSavant special! Um, if anything can be called special around here — . Maybe I’ve been seeing too many movies, but when correspondent ‘B’ sent me some Labor Day themed Ernie Bushmiller ‘Nancy’ cartoons, one stuck out for a screwy reason: it reminded me of Antonioni’s existential bear trap L’Eclisse, mainly the ending where the characters exit the scene for a frustrating / intriguing slow montage of landscape details around a certain Roman intersection, halfway out in the sticks. I’ve always loved Bushmiller’s style for Nancy, especially the backgrounds. Everything is just-so, tamed, in control. Those backgrounds now fascinate me, and in this little strip they’re suddenly front and center.

Just think of your favorite TV show that has recurring locations… and then imagine a spacey montage round-up of ’empty set’ images, with the characters you love missing, mysteriously absent. Georges Franju did something like that for his ultra-creepy trailer for Eyes Without a Face, using shots just as the actor is leaving the frame, etc.. That’s a great tagline idea: “We can’t show you the horrors… but we can show you where they just happened.”

Then, correspondent Bill Migicovsky forwards this article from a few months back that I’m ashamed to say confirms my suspicions about a famous actor. It’s pretty funny: Rex Harrison – His Greatest Hits by Graham McCann. It’s the man that even nice people want to punch out!  How to Lose Friends and Infuriate People! 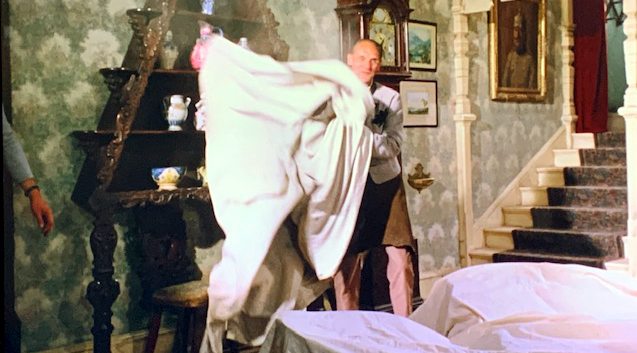 Last week Joe Dante amused his audience by pointing out an errant crewman in the middle of of a shot in the Universal programmer Horror Island, a revelation which rhymes with the discovery by correspondent Gary Teetzel of a similar surprise crew-person cameo in the new Blu-ray of the Hammer The Kiss of the Vampire:

“In Kiss of the Vampire no one is supposedly staying at the hotel other than the newlyweds. So off on the far left, at what appears to be the edge of the set… whose arm is that with the suspiciously modern wristwatch?

My other thought while seeing this is that I’d like to see a version of Kiss of the Vampire that stars John Cleese as Basil Fawlty. The innkeeper can be forever losing his temper because vampires have ruined his business. — Gary

Thanks Gary, and thanks for reading! — Glenn Erickson