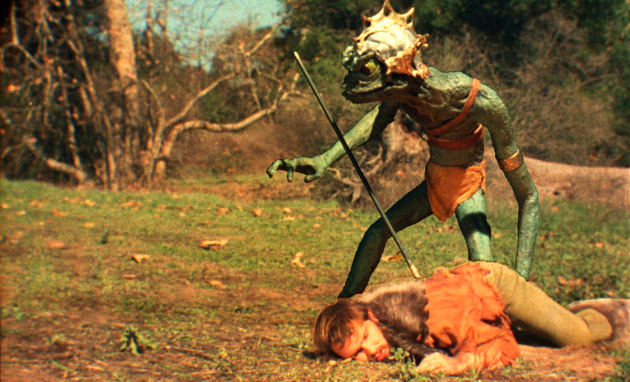 I’ve been wondering on and off about the long-gestating film project The Primevals, which was the subject of a big-deal Cinefantastique article back in 1978. I knew a lot of the crew who were working on its pre- pre-production, slipping away from their duties on 1941 to work nights at Dave Allen’s studio on Olive Avenue in Burbank. It was so long ago.. I think the shop took a break from Primevals to create the effects for The Day Time Ended. At that point things came to a halt, and the project stayed dormant until the early 1990s. Dave Allen eventually went overseas to shoot the live-action, and then … the company making the show just pulled the plug. Allen protégé and career animator Chris Endicott has been working on it ever since, one shot at a time. Since the editor for the show Steve Nielson is an old friend, I heard stories about clever low-tech effects solutions to avoid expensive optical work. Mr. Endicott allowed me to visit his setup around 2010, at which time I was shown a couple of sequences and learned that they had gathered up the 1995 film elements and were working on the show again. Now it looks like The Primevals is really going to be released this year in one form or another.

The Primevals IMDB page still doesn’t say that it stars Juliet Mills; I also noticed that the late Robert Cornthwaite makes an appearance. This closed Indiegogo page was a promotional effort for the show. And not long ago they came up with a nicely-produced, amusingly over-hyped promotional trailer. ‘Fifty years in the making’ — and the trailer still shows somebody yelling, “We gotta get out of here!”

The image above, through Paul Gentry, was of a test done in the very early 1970s, when the show was a partnership between David Allen and friends Dennis Muren and Bill Stromberg. I’m told that the dead man on the ground is Bill Stromberg. Was he playing a Viking? I forget. They lived in little houses on stilts, that looked pretty good. A draft of the script I read long, long ago, which had been worked over by Randall William Cook, made the show into a combo of Quatermass and the Pit and Lost Horizon. Randy penned impressive artwork of some of the monster confrontations, at least one of which went into that Cinefantastique issue dedicated entirely to a show that was still on the drawing boards (but already had a lot of miniature sets and animation models prepared). When we saw this particular photo much earlier, in a Cinefantastique or a Photon magazine, we were ready to see the show right away. Perhaps Chris Endicott will eventually tell the entire stop-and-start story of The Primevals’ production.

I still believe in the Post Office, our U.S. Postal Service. For me, the service has gotten better since the 1980s. For me it’s been a rare exception when something is late or (maybe) lost.

What with changes lately (from Washington?) I would expect our Post Office to be in revolt. How would you like it if you did a job that could only be accomplished with overtime — and they outlawed overtime and expected you to keep up?  It isn’t unusual for our local mail carriers to be delivering after dark this month… I feel like giving them a tip.

I’ve always heard griping but my experience has been good. I’ve sent dozens of packages library rate and first class in the last five years, and only one has ever been delayed … by maybe three or four days. We watched it on Internet tracking, making a loop around the country before reaching its destination.

My ‘delay’ story has a happy ending, more or less. I still get special discs for review sent to me from another site I once reviewed for. In the last week of July I was told that the new Blu-ray for Airplane! was on the way. Although the point of origin is just on the other side of Los Angeles, it took 29 days to get here, with me late on the requested review and asking not to be barred from the site. The package bore a good address for CineSavant Central.

So I will eventually have a review up here for Airplane!, but over six weeks after its street date back in July.

For my money, the USPS is a National necessity and I don’t care if it operates in the red. We don’t expect the Pentagon to make a profit, and to hell with people that want to privatize everything.