By now I think most Welles fans know about it, but last Tuesday Gary Teetzel advanced us a link to Orson Welles à la Cinémathèque française, a frequently hilarious 90-minute interview and Q&A session with film students, from 1983 when Welles had been awarded the Légion d’honneur from President François Mitterrand. Lionized in Paris, Welles couldn’t get arrested in the film biz, even after outliving most of the moguls that did their best to put him under. The interviewer is Henri Béhar; Welles is obviously in fine humor. If you can’t watch the whole thing, watch long enough to see Welles COMMAND a 16mm cameraman to back off… not only does he throw a shadow over the aging enfant terrible, he’s just too damn close. 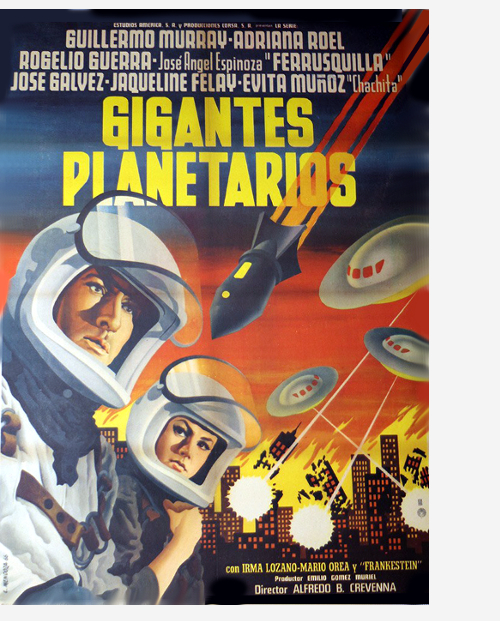 ← Next up, for special fans of Psychotronic Mexican cinema, a John Crummett facebook entry leads us to a YouTube post of the 1965 Spanish-language sci-fi chiller Gigantes Planetarios, which for you Spanish speakers will be a fun ride. Vintage Mexican filmmaking is always diverting — the sci-fi pictures I’ve seen with aliens and spaceships have previously all been (wonderfully) silly comedies… wait wait, this thing only starts out on the serious side. It’s a comedy as well.

Since it’s not in English, I’ll add that the Hardy Encyclopedia of Sci-Fi pegs ‘Planetary Giants’ as a juvenile space show with regulation equipment: one hero, one scientist with a spaceship (which looks like an amusement park ride) and one sexy daughter. Responding to a rash of international disasters and sabotage (we see one African native disintegrated) they fly to the ‘Planet of Eternal Night’ in the galaxy of Rumania (?) to contend with a civilization just like ancient Rome. Stowaways include a boxer and his comic sidekick (Ferrusquilla), who get cozy with some alien babes. The only problem is an alien Despot With A Death Ray (officially, DWADR). It’s psychotronic, all right, especially the wince-worthy costumes.

Don’t expect to see anything as spectacular as the poster — but the opening couple of minutes are amusing. I know it’s a tiny graphic … open it in a new window and it will become full-sized. 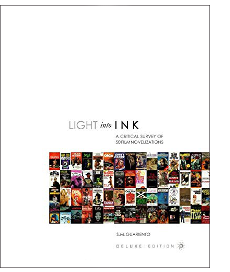 And to top off this day of uneasy lockdown, I have a Book Review of an impressive discovery: an exhaustive, well-written and annotated study of film novelizations — the (mostly) pocketbook tie-in for movie releases, both to promote them and maximize profits. They were everywhere when I was young, and for all kinds of pictures.

The Deluxe Edition from Ideogram Press of Light into Ink: A Critical Survey of 50 Film Novelizations turns my thinking around 180 degrees… author-researcher S.M. Guariento has broken ground on a fresh topic and done it justice. The text dives right into the subject, paying no need to the fact that many novelizations are fast-buck items sometimes spun out by hack writers. Guariento’s title says fifty novelizations but his 480 authoritative, entertaining pages cover hundreds more movies that were converted into reader bait for the drugstore racks. All the collectable oddities are covered, even those strange tie-in versions of Gorgo and Reptilicus that added laughable sex scenes. We’re still disturbed by mental images of Peter Cushing lusting after schoolgirls in Brides of Dracula.

But Light into Ink qualifies as an art book as well — it is illustrated with hundreds of color reproductions of vintage paperback covers, in many cases, multiple covers for popular novelizations. I know a couple of collectors that would consider this volume something of a Bible on the subject.

The easy-reading but academic-level annotated text does much more than give an overview. The author analyzes his fifty focus titles in great detail, explaining why novelizations vary so much from their accompanying films. In most cases the book is written before the movie is released, and the author must work from an early script draft. Guariento covers specialists in the form, but also charts unusual situations, at least one in which the original story author, who had nothing to do with the movie script, is brought back to do a novelization. He essentially got to ‘direct’ his version of the story.

A full range of films and genres is represented — pulp thrill items and even European art pix, where Marguerite Duras and Alain Robbe-Grillet wrote book versions of their movies for the news stands. Annie Carlisle’s novelization for Liquid Sky, which she only starred in, is described as autobiographical in nature. We’re told that the authors of the tie-ins for Forbidden Planet and Mad Max used an epistolary format.

The text of Light into Ink isn’t padded. All of the facts in the previous paragraph came from page 43 and 44. I was hooked by the book only a few pages in, when Guariento broke the ‘Information Barrier’ on the mysterious horror movie Blood and Roses. He says that the published novelization follows the feature closely, and includes the rumored blob vampire-monster in the heavily-edited dream sequence, that now exists only in a couple of tantalizing photos. Guess who is going to be trying to track down an elusive, 60 year-old pocketbook?  Until now all I collected were different editions of Day of the Triffids.

For movie fans wanting more there’s a revelation to be had on every page. Light into Ink puts photo-faces on scores of unheralded novelization writers. Frankly, after reading some novelizations I wondered if the writer slammed out his words behind an alias, holding his nose as he typed. That’s how I felt when I first read the paperback edition of Major Dundee which Harry Julian Fink adapted from his treatment, and presumably his unused screenplay. It’s a shapeless mess, plain and simple.

The fifty films given individual chapter attention are an eclectic bunch, from horror pix by Carpenter and Cronenberg to Leone’s spaghetti westerns to things like The Day the Earth Caught Fire. In comparing images to ink we learn more than a little about both, as the novelizations illuminate different elements, or follow a different path than the film entirely. Guariento’s dedication to detail digs deep into foreign version research for the pocketbook adaptations of a number of Giallo classics.

The book gravitates toward films that might be difficult to adapt to print: a section called ‘Dangerous Visions’ covers films as diverse as “X”, Performance, Zardoz, Phase IV, Sorcerer and Harlequin. Extensive quotes make the case that the novelization for ‘X” betters the movie in visualizing Dr. Xavier’s X-Ray visions. For the book tie-in for Taxi Driver we learn that author Richard Elman preferred to skip the descriptor ‘novelization’ in favor of the phrase ‘parallel reimagining of the screenplay.’ Author Guariento argues well that the writers of tie-in books are not necessarily hacks, you know, like the thuggish architect in The Fountainhead who growls out, “We wanna express our creativity too!”

I’ll now have to re-order my thinking away from the put-down of the Beatles song:

“It’s a thousand pages, give or take a few / I’ll be writing more in a week or two
I could make it longer if you like the style / I can change it ’round
And I wanna be a paperback writer / PAPERBACK WRITER!”

A second more affordable softbound version is available as a non-art book with monochrome illustrations: Light into Ink: A Critical Survey of 50 Film Novelizations Midnight Edition.