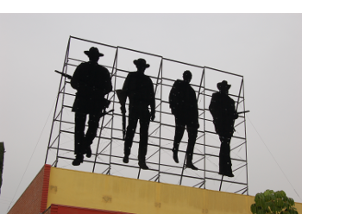 The giant artwork pictured above was one of several mounted atop buildings in Hollywood around 1999 (I think). They stayed up for the better part of ten years. This representation of Sam Peckinpah’s masterpiece was atop a long-gone post house called Laser Pacific on Cahuenga just north of Melrose, where I remember finishing my first feature promotional job done in Hi-Definition. A matching art construction up on Santa Monica Blvd. was just as instantly recognizable … it was the silhouette of Raquel Welch in her cavewoman pose from One Million Years B.C.. There were others that I may have seen only once or twice.

I took a new look at Toby Roan’s blog  50 Westerns From The 50s today… its sub-heading title is “Riding the long, dusty trail through ’50s Westerns.” Toby’s mini-reviews are fun to step through; I wish I could interest him in writing for CineSavant.

Toby is just the best for vintage western commentaries, as I’ve found out on A Man Alone and Night Passage; his input to the One-Eyed Jacks Blu-ray is also impressive. For some reason, Toby’s speaking voice is just perfect for commentaries — he doesn’t rush and he imparts a lot of useful information, without making himself out as a budding multi-media personality (although he ought to be).

About forty blog entries down, Toby makes a joke about a recent movie called Dora and the Lost City of Gold. I had to laugh … in 1958 my mother took me to the UA oater The Lone Ranger and the Lost City of Gold at the Edwards A.F.B. theater, and I loved the movie. At least, I loved it until one of the last scenes — when a thrown hatchet axes somebody in the back, and a woman screams.  Holy Peckinpah — I knew that really had to hurt. At age six it was my first taste of screen violence, and it marked me.

Oh, honest, I wrote up this plug for 50 Westerns From The ’50s before Toby entered his plug for the upcoming Via Vision disc of Major Dundee. That’s the truth, Scout’s honor.

Here’s something I liked. Eagle-eyed associate Gary Teetzel has a welcome habit of haunting trade magazines in search of items of interest about movies. He uncovered a trio of tell-tale clippings dating from early in the production of Alfred Hitchcock’s classic Vertigo.

Paramount listed From Amongst The Dead as an upcoming title in February of 1956, mentioning it in trade ads. Stewart was listed as the male lead by September of that year. He might have been signed earlier, as the Media History Digital Library’s collection for that period is a little spotty, missing issues of both Variety and The Hollywood Reporter). 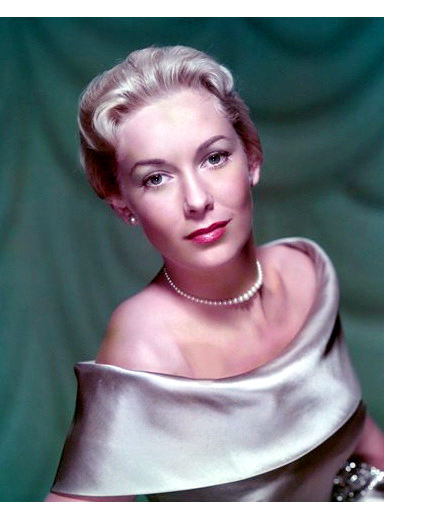 ‘From Amongst The Dead’ is of course a translation of the original Boileau-Narcejac novel entitled D’Entre Les Morts. Hitchcock reportedly snapped it up on the rebound from losing Boileau-Narcejac’s Les diaboliques to the French producer-director H.G. Clouzot.

In December, Paramount ran a trade ad listing Maxwell Anderson as the screenwriter and the promising actress Vera Miles as the female lead for Vertigo. A few still photos exist of Ms. Miles in character as the mysterious ‘Hitchcock Blonde’ Madaleine Elster ( ← ). The title From Amongst The Dead was acknowledged as possibly being only a place-holder:

Gary found two other informative tidbits about Vertigo’s title, and a key piece of re-casting.

Just recently a minor ghost-spiritualist tale had been released under the name Back from the Dead; perhaps From Amongst The Dead sounded too much like a horror thriller. But the tentative title was allowed to dawdle for a while, until Hitchcock decided on his final replacement. This ‘Cal York Jottings’ column is taken from the April 1958 issue of Photoplay. It appears that not everyone loved Vertigo as a movie title: 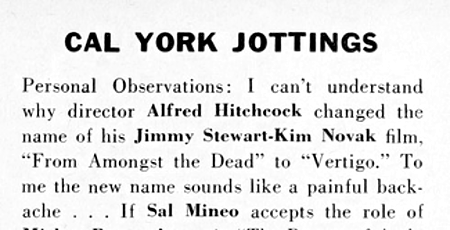 Finally, an article in caught Gary’s attention. A great many actor quotes in trade magazine articles originated from the minds of agents and publicity flacks. This piece from the September 1957 Photoplay reads like something that Vera Miles might have said: 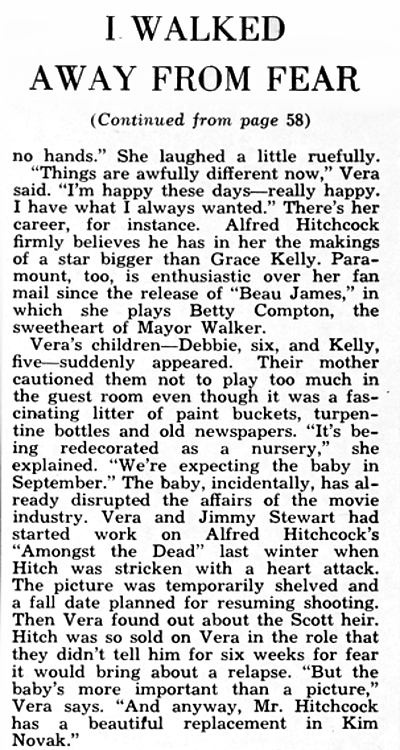 I guess I should catch up on my Hitchcock bios, what with the info that ‘Stewart and Miles’ actually began work on the film… which Gary assures me wouldn’t have been more than makeup and costume tests.  And Hitchcock is always characterized as angry at Vera Miles for getting pregnant, when this item claims that the film was also delayed by his heart attack. The words “Mr. Hichcock has a beautiful replacement in Kim Novak” fit Ms. Miles’ personality.